Does Brad Schwartz have enough money to pay his own lawyer?

Dr. Brad Schwartz went to Superior Court on Friday, May 13, a monumental location upgrade from his cell at the Pima County Jail, to contest his indictment on first-degree murder.

But Schwartz--charged in the Oct. 5 death of his former associate, Dr. David Brian Stidham--would soon learn that the focus had shifted to his assets.

Judge Nanette Warner noted that Schwartz's county-provided lawyer, Brick Storts, reported that Schwartz never signed an affidavit attesting to his inability to pay for his defense. And as pre-trial motions and procedures evolved, several lawyers with knowledge of Schwartz's assets have provided information to Warner, who will evaluate on May 31 whether Schwartz is entitled to have taxpayers cover his legal defense.

Handcuffed and shackled, Schwartz moved as quickly as possible to a chair at the defense table, stumbling once as his flip-flop snagged on the carpet. He was, not unexpectedly, pale, and his reddish-blond hair was cut in its usual style. Schwartz appeared eager, engaging and attentive as he talked with Storts and Ken Peasley, the disbarred former star prosecutor who is serving as an investigator on Schwartz's behalf.

In contrast, Ronald Bruce Bigger, the Indiana fugitive accused of taking payment from Schwartz to stab and beat Stidham, stayed out of the courtroom as long as possible and, though attentive to his lawyer Richard Lougee, wore a forlorn look. He was polite with a sheriff's deputy who loaned him a pen. He took a seat, across the room from Schwartz, where a juror will sit when the case goes to trial in November.

Rather than take up matters contained in Storts' voluminous motions about alleged grand jury miscues and the violation of Schwartz's rights, including whether his former lover Lourdes Lopez violated his attorney-client privilege, Warner assembled lawyers to the bench to discuss how to proceed, given the information that is drifting to her about Schwartz's finances. Warner brusquely told Lopez's lawyer Richard Martinez that the issue affected neither his client nor him and told him to take a seat. Slightly animated with laughs, smiles and frequent gesturing, Warner talked with Storts, Lougee and prosecutors Richard Platt and Sylvia Lafferty, of Pinal County, for more than 30 minutes before giving Storts and Lougee time to confer with their clients.

The only commotion occurred when Lopez, also the beneficiary of county taxpayer-financed contracts to represent a host of other broke criminal defendants, showed up and inelegantly squeezed and ducked past two news photographers to sit next to Martinez. She stayed just minutes, but long enough for Schwartz, whom she says repeatedly told her that he wanted to have Stidham killed, to get a good look at her.

Warner has kept documents and lawyers' communications regarding Schwartz's finances sealed. She said she will call those lawyers: Carl MacPherson, a lawyer assisting Schwartz's ex-wife in post-divorce support issues, as well as the latest lawyer to serve as statutory agent for Schwartz's ophthalmology business; Steven L. Bossé, the lawyer who prepared real estate, trust and corporate material for Schwartz; and Dennis Rosen, whose association with Schwartz and the family's estate planning is unclear.

Most of the property and financial assets appeared to go to Joan Schwartz, according to the agreement that is included in the couple's divorce file in Superior Court. Each kept money they had in separate bank, savings or money market accounts. Joan received all assets in seven investment accounts and four retirement accounts, including two of his, plus the profit-sharing plan from his ophthalmology practice, according to the settlement agreement.

Joan Schwartz also received the couple's North Pinnacle Ridge home, which she sold in January for $830,000, according to records on file at the county Recorder's Office. The couple borrowed $540,000 for the home, their second since moving to Tucson in 1998, in July 2001, records show. That is the same month they sold a Village at Ventana home to Dr. Sanjay Ramakumar, a University of Arizona urologist, for $308,000, a property for which they paid $253,500 in 1998, records show. Joan Schwartz bought a Shadows at Sabino home in January for $435,000, including $240,000 in cash.

As late as Valentine's Day, Schwartz was $40,949 in arrears in support to Joan Schwartz the couple's three children, ages 12, 9 and 4, court papers show. Monthly payments in spousal maintenance increased from $6,000 a month to $9,120 a month in July. The agreement allowed for modification, with a minimum payment of $4,000 a month, and called for payments through December 2008. Child support was put at $2,000 a month in July 2004, half of the monthly amount for the first six months.

The couple agreed to pay their own credit debt and to split other costs for their children, including college education.

Joan Schwartz also took control of two life insurance policies on Schwartz's life, one for $1.25 million that had lapsed and one for $100,000, according to the settlement. She was to make payments on both, including on the policy they were to each work to reinstate.

Schwartz retained assets in his Bank of Tucson accounts for Arizona Specialty Eye Care and for the Schwartz Building, LLC, labeled as Schwartz Realty in the separation agreement. It is known as the Schwartz Building LLC in filings with the Arizona Corporation Commission and served as the holding company for his medical office at 5190 E. Farness Drive.

Schwartz also retained whatever assets he had in his practice, including bank accounts, equipment, inventory and accounts receivable. Schwartz was president, vice president, secretary and treasurer for the company that was authorized to issue 10,000 shares. Only 1,000 were actually issued.

In the divorce settlement, Schwartz also kept two cars, a 1997 Toyota and a 2002 Cadillac Escalade. Mark Austein, who sold the Escalade to Schwartz, wants it back. In court papers, Austein's lawyer says Schwartz hardly made payments. Detectives seized the Escalade when Schwartz was arrested.

Pima County real estate records show most of the loans for Schwartz family property to be cleared and deeds released last year. It is not clear from those records what, if any, money Schwartz received.

The consistent portrayal has been that Schwartz is broke--too broke to keep his lawyer, Michael Piccarreta, too broke to pay his spousal and child support, too broke to have spending money in jail. Lopez put $200 in his jail account after his arrest and before she filed a Nov. 4 order of protection against him. And another girlfriend, Kristin Leigh Pedersen, has put $200 in his account and paid for a newspaper subscription, according to court papers.

Pedersen, 33, and Lopez, 36, have bitter feelings toward one another, but apparently each is friendly with and respects Joan Schwartz, according to court papers and Lopez's statements to detectives. Lopez said she put money in Schwartz's jail account as a favor to Joan Schwartz.

Pedersen, in a Dec. 3 letter to Schwartz, talked about his wife and his financial status.

"I spoke to Joan earlier. She had to go when Mike P. (Piccarreta) was calling her. I guess he wanted her to make a list of all your debt. I guess it protects your building and justifies your 'free' legal stuff--Brick--What is it called--court-appointed attorney?"

Piccarreta told prosecutors last year that Schwartz was doing well, grossing $30,000 a month in a restyled practice that was growing.

Storts is able to bill the county at $75 an hour, substantially less than what private counsel would charge a wealthy client. Storts has been paid $18,957 through April 25, county records show. Storts may also bill for investigators and experts.

After Warner's decision to explore Schwartz's finances, Storts wondered to the Weekly if the judge would go so far as to "take money from Schwartz's children."

Oro Valley Murder Suspect Out of Jail on Reduced Bond 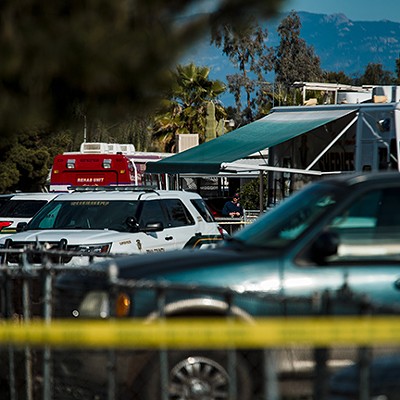