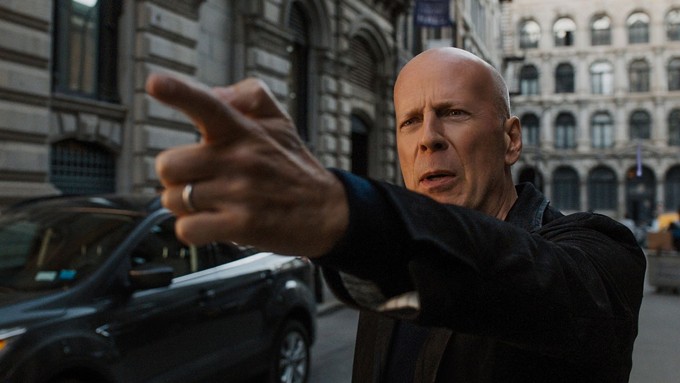 Remaking the film with Eli Roth at the helm and Willis in the Bronson role actually seemed like potential nasty fun. Sylvester Stallone gave the remake possibility some steam years ago, but subsequently chickened out. John McClane himself stepped into the role, and the remake started to take shape as a worthwhile endeavor for those of us who like our movies crazy.

Sadly, Willis is phoning it in here, and too many horribly acted scenes reveal that Willis and Roth probably weren't gelling as an actor/director combo. Willis often seems tone deaf in some of the movie's more dramatic scenes, and just plain bored for the remainder. When Willis gives a shit about the movie he's making it shows. When he doesn't care, and that seems like quite often in many of his recent projects, he is zombie-like.

The original Death Wish (1974) starring Charles Bronson is a hard watch these days. Apart from its racist depictions of criminals and extremely dated Herbie Hancock soundtrack, it's also poorly acted by Bronson. It is, however, worth seeing for walk-ons by Christopher Guest as a police officer and, most horrifically, Jeff Goldblum as Freak #1. They would both go on to do much, much better things.

It was Goldblum's acting debut, in which he took part in the infamous scene where architect Paul Kersey's (Bronson) daughter and wife are attacked. It's a terrible scene, and almost comedic more than 40 years later. For the remake, that attack scene is mellowed out a bit (nobody gets their ass spray painted), with Elisabeth Shue as Mrs. Kersey and Camila Morrone as their daughter. As in the original, one of them doesn't survive the attack, and Paul gets a taste for weaponry and vigilante justice in the aftermath.

Unlike the original, many of Kersey's crimes are not random. This time he's out for revenge, playing a detective of sorts as he seeks out and eliminates his family's attackers, while slipping in the occasional drug dealer execution. Bronson's Kersey was an architect living in Manhattan, while Willis's Kersey is an ER doctor in Chicago. No actor has ever looked sillier in scrubs than Willis.

Roth makes a good-looking movie, and his films (when on point) have a good, sinister humor streak to go with the carnage. That doesn't happen this time. The attempts at dark humor fall flat, and only Vincent D'Onofrio as Frank, Paul's sad brother, hits the right notes with his performance. D'Onofrio, unlike Willis, seems to be giving it his all while Willis acts like somebody with true contempt for his director and really swell dinner reservations.

Dean Norris (Hank from Breaking Bad) shows up alongside Kimberly Elise as the investigators on Kersey's trail. They try to get a couple of laughs, but they can't rise above the mirth. Shue and Morrone are okay in their smallish roles, but don't have enough screen time to really register.

There is one moment in this movie that works: the final shot where Willis recreates Bronson's point and shoot moment from the original. Willis actually looks like he's got the vibe of the project right, and actually looks interested in the shot. It's the few seconds in this movie where he properly earned his payday. He should've grown a pencil mustache for this one.