Dawn of the Deadpan

Jim Jarmusch sinks his teeth into the zombie thing 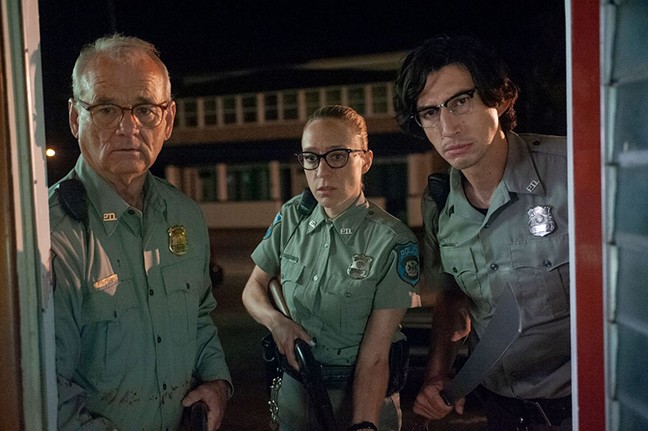 The zombie genre gets Jarmusched with mild levels of success in The Dead Don't Die, an often funny, sometimes scary and always amusing horror-comedy effort from director Jim Jarmusch.

Jarmusch has done horror before, most notably with his atmospheric vampire flick, Only Lovers Left Alive, and, some could argue, with the disturbing death meditation Dead Man. His latest effort is as strongly satire as the director has ever been: The world is falling apart politically, socially and environmentally, and its inhabitants are too slow and dimwitted to really do anything about it.

Bill Murray, Adam Driver and Chloe Sevigny play sheriff Cliff and his deputies Ronnie and Minnie in a typical American town called Centerville. The pulse of the town is severely laid back and barely beating, with much of one's day revolving around when to get that good coffee and donuts from their cultural hub, the local diner.

Due to polar fracking, the earth spins off its access and the dead begin to rise. The days become longer, the electronic gadgets we rely upon go dead, and people start getting unsolicited neck bites from formerly live neighbors. Characters like those played by Murray and Driver react in a way that is so disorganized and disconnected, they practically deserve to die.

This, perhaps, is a not-so-veiled statement about our current administration's strange attitude towards global warming. Actually, there's no doubt: Jarmusch hates Trump and this is the first anti-Trump zombie movie. Steve Buscemi plays a racist townsperson who dons a red and white MAGA hat, except his actually says "Make America White Again."

The pacing of this movie is really slow...Jarmusch slow. In fact, the pacing is so slow that the George Romero-like zombies that are lumbering around are almost sprinting compared to what is going on around them. Your ability to like this film depends very much upon your willingness to let the things happening on screen linger and, in some cases, really drag out.

The film does contain a moment of genuine terror when a zombie couple take out two waitresses at the diner. The zombies feast upon the dying with (I'll reference the zombie master again) Romero-like goriness, right down to intestine chomping. What distinguishes the moment as ultra-creepy is one of the victims not dying immediately, and letting her agony be well known verbally.

The zombies doing the diner killing are played by Iggy Pop (former Jarmusch collaborator) and Sara Driver as rock groupies with caffeine addictions. Live flesh is well and good when it comes to feasting, but what they really need is a good cup of joe, like so many of the multitudes currently crowding Starbucks and indie cafes across our great nation.

Murray and Adam Driver are both very funny, with Murray's Cliff representing the old school, I've-had-enough-of this-to-the-point-where-I-will-barely-react part of society, and Driver's Ronnie providing the semi-hipster outlook. It is Ronnie who calmly declares that they are in the midst of an apocalypse while never losing his deadpan face. He's a lot younger than the equally deadpan Cliff, and will probably catch up to Cliff's level of disinterest very soon.

Other Jarmusch stalwarts include Tilda Swinton as a samurai sword-wielding funeral home director, a role only Swinton could play. Tom Waits (Down by Law) plays the mystic homeless guy commentating on Centerville's demise, of course. Who else would he play?

As a fan of Jarmusch, even I couldn't get past the pacing at times. A couple of days later, when I reflected upon the picture, it hit me that I liked the movie a lot more after I saw it then while watching it. His films tend to get that sort of delayed reaction out of me.