The downward spiral in Escape From Tomorrow doesn't pay off, but the film should still inspire new filmmakers

The past decade has seen an exponential growth in digital filmmaking technology, so that almost anyone with a little talent and want-to can make a short film that actually looks at least halfway decent.

Production costs—and therefore the costs of entry into filmmaking—have sharply declined for indie directors and producers. Case in point: The first Paranormal Activity movie, shot for just a few thousand dollars, has the highest profit margin in motion picture history.

This democratization of filmmaking will likely continue. At the very least, it will help amateur filmmakers create their visions in hopes that funding for distribution will follow. A good example of what anyone can do is Escape From Tomorrow. The final production cost is somewhere in the half-million-dollar range, thanks largely to editing outsourced to a firm in South Korea. But to actually shoot it? About 10 grand. Director Randy Moore bought a pair of Canon EOS 5D Mark II cameras and an EOS 1D Mark IV—fairly expensive digital cameras with the capacity to shoot HD video—and went to Disney World.

An exercise in guerilla filmmaking, Escape from Tomorrow charts one man's slow descent into madness, accented by the quicksand that is modern consumerism. Shot almost entirely at Disney properties, but with zero permission from the notoriously by-the-book (and litigious) Walt Disney Co., Moore has pieced together a pretty gorgeous black and white film that should serve as an inspiration to aspiring filmmakers everywhere.

On the last morning of the big family vacation, Jim (Roy Abrahamson) stands on the balcony of his hotel room, Magic Kingdom in the background, talking to his boss on the phone. It's a "transitional period" at the office, he's told; the company's moving in another direction. Rather than let his family know the bad news, Jim internalizes it, setting the stage for a truly awful day at the theme park. Before long, he sees strange visions while on the rides and is haunted by a pair of French teenagers. Are the girls symbolic? Surely, but they're also real, leading to that classic, universal exchange between father and son.

"Is Mommy pretty," asks his young son. "Yeah, she's beautiful," Jim agrees, qualifying, "not in the classical sense, but more in an Emily Dickinson/bookish/Tina Fey kind of thing."

Jim finds himself helpless in this strange and dementedly happy place, taking darker turns than Clark Griswold, his obvious antecedent. He's a man suddenly without prospects, trapped in this life as a father and husband but no longer a man unto himself. His attempts to recapture that person in his past—by skirt-chasing the French teens and making time with a mysterious yet eager woman several years his senior—show a man hitting rock bottom.

His way out of that downward spiral is not what you might expect, nor is it really a very strong conclusion to the film. Moore's tone changes, incorporating brief nudity and scatology, and Jim's state goes from bizarre to borderline fatal. What a shame.

But mostly, Escape from Tomorrow is a positive. The black and white cinematography adds a haunting layer of unease to the Disneyscape, with rides and characters taking on distorted and bleak characteristics. Of course, it's also very practical. You don't have to have as much color correction with black and white photography, your light sources can be more varied and unforgiving and, in general, you can get away with more. Obviously, because Randy Moore shot this film while violating Disney rules, he didn't have time for complicated setups. That makes the seamlessness of the production all the more noteworthy. Green screen was used occasionally and it's really awful, but otherwise, this is a really well-assembled film.

The cartoon elephant in the room, of course, is how Disney let this film find its way into theaters. The studio appears to be ignoring it altogether, perhaps thinking that pursuing legal action would just make more people see it. Some intellectual property attorneys, however, have chimed in to say that Disney would have a hard time winning a lawsuit, anyway. That argument contends that this is a societal critique more than a conniving way to profit off the Disney name, and that it falls somewhere between satire and the holy grail of modern copyright law, fair use.

After you let all that soak in, Escape From Tomorrow is still one of the more interesting films of 2013. Just the fact that it could happen at all makes it a big curiosity in a year with noticeably few of those. True, the story of how it got made will probably last longer than the film itself, but it's also a clarion call to anyone with a camera and a good idea: Go make your movie.

Escape From Tomorrow is not showing in any theaters in the area. 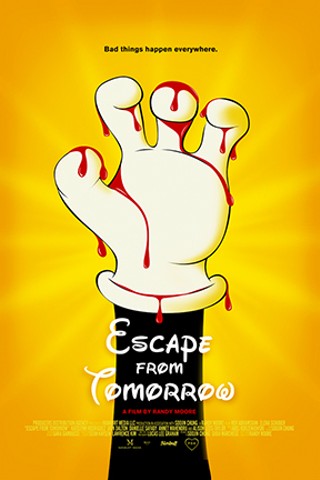