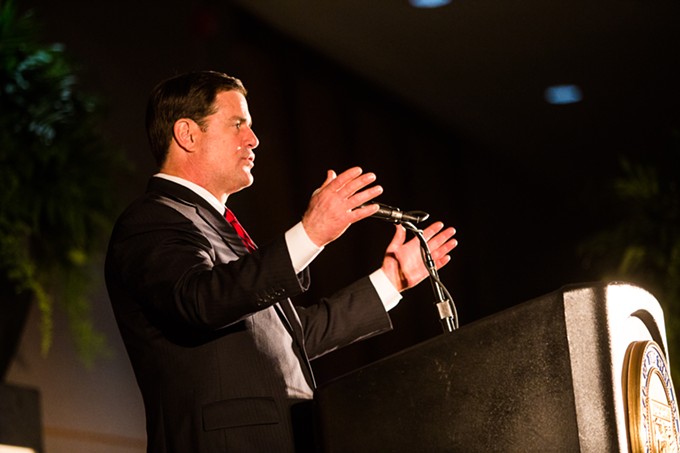 J.D. Fitzgerald
Doug Ducey at his 2016 State of the State in Tucson.

I once told a friend of mine that 50 percent of all Americans will never read a book after their formal education comes to an end. He chuckled and said, "Ha! Make that 51 percent!"

So, not only did he not read, he also sucked at math. I thought of that the other day when I was contemplating setting up a website on which to comment on the exciting developments to come this election year. I've always enjoyed Nate Silver's 538 website (named for the number of electoral votes in a presidential election). I was thinking of calling mine 539 so that people might stumble upon it by accident. Nate Silver might get mad at that, which initially wouldn't bother me because Nate Silver looks like what would happen if Woody Allen had a love child with a smaller, weaker version of Woody Allen. But Nate Silver probably knows some big, strong people and some lawyers, as well, so I thought better of it. Plus, I really like Nate Silver.

While I'm trying to come up with a name for the website (and, you know, the website itself), I'll offer these bold predictions for the upcoming year.

God help me, but I have KNST on one of the buttons on my car radio. If I'm driving around on a weekday, I'll listen to drug addict Blowhard No. 1 in the morning or fake-ass Catholic Blowhard No. 2 in the afternoon. On the weekends, if it's near the top of the hour, I tune in to hear the Fox-slanted national news. When that gets over, I keep expecting to hear the out-of-place funky music that introduces the local news segments on weekdays. (The music is out of place because the average listener of right-wing talk radio these days gets pretty darned uneasy when they hear stuff that has that dreadful Negro rhythm.)

Since they don't have local news on the weekend, they play these one-minute spots featuring the local morning drive-time guy. For the past several—oh, I don't know, FOREVER—they've been running this one where he wonders how the national media are going to plotz over the ascension of Carly Fiorina and Ben Carson.

Carly Fiorina rode that completely made-up abortion story to the adult table for a few weeks, but has now been permanently kicked to the curb. As for Ben Carson...dude, really?! When this guy goes through that scanner at an airport, it doesn't register green or red, but rather just a question mark. The TSA employee probably wonders, "What was that? Did a barely perceptible light breeze just pass through the building?"

My first bold prediction is that KNST will take that spot down sometime before November. (And really, nobody cares that she's a woman and he's black. They're just both bad candidates, each one worse than the other.)

I predict that Arizona Gov. Doug Ducey is going to crap all over Arizona's public schools, teachers, and students ... again, and then try to paint himself as a savior of some sort. The fact that he was stunningly vague about numbers in his State of the State Address tells me that his masters at Koch Industries don't want all of that excess money that the state has to go to kids whose parents didn't have the common sense to be born rich.

He already took credit for a crappy plan that takes some money from Arizona's future schoolchildren, switches it from one hand to the other, and hands it over to today's schoolchildren. In doing so, he fails to mention the fact that the courts were about to take the money from the state's surplus (instead of from the land trust) and also dodges the part about how the money that's going to the schools is only a fraction of what the schools are owed by the tax cut-worshipping losers in the State Legislature.

I'm afraid that his anti-public school actions (including proposed unconstitutional government loans to charter schools) this year will be even Douche-ier than what he did last year.

I predict that Martha McSally will be re-elected in Congressional District 2. Her campaign slogan will be "Martha McSally: She's Not Horrible." That should be enough to carry her to victory over whichever dispirited Democrat emerges from the primary process to face her.

I predict that if those we-want-something-for-nothing squatters are allowed to stay in that government facility in Oregon for an extended period of time, they might actually learn the difference between Constitution and constipation.

I'm not in total agreement with the Black Lives Matter movement (some of the people say some really stupid things), but I do agree with the guy who said that if the people occupying a government facility were all black, they would have been forcibly removed before the sun came up the next day.

A couple weeks ago, I drove from Page, Arizona to Cedar City, Utah. I was overwhelmed by the Big Nothing that's out there. I (and a vast majority of Americans) want it to remain in federal hands and protected for all time. I want my great-grandkids to make that same trip in their solar-powered hovercrafts and feel the same exhilaration that I did.

Could somebody please tell Jive-Ass Bundy that he and his redneck homies are on the wrong side of history and the law?