Following a week when 109,318 fans watched a match in Michigan, Tom continues his soccer jeremiad

It's been more than three weeks since the end of the World Cup. I'm not going to hate on it. It was pretty exciting, except for, you know, most of the games. Like the majority of American sports fans, I find the period between the end of the NBA playoffs and the start of football season to be a bleak time, indeed. The World Cup was a spectacle and I enjoyed it. Besides, if my only viewing choices are between two countries playing soccer on a world stage and a baseball game pitting the Arizona Diamondbacks against the San Diego Padres, I'm like "Yay, Cameroon!"

• Having caught the first-half scoring explosion in the Germany-Brazil semifinal game, I anxiously watched most of Argentina-Netherlands game the next day. Except for the shootout at the end (which, quite boorishly, appeals to my American sense of "Can we please have a winner sometime today ... please?"), the 0-0 game was like having a root canal performed rectally.

• On Oct. 13, it will be three months since the end of the World Cup. I am going to ask 100 random people these three questions:

What's the only country that the U.S. beat in the World Cup?

Other than goalkeeper Tim Howard, name a player on the U.S. team.

What country knocked the U.S. out of the World Cup?

What percentage of respondents will get all three correct? I'm guessing it will be in the 0 to 1 percent range. I'll even give you a reminder. The answer to the last question is Belgium. And no, Tea Party morons, Belgium is not the same as The Netherlands. Holland is The Netherlands, which is why they call the people who live there Dutch.

• The magazine The Week runs a contest on its back page every issue. A couple weeks ago, it noted that the World Cup championship game was watched by about one-fifth the number of Americans who watched this year's Super Bowl game. It then asked, "Describe how you would change soccer's rules to make the game more appealing to Americans."

The winner was "Shorten it by 89 minutes," followed by "Substitutes may enter driving monster trucks," and "More biting."

The real answers should have been "Add more refs and use instant replay to kick people out of the game for flopping and faking injuries." Soccer will never be taken seriously by Americans until they get rid of that nonsense. It's really embarrassing.

• They kept talking about how Argentina is the "most European" of South American countries. That just means that of all the Nazis and Fascisti the Vatican helped smuggle out of Europe, most ended up in Buenos Aires.

• Much has been made of the World Cup TV ratings in the United States, which were quite impressive, especially compared to previous Cups. However, it was like a perfect storm for the TV outlets. Rio de Janeiro is only one hour ahead of the East Coast of the U.S., so the times were friendly. There was an unprecedented saturation, with games shown on ABC, ESPN and Univision. Plus, the U.S. team didn't totally stink out loud (although the American squad did go a yucky 0-2-1 in its last three games).

Unfortunately, the TV folks are probably going to have to wait at least 12 years for the numbers to be that good again. Moscow is 11 hours ahead of Tucson (or 13 hours behind plus one day, if you want to get that International Date Line Brain Freeze). Doha, Qatar (the mega-controversial 2022 site) is 10 hours ahead of Tucson. That means games starting at 4:00 or 5:00 in the morning, our time. Plus, Qatar, which has average daytime temperatures in the 110 degree range, is talking about moving the Cup to December, where it will compete for TV viewers against American football, college and professional. Good luck with that.

• Despite all the wishin' and hopin' (God, I still love Dusty Springfield!) by socceristas, the World Cup really is indeed just like the Olympics for Americans. Comes around every four years, has some big moments, then quickly fades into the background. Nice summer diversion, but that's it.

• The announcers kept talking about how the U.S. team has to adopt some other country's style. Why? Remember in the original "Rollerball" how each corporate city-state had its own style of playing the game? Why can't Americans come up with their own unique style—athletic, creative, non-flopping ... fun?

• If Vladimir Putin is still running things in Moscow in 2018, the World Cup in Russia will be the 21st century version of the Hitler Olympics.

• My daughter's engineering firm (she doesn't own it; she's just the best engineer in the place) has a team in a co-ed indoor soccer league on Saturdays at the Tucson Indoor Sports Center. There are a few guys in the league who are very, very good at soccer. Unfortunately for them, at this place and time, on the Cool Meter, that's the equivalent of being able to cook varmint over an open fire.

• Oh yeah, I won a World Cup pool. According to ESPN (which runs the pools), I was in the 98.9 percentile in the country, which is funny, because I usually tend to over-think things when I try pools that involve real football.

It's pretty hard to over-think soccer. 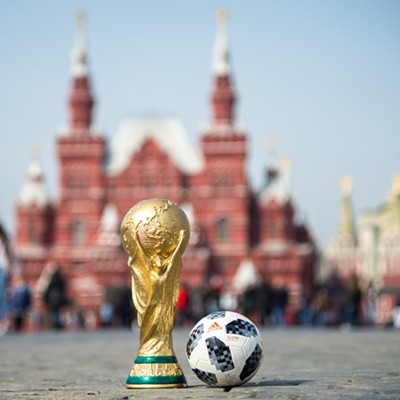