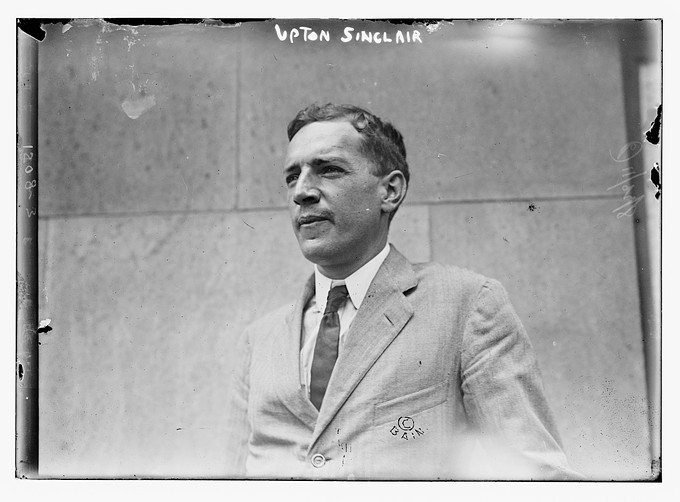 United States Library of Congress's Prints and Photographs division
The vote tallies of the primary election began coming in and it was becoming clear the result some had only dreamed of and many others had feared was about to happen. The old white man with the unruly shock of gray/white hair, the openly avowed Socialist, was about to become the nominee of the Democratic Party. Republicans, terrified of the potential consequences of handing the reins of government to a Socialist, immediately began marshaling their forces for all-out political warfare. Meanwhile, a substantial number of Democrats, equally terrified by the prospect of a way too-far left candidate losing what should have been a slam-dunk election, offered tepid support while exploring other options.

It was 1934 and muckraking author Upton Sinclair was running for governor of California.

It had been nearly 30 years since the publication of his most famous book, The Jungle, in which the depiction of conditions in Chicago's meat-packing plants were so graphic and so scandalous, it prompted the U.S. government to establish the Food and Drug Administration. He jumped around from one cause to the next, twice ran for governor of California as a Socialist (getting about 50,000 votes each time), and used to love to tell the story about how he had been arrested in 1911 for playing tennis on a Sunday.

In 1933, Sinclair changed his party affiliation from Socialist to Democrat and produced his EPIC (End Poverty In California) plan. The plan, outlined in pamphlets that sold for pennies, took California by storm. He won the Democratic primary in a landslide and since it was held the last week of August, he faced only a two-month sprint to the general election. Early betting lines had Sinclair as a 2-1 favorite. He peppered his appearances with killer quotes like, "It's hard to get a man to understand something when his salary depends on his not understanding it."

Sinclair's surge had Republicans reeling. The GOP's candidate was Frank Merriam, who was the acting governor, having taken the office following the death of James Rolph. Merriam had the personality of a Nebraska zip code and party leaders nixed any ideas of having him debate the erudite and clever Sinclair. To have any chance of stopping the Socialist from taking office, it would require an overwhelming assault and a new form of political attack. The campaign would later be referred to as the birth of media politics.

First to come out against Sinclair were the movie studios, who at first threatened to move their entire operations Back East and then came up with a diabolical approach, the echoes of which expanded a thousand-fold over the following decades and which now play an oversized role in today's politics. The studios had always produced newsreels that theater owners were forced to run in conjunction with their features. What the studios did to Sinclair, however, was that they produced fake newsreels, the most famous of which showed "bums" (portrayed by studio-hired actors) getting off a train and telling the "interviewer" that they were coming to California to live in the Socialist utopia that Sinclair was going to create for them.

The studios then unilaterally began taking 20 percent of the paychecks of every employee from the top stars down to the janitors and giving the money to the Merriam campaign. James Cagney, who was the No. 1 box-office star at the time, told the studio that if they took any of his money to give to Merriam, he would donate the rest of his pay to Sinclair and campaign for the Socialist, as well. The studio back down.

The newspapers then jumped in. The five newspapers owned by William Randolph Hearst (who had been in Germany courting the newly "elected" Adolf Hitler) had more than half the readership in the entire state and they savagely attacked Sinclair.

President Roosevelt, hoping for a Congressional landslide in November, refused to help the author. The New York Post offered this FDR poem: "This is the question that's thinning my hair. What'll I do about Upton Sinclair?"

Others flocked to Sinclair's aid. Dorothy Parker, the undisputed star of the Algonquin Round Table, was honeymooning in California when a magazine for which she wrote insisted that she return to the East Coast. She replied, "I'm f—-ing busy, and vice versa."

Late in the campaign, a Progressive Party candidate, Raymond Haight, entered the race, stating that Merriam was a flop and Sinclair was far too radical. Haight ended up winning 14 perent of the final vote, while Sinclair, having been done in by the media campaign, finished 13 percent behind Merriam.

The men who ran Merriam's media campaign would later mold Richard Nixon's Red Scare campaign for the Senate in 1950 and then help Ronald Reagan win the governor's race in the 1960s.

Foreshadowing the reaction of some people today who love their Social Security and Medicare but blanch at the mention of socialism, Sinclair reflected on his failed race with, "The American People will take socialism, but they won't take the label."