Now That’s He’s Been Acquitted, Trump Can Get Back To His Ever-Growing Enemies List 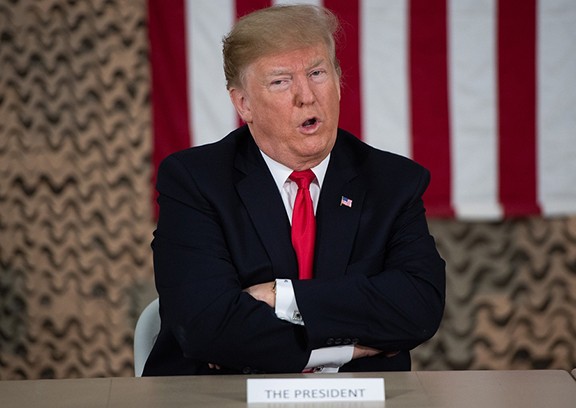 Bigstock
According to the old proverb, they that sow the wind shall reap the whirlwind. Well, all you Trump cultists who used to be part of the now-defunct Republican Party, that whirlwind is coming your way. Oh, it's a long way off because the now-totally unrestrained Donald Trump must first lay waste to America and democracy and Mitt Romney. But when he runs out of rivers to pollute, syntax to butcher, and brown-skinned families to destroy, he'll come for you.

It is said that "When Alexander saw the breadth of his domain, he wept for there were no more worlds to conquer." That sounds all Bibical and stuff, but it's actually Hans Gruber (Alan Rickman) in Die Hard.

Trump already owns the Senate. He's got so many noses up his butt that when he has flatulence, white people (and Tim Scott) go flying like confetti. Can you imagine being Tim Scott (the African American senator from South Carolina)? You're supposed to be this principled conservative, a new generation role model for young African Americans. Instead, you're just another suck-up to a racist president who hands out what used to be a prestigious award to a guy who got rich and famous by spouting racist invectives on the radio. If this were the 1960s, Scott would be the water boy for one of Adolph Rupp's teams.

Trump is now completely free to rape and pillage whatever he wants—people, places, things, institutions, manners, decorum, decency...whatever. Apparently, he has always been able to do so because nobody on his side of the aisle has the testicular capacity to take a moral stand.

Look at Ted Cruz, who is supposed to be some kind of Texan. Trump insulted Cruz's wife and then claimed that the Senator's dad had something to do with the JFK assassination. Cruz should have threatened to beat Trump's ass, but instead, he now kisses it on a regular basis.

Marco Rubio has faded into the background and Lindsey Graham is Trump's biggest cheerleader. But they'll all be on Trump's list, eventually.

• Democrats, Canadians, independents and people who read the Arkansas Democrat-Gazette newspaper. (That last group will be safe for a while because Trump will think that they live in Kansas, along with the Chiefs team that won the Super Bowl. What an idiot!)

• Jews, Catholics and Jews. I find it hilarious that people think that Donald Trump gives a crap about Jewish people. Seriously, what do you think the over/under number is for the number of times Trump has used the term "kike" in his lifetime? Five thousand, maybe. He's a rich, spoiled New York white socialite who comes from a German background. Trump has probably used more Jewish stereotypes than Mel Brooks...but Brooks is allowed.

• People who don't leave hickeys when they kiss his ass. These include the Martha McSallys of the world. I remember when Martha had some integrity, some brains and some guts. But then she developed vertigo trying to walk a tightrope between Trump and decency. She has now sorta backed Trump (but not enough for his taste) and she's toast. She's got about as much chance of winning election in November as the proverbial one-legged man in a butt-kicking contest.

• He'll quickly discard the shameless African Americans and other minorities who agree to act as his props on national TV in exchange for getting their kids into some school. Did you happen to hear Trump use the dog-whistle term "government school" during his SOTU speech? That's rather odd since a significant portion of his rural base send their kids to public schools. That whole "government school" nonsense is rich white people crapola spewed by the Betsy Devoses of the world.

• Mitt Romney. This isn't going to be so easy. For almost his entire presidency, Trump has been a net negative in Utah. Superficial types like Mike Lee pump him up, but a whole lot of devout Mormons find Trump to be vile and vulgar. Romney might not get invited to Mar-a-Lago anytime soon but they don't serve milk there, anyway. He's in no real trouble.

Then Trump will turn on his sycophants.

I can see Trump going after Mitch McConnell's mail-order bride, Transportation Secretary Elaine Chao. She's probably too old for Trump and she's not a fake blonde and hasn't had nearly enough plastic surgery for the Molester-in-Chief's taste, but Trump might grab her by her private parts just to show that he can.

And what would (could) McConnell do? Nothing. He's already shown that he's Trump's little bitch boy. I would think that if I were in charge of what used to be (but no longer is) the world's greatest deliberative body, I would want to protect and maintain that designation and not completely knuckle under to the Executive Branch. I would have let more Republicans vote guilty, allowing the vote total to creep into the mid- to high-50s, leading to Trump's acquittal while, at the same time, letting him know that if he ever staggers down Dumbass Lane again, that number could get dangerously close to 67.

Whether you stand up to him or bow down before him, Trump has no respect for anybody. So if you have any integrity whatsoever, you might as well stand up to him. But, so far, almost no one is willing to do so.