In the spirit of the season, Tom tries to see things the way a Trump supporter does 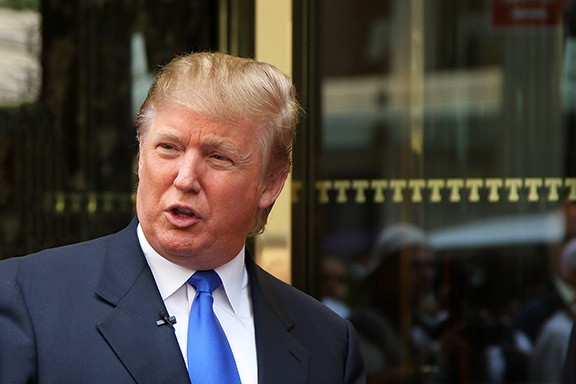 Bigstock
The other day, I was listening to right-wing talk radio (as is my obsession), and I heard a rather level-headed caller suggest that liberals should at least try to see things from the perspective of a Trump supporter. Two or three years ago, that would have been a reasonable request. But today, after turning down countless opportunities for Never NOT Trumpers to temper their idolatry with just a dash of decency and/or common sense, it seems to be a fool's errand.

But later that day, I was driving around, listening to the greatest Christmas song of all time, Karen Carpenter's beautiful and haunting "Merry Christmas, Darling." I thought, "Why not give it a try? The temperature is in the low 70s and UA football is over, so it must be close to Christmas. Besides, I heard the other day that Nancy Pelosi prays for Donald Trump.

(I'm sorry. I've mentioned that my mom came from Italy, my dad from Ireland and my wife's people from Spain and Mexico, so I've always considered myself to be an industrial-strength Catholic, but there's no damn way I could pray for that vile clown. There are limits to my Catholic-ness-iosity.)

But I can try to see things from the perspective of Dave, the Confederate flag-waving guy who works at the Sack O' Suds in I Married My Cousin, Alabama. Or I'll be Sen. John Kennedy from Louisiana, the most inappropriately named legislator of all time! I'll just bang my head against the wall a few times until the room starts spinning and then we'll start with an easy one.

Anyway, so they give it to this teenage girl who cries about climate change, which our PRESIDENT has assured us doesn't even exist. It's just a hoax started by Big Coal or Big Oil. (I'm not sure; I wasn't really listening to that part at the rally.)

And now people are getting all butt-hurt because The President congratulated the girl. What's wrong with telling her to chill and go see a movie? I mean, he didn't say that he was going to grab her by her private parts.

• The PRESIDENT was forced by some liberal judge to pay $2,000,000. (I think that means two million dollars.) I haven't seen that many zeros since our 11-year reunion from Jefferson Davis All-White Academy. We had to postpone it a year so some of our student government leaders could finish their sentences. Anyway, this liberal judge (who was probably a Jewish Mexican) forced The PRESIDENT to pay all that money because he claimed that The PRESIDENT stole that much from his own charitable foundation.

Now, how can somebody steal from their own charitable foundation? It's their charitable foundation. I heard he used it to pay some bills and he bought a six-foot-tall portrait of himself. That's probably a good investment. You know how art gets more expensive over time, especially if it's painted on black velvet.

• People are always calling him a liar. But I don't think he lies. Why would a rich person and a PRESIDENT ever need to lie? He says that he doesn't lie and I believe him. Besides, everybody lies. Oh wait, I didn't really think that one through. I'll come back to it.

• Now they're trying to impeach him. It's ridiculous in so many ways. I mean, he followed the tried-and-true pattern and kept to the Five Step Policy.

1. Deny that you ever did what they're accusing you of.

2. Employ the what-about-ism (e.g. What about Hunter Biden?)

3. Start leaking names from your list of people whom you can later throw under the bus, if need be.

4. Suggest that you might have done it, but people got the details wrong.

5. Admit that you did it, but point out that there's nothing wrong with having done so.

And the sixth part of the Five Step Policy is use the word "perfect" a lot.

Besides, I believe that he was looking for corruption in that country. There had to have been some serious high-level corruption. For example, who stole the "The"? For as long as I've heard about that place, it was always called "The Ukraine." Now, all of a sudden, it's "Ukraine." That sounds clumsy. I want to know what happened to the "The." While you're at it, its capital used to have two syllables, as in Kee-ev. Now, it's just Keeve. There's corruption all over that damn place and our PRESIDENT is just trying to be the leader of the World.

It's really not that hard to defend The PRESIDENT. He's simply the greatest...Wait, they're playing "Merry Christmas, Darling" by The Carpenters on the radio. It's such a pretty song. I think even the most pinko Commie leftie would agree with me that this is a great song.

Just imagine how great it would be if Kid Rock did it.