If Tucson Ever Gets Back in the Movie Biz, Tom Has Some Elevator Pitches 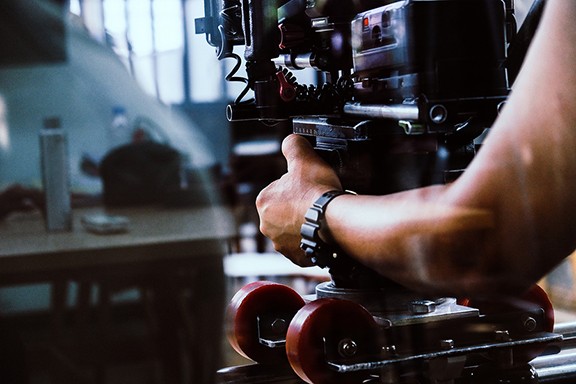 For those of you who are relatively new to our fair community, it may come as a surprise that they used to make movies in Tucson. There were successful movies (Richard Pryor in Stir Crazy—one of his few movies that didn't stink); really, really, REALLY bad movies (Don Johnson and Mickey Rourke in Harley Davidson and the Marlboro Man); and artsy, tear-jerker movies (Alice Doesn't Live Here Anymore, which spawned the worst TV sitcom of all time). And yes, Alice was worse than Three's Company, if only by a little bit.

John Wayne made the same movie three times in Tucson and just called it different names. Two sports movies that didn't suck—Tin Cup and Major League—were filmed in Tucson. Parts of the first film ever to win the Academy Award, Wings, were filmed in Tucson. Peter Fonda and Dennis Hopper smoked all of the weed in Arizona while passing through Tucson in Easy Rider. Parts of Tombstone were filmed here, as well as much of The Gunfight at the OK Corral, the Kirk Douglas-Burt Lancaster movie that should have been subtitled Let's See How Many Historical Inaccuracies We Can Cram Into One Movie. In the movie, the climactic gunfight lasts about a half-hour instead of the actual half-minute and somehow culminates on the upper floor of a hotel when Billy Clanton (Dennis Hopper again!) refuses to surrender and gets shot down like a dawg!

Yes, for quite some time, Tucson was the film capital of Pima County, if only because the scenic Empire Ranch location is in Santa Cruz County. But then, through some serious bungling on the part of state and local governments, coupled with the capriciousness of the film industry, it all went away.

But what if we could get it back? I had this weird thought the other day when somebody told me the plot(s) of the last two Avengers movies. The first Avenger movie drove me nuts. They had to come up with a threat to mankind that could only be defeated by the combination of a Norse god, a guy with a bow and arrows, an indestructible monster, and a woman who can strangle someone with her thighs.

Anyway, at the end of Infinity War, the evil Thanos snapped his fingers and half of all of the people alive blinked out of existence. I immediately envisioned Regina Romero taking the oath of office as Mayor of Tucson and having half of the residents of the city disappear. That's absurd, of course. That number can't possibly be more than 15 or 20 percent.

My mind then spiraled to other movies that we could remake starring local people. We could do The Godfather, with Raúl Grijalva as Don Vito. Adelita could be Santino, the hot-headed but take-charge offspring. Fredo would probably be Regina Romero again, which, I guess, shows her versatility. She would be taking a role immortalized by John Cazale. Do you know that in his too-short movie career, Cazale (who died of lung cancer at 42) made only five movies, but all five were nominated for Best Picture and three of them (the first two Godfather movies and The Deer Hunter) won the Oscar. He also appeared posthumously in The Godfather, Part III, which was also nominated for Best Picture.

Contrast that with Kathy Bates, who won the Academy Award for Best Actress and then appeared as Adam Sandler's mom in The Waterboy, which included a scene of Bates playing badminton with a donkey.

We could re-do The Wizard of Oz, with Channel 13's weatherperson Lisa Villegas, who got picked up by a storm of controversy and deposited in Tucson. I have to say that what happened to Villegas in Dallas was largely nonsense, but then again, television executives are quite often complete idiots.

Villegas has this Gee-Whiz quality about her like Dorothy Gale and she occasionally gets stuff wrong. This past summer, she said that there was a 20 percent chance of rain and then said that 20 percent of us were going to see rain. WRONG! What that means is that on those days when the conditions were exactly the same as the current day, it rained 20 percent of the time. Having watched numerous weatherpeople over the years, I get the feeling that I could get a degree in meteorology by taking one of those intersession classes that the UA (not UArizona) offers between the end of the fall semester and the first day of classes in January.

Plus, whenever Villegas laughs, I hear Margaret Hamilton saying, "I'll get you, My Pretty!"

We could do the classic Hoosiers. Sean Miller would be perfect as Coach Norman Dale, seeing as how they both like that boring, slow-down, white-people basketball. I really appreciate the fact that Miller's teams play lock-down defense, but when you've got the horses, you've got to let them run. Coaches aren't supposed to say anything about fellow coaches, but I have a higher winning percentage than Coach Miller, so let's just consider it a suggestion.

I've also got the perfect movies for Senator Martha McSally, UA football coach Kevin Sumlin, Jim Click and County Supervisor Ally Miller. But I'm out of space, so we're just going to have to wait for Tucson Movie Column, The Sequel, coming soon to a Tucson Weekly near you.