If Blazing Saddles Didn’t Scare Off Tom’s True Love, (Hopefully) Nothing Will 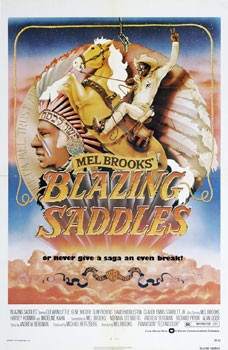 I'm writing this to tell you how much you mean to me. I saw that you turned 93 this year, so you've probably only got 15 years or so before you get to see your beloved Anna Maria Italiano (Anne Bancroft) again. Over the years, I had fallen into a lazy and predictable pattern of writing nice things about people after they had died. I want you to know how important you are to me while you're still here.

I've seen all of your movies multiple times, except for The Twelve Chairs. I'm sorry, but six chairs would have been enough, thank you very much. Through an odd set of circumstances, I saw (the original) The Producers as a relatively young teenager and I was overwhelmed by your audacity. When all my friends were walking around singing "I Heard It Through The Grapevine," I was humming "Springtime For Hitler."

Like a lot of guys, I can quote entire sections of your movies. My friends Pete and Stew and I go to midnight showings of your films and we talk along with every word. Heck, I once won the Arizona Press Club Award for a sports story I wrote based on quotes from your movies. You're already an EGOT (winner of an Emmy, Grammy, Oscar and Tony), so I don't need to share that award with you.

I was thinking about you last Saturday, which was an important anniversary of sorts for me. You played a big part in it. I met my future wife when we were both freshmen in college. The first words out of my mouth when I met her were, "Damn, you're good lookin'! I sure hope you're smart."

Befuddled, she asked why. I said, "Because I don't date dumb girls."

I'd walk her to class and call her at night. (She lived in town; I lived in the jock dorm on campus.) I helped her wash her car. I even gave her a personalized, hand-made greetings card. On the outside, I wrote, "If I had a nickel for every time I thought about you..." Inside, it said, "...I'd think about you a lot more often."

What girl is going to resist that?

I was busy with preseason basketball stuff and she had to go out of town for some school thing, but I finally got around to asking her out on a real date. She agreed to go out with me on Nov. 2. (In 1974, Nov. 2 was on a Saturday, just as it is this year.) In the small town in which she lived, night life and the social scene were limited. There was a movie theater that had showings at 7 and 9 in the evening and a Pizza Hut over on the other side of town and that was it.

Half the people who were going out on a Saturday night would catch the early show and then get a late supper at the Pizza Hut. The other half would go to Pizza Hut first and then catch the late show. We decided to go to the early show. (This is where you will come in shortly.)

I went to her house and met her parents. Her mom, who is whiter than the British Royal Family, took an instant dislike to me—one that, to her perverse credit, persists to this day. I had an Italian 'fro at the time, wild, curly black hair that never looked the same two days in a row. Her dad was the coolest guy ever. He was a giant of a man who worked 12-hour shifts at the copper smelter. Everybody in town respectfully referred to him as "Chief." He was a great athlete and a nice man.

Anyway, we got in the car to go to the movie. I drove around the corner, then stopped the car and said, "I'm going to kiss you before the night's over, so why don't we do it now?"

I know, what a brash-hole, right?

We get to the theater and what's playing? Only your comedy masterpiece, Blazing Saddles. I laughed myself side-achingly hoarse at the lines that you and Richard Pryor had written while she sat there like a statue. (She told me later that she thought that I might have been on drugs.) She was especially aghast at the racial humor. Before she met my basketball teammates, she had never spoken to an African American before.

The clincher was when you were introduced as The Honorable William J. LePetomane. In a packed theater of 400 people, I was the only one who laughed. Then she KNEW I was on drugs. I later told her that LePetomane was a French Vaudeville artist whose entire act consisted of controlled flatulence. (He could do the French national anthem with his butt.)

With a profound sadness in her eyes, she asked, "Why would anybody know that?"

I want to thank you for the part you played in that magical evening. I figured that if she would go out with me on a second date after that, she was mine! I've probably seen Blazing Saddles all the way through 50 times, while seeing it once was sufficient for her. We've been married for 41 years, so vive la difference.

I'll bet LePetomane could've said that with his butt, too.