Tom muses about the weather, voting by mail and the pathetic journey of Rudy Giuliani 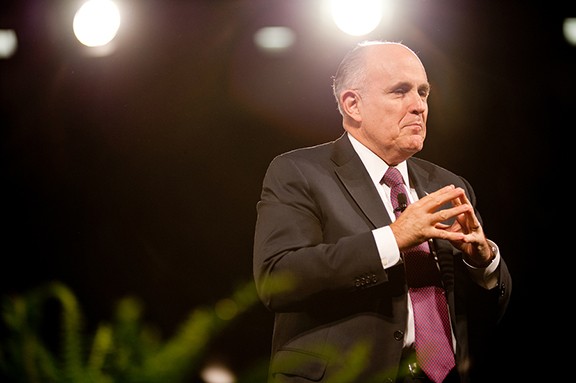 Bigstock
Rudy Giuliani
Now that the temperature is finally in the 70s, we Tucsonans are undergoing the Transition. All it takes is three consecutive days where the daytime highs are in the 70s and the nights are cool and crisp and we forget all about how hot and nasty the preceding six months were (although this past May was delightfully cool).

On the downside, I'm reminded of Albert Einstein's folksy attempts to explain one aspect of his General Theory of Relativity to the masses. He once said that if a man is kissing an attractive woman, 10 seconds will just fly by. But if the same man has his hand on a hot stove, 10 seconds will feel like an eternity.

With each passing year, it seems that the month of August, with nothing but the dog days of the baseball season and (ugh!) preseason NFL games, lasts about 10 weeks. Each day is 36 hours of oppressive, stick-to-your-skin heat with about four nighttime hours of sweat-through-the-bedsheets humidity.

But now that the weather is great, I look up and the college football season is more than half over, basketball has already started, and the Major League Baseball playoffs and World Series (which are sorta worth watching) have come and gone. Today is Halloween, tomorrow is Thanksgiving and Christmas is next week. And then we're into the New Year, careening toward the heat again. I love Einstein but his relativity bites.

For the first time in my life, I had to vote by mail. It was for a school district budget override and there was no other option. (Of course I voted in favor because I support public schools and I love hearing people whine—falsely—that we're overtaxed.)

I love to vote. I love standing in line to vote—the longer the line, the better. I don't even care if everybody else in line is wearing a MAGA hat, a Stars and Bars T-shirt and they're all listening to Ted Nugent sing about bow-hunting black people and Jews. Well, actually, I would mind that last part, although Donald Trump and Lindsey Graham would probably dance to it.

Going to the polling place has just always felt so American to me. Now, against my will, I've been reduced to a part of the Lazy-ocracy.

However, Australian elections are always held on Saturdays and there's something of a party atmosphere to the whole thing. Maybe we should make it mandatory to show your lazy ass up at the polling place (unless you're physically incapable of doing so).

I looked it up and it turns out that there are a bunch of countries where voting is mandatory, including Luxemburg, Peru, North Korea (that's hilarious), Argentina, and Singapore. Knowing Americans, however, we'll probably get to the point where, like on the classic TV series Max Headroom, people will just sit on their couch and vote through their televisions sets. No chance for voter fraud there, right?

Back when denis leary was stand-up comedian, he did this edgy bit where he wished that someone would invent a time machine so that he could go back in time and kill Elvis Presley right about the time that the King of Rock and Roll was going into the military. That way, we could all remember him as that dangerous guy with the greasy hair and the slippery hips, fearlessly singing black music with joy and a sneer. Instead, we also have to lug around memories of the guy who made one crappy movie after another, married his jailbait squeeze, and then finally became this bloated caricature of himself, doling out schmaltz in Vegas while wearing an embarrassing white jumpsuit.

I think about that every time I see sad, pathetic Rudy Giuliani stomping all over the grave of what was once his wonderful public image. His actions in the hours and days and weeks following 9/11—calm, steady and determined—were just what his city and his country needed. He was, indeed, America's Mayor.

He could have retired as mayor and then gone on to do good works. He could have started his own charity or a think tank or gone back into private legal practice and have lived out his life, universally recognized as one of the Good Ones, someone who rose to the occasion and absolutely nailed it. Instead, like the boxer who sticks around too long or the actor who vainly refuses to take on age-appropriate roles, Giuliani has besmirched his reputation beyond all recognition. And if even half the stuff they are saying about him is true—and he has admitted to about two-thirds of it!—he very likely could end up with a criminal record.

You can just tell that he's digging all the attention and the late-in-life reputation as a hell-raiser and a brawler, but a whole lot of people wish that he would have quit while he was way ahead.