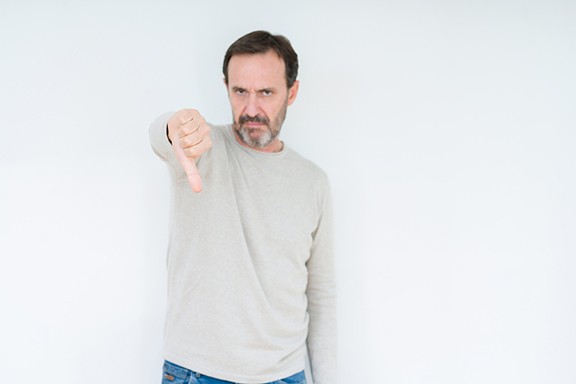 Bigstock
It's now officially autumn, which means that for the next five months or so, none of us will perspire unless we actually want to. The cool weather used to arrive around this time of year, but now it shows up around Halloween (if we're lucky). What's hilarious is that after a couple days of fall-like weather, we forget all about how nasty the summer was. So, with all the good times just ahead, I think I'll shed some negativity.

• What a shock to learn that traffic fatalities from red-light runners are at a 10-year high. And it's probably just a coincidence that this comes after many municipalities (including Tucson) were nagged into removing red-light cameras by selfish and bad drivers who wanted to be able to continue to drive badly and selfishly without worrying about getting caught.

I really wish that the municipalities had bought the equipment outright and run things themselves instead of going into business with the companies that had a profit motive. And I wasn't surprised when rear-end fender benders increased at intersections where the cameras were. That just meant that selfish/bad drivers were expecting the driver ahead of them to be selfish and bad so they both could run the red light.

But while the number of minor rear-end crashes rose, far more importantly, traffic fatalities fell by substantial amounts where there were cameras.

• Who among you was surprised when a high-ranking official from the Trump Administration's Anti-Education Department visited TUSD's University High and tried to turn it into a political statement by misidentifying UHS as a charter school? Some brain-dead guy from Washington, D.C. named Stump (rhymes with Trump and Lump and Take a Dump) was at UHS and made the dumbass mistake of referring to the place as a charter school. That can happen; no big deal. But, in true Trumpian form, when he was told by Arizona Daily Star reporter and TW alum Danyelle Khmara that UHS is actually a public school, he refused to acknowledge that he had been wrong. He said, "No, University High is a charter school."

No, you're a dumbass.

He'll probably get a raise, seeing as how he works for Betsy DeVos, whose last name, in some other language, means Devoid (as in, of intellectual capacity). How would you like to be known as the absolute dumbest member of the Trump administration?

What isn't surprising is that charter schools are still the sweethearts of the right-wing, we-hate-teachers-and-public-schools crowd. They check off several boxes in that agenda. They're a giant screw-you to public school teachers, who are known to vote the wrong way and who hold onto such un-American ideals as unionization. Carefully crafted (and, in some cases, poorly crafted) state laws allow charter school operators to exclude kids who don't fit their profile, including special-needs kids. And they served as a safe haven for those who railed against "government schools," but couldn't afford to send their kids to private school.

A friend of mine sends his kids to charter schools. The other day, he asked me whether, after 25 years of being openly critical of charter schools, I was finally ready to admit that they're a good thing.

There are certainly some that are better than the early fly-by-night criminal operations that drained the state treasury of hundreds of millions of dollars thanks to the absence of any governmental oversight. (Said oversight is still lacking to this day.) There are a few that turn out really good AP test takers. I couldn't come up with a third thing.

He said that, as with anything else, there would be a shake-out period. But this wasn't a battle between Betamax and VHS for market share. These were (are) human lives. We have an entire generation of people who were underserved by this state because of a shameful political agenda. We have no idea of how many thousands (or tens or hundreds of thousands) of our fellow Arizonans got worthless diplomas from crap charter schools over the last quarter-century. And besides, shakeouts don't always work, either. The Betamax was far superior to the VHS.

He countered by saying that charter schools went through a rough period but those that remain have emerged as great success stories. Yeah, success stories as to how rich people (and state legislators) can game the system and become even richer by feeding at the unsupervised public trough. And saying that it's OK that all those kids received substandard or non-existent educations so that a few mega-schools could emerge is like telling me that some scientific and medical advancements came out of Dr. Mengele's experiments. It's not worth it.

For the third straight week, the number of high-ranking Arizona Republicans who have come forward to censure State Party Chair Kelli Ward for saying that the husband of Gabrielle Giffords needs to be "stopped dead in his tracks" remains at zero.

Across the country, participation in high-school sports is down for the first time in 30 years. The biggest drop is in football, followed by girls' basketball. I blame video games and overprotective racist anti-vaxxers.

In the decade of the 1970s, an average of 5.1 people died in mass shootings IN THE ENTIRE COUNTRY per year. By the 1990s, that number was up to 21 per year, but it levelled off during the assault-weapon ban. This decade, it's 51.