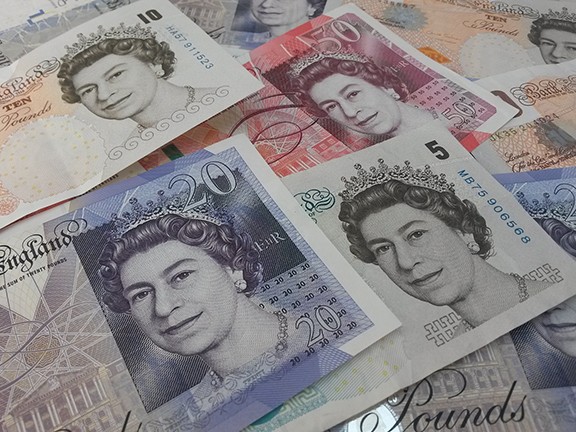 Bigstock
British Sterling Pound notes.
How about some good news for a change?

Currently, the British 50-pound note has a picture of a young Queen Elizabeth II on the front and pictures of James Watt and his business partner, Matthew Boulton, on the back. (You should actually google the note; Boulton and Watt look like the two most unhappy British people of all time, each one whiter and more constipated than the other.) Watt, of course, is famous for inventing the steam engine, which basically powered the entire industrial revolution and made Watt wildly wealthy.

Quick note: Steam-engine James Watt is not to be mistaken for dim-bulb James Watt, the land-raper who was in Ronald Reagan's cabinet. He's probably best known for his Fourth of July snafu. For years, the Beach Boys had performed at Independence Day events on the National Mall, where they had attracted huge, adoring crowds. But Watt thought that they had attracted "the wrong element," so, in 1983, he replaced the Beach Boys with (gulp!) Wayne Newton.

It turned out that both Ronald and Nancy Reagan were big fans of the Beach Boys. And virtually nobody is a big fan of Wayne Newton.

Anyway, back to the real (steam-engine) James Watt. He and Boulton have adorned the 50-pound note for a while, but in 2021, they will be replaced by Alan Turing.

From the first time I read about Enigma in The Ultra Secret back in the 1970s, I've been an Alan Turing fan. Then, as the years went by and we learned how the piss-ants in the British government kept him a secret, then ruined his life and then basically killed him, I've been waiting for him to get some kind of posthumous recognition. The movie The Imitation Game did a lot for his name and reputation and this will help, as well.

Think about it, though. Watt lived into his 80s and died a rich and famous man. Turing lived barely half that long and was badgered into a gruesome death by a callous and hypocritical government. You can argue that Watt's invention may have meant more in the history of mankind, but breaking that incredibly complex Nazi code and, in the process, playing a big part in the winning of World War II is not too shabby. Turing deserved so much better.

My adult children are world travelers (while I have been to Socorro, New Mexico). They are now planning on attending Wimbledon in 2021 so they can bring me home a Turing note (and maybe watch some tennis). The thing is that with Boris Johnson taking over as Prime Minister and driving Britain over the Brexit cliff, they'll probably be using those 50-pound notes as napkins at Wimbledon.

Your favorite president referred to Johnson as "the Britain Trump." All those fancy schools that Trump's daddy bought his son's way into and they couldn't find one that covered adjectives. Johnson is known for, among other stupid-ass things, saying that voting for his party "will cause your wife to have bigger breasts..."

• As someone who responded to last week's column reminded us, death is not always a sad thing, especially if it's the natural end to a life well-lived. I had to smile when I heard that NASA legend Chris Kraft died at age 95, a couple days after the 50th anniversary of the Apollo 11 moon landing. Born Christopher Columbus Kraft, he was NASA's first flight director. The Mission Control Center in Houston is named for him. He led a great life and made a cool exit.

• And for the last bit of good news, Burger King is selling tacos again. Before we get started here, please know that these things are to real tacos what a blonde woman on Fox News is to real reporting. But damn, they're edible!

You know how there's this movie coming out about how Bruce Springsteen speaks to disaffected youth through his music. Well, for me, it was Billy Joel singing:

While I have never drunk even one penny's worth of take-home pay, I have more than made up for it with the consumption of late-night drive-in food. Not just drive-in and certainly not just late at night.

Like Groucho Marx, I've never been much of a joiner, but I do admit to being part of a cult. I am one of the millions (billions?) of people who love Jack-in-the-Box tacos. They are the ultimate example of an acquired taste, but once you acquire it, it's not going away.

Legend has it that they arrive at the restaurant frozen with about 1,000 in a box. They have to be pried apart and then deep fried. After that, they are pried open for the insertion of .0004 of a cent's worth of lettuce and a squirt of taco sauce. The filling—affectionately known to cult members as gray-ish stuff—may or may not have meat in it, but nobody cares. It has the consistency of toothpaste with grains of sand added for adventure.

And now Burger King has gotten back in the sorta-taco game with their slightly more expensive but equally disturbing entry. Believe me, neither of these items is going to get even one vote in the Best of Tucson competition, but there's no denying it.