Tom remembers attending Newport ’69, when festivals were cheap, the music was great and the fans were too high 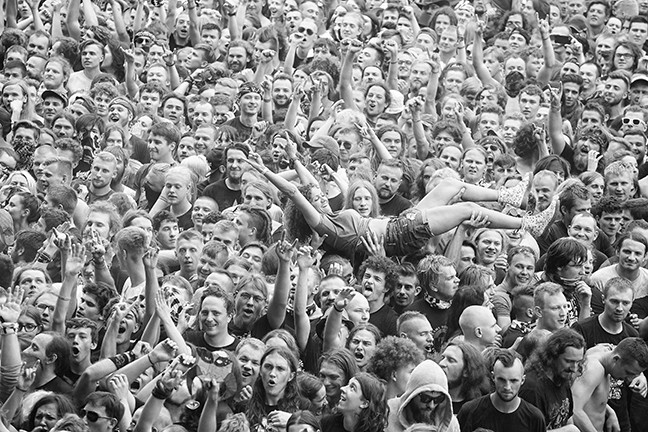 It was 50 years ago next week, Sixties music was still at its peak...

In the next couple months, we'll be bombarded with stories of how crazy/interesting the world was 50 years ago. In less than a one-month period (July 20-Aug. 18), man landed on the moon; the followers of Charles Manson slaughtered seven people over two nights; Hurricane Camille (the second-most powerful ever to hit the U.S. mainland) devastated the Gulf Coast; and, as Camille was hitting Louisiana, it was also the second day of Woodstock.

We'll probably hear from two million of the 400,000 people who were actually at Woodstock. What you probably won't hear are stories about Newport '69, the precursor to Woodstock that took place June 20, 21, and 22 in the San Fernando Valley. The three-day event took the music festival to heights never seen before, but, at the same time, it exposed the many pitfalls and potential ugliness inherent in bringing together tens of thousands of music fans in an enclosed space...along with just enough knuckleheads to ruin things for everybody. Some of the problems were addressed before Woodstock, but they all came roaring back at Altamont, a few months after that.

School had just gotten out (in L.A., the school calendar went from the autumnal equinox to the summer solstice) and it was time to go. They had been advertising the heck out of the Newport '69 and it seemed like an interesting idea, bringing together all different kinds of acts for a weekend of music. There had been something called the Newport Pop Festival the year before down in Orange County, but all I had ever heard about that was that Sonny and Cher had arrived by helicopter and had then been booed off the stage.

But this was at Devonshire Downs, only about 10 miles from where I lived. And the tickets were relatively cheap--$6 per day in advance, $7 at the gate, $15 for all three days in advance.

That's always been one of my biggest gripes over the past decades. Prices on housing and education have roared far ahead of inflation, but concert ticket prices have increased at warp speed. Adjusted for inflation, the $15 for all three days of Newport would be $106 today. Instead, the cheapest ticket for three days of Coachella is $429. A whole lot of people have gotten fat in the concert business.

My friend Bobby and I went on Friday night; he wanted to see Joe Cocker, I wanted to see Ike and Tina Turner. Jimi Hendrix was supposed to close the show on Friday, but Tina Turner's performance had left the crowd electrified. More than an hour passed before Hendrix took the stage. He was stoned off his ass and then proceeded to suck. He couldn't have completed a four-note blues riff if you had spotted him the da-DUH-da... The crowd began chanting "Bring back Tina Turner!" Hendrix's "set" lasted about 30 minutes and, as they say in The Commitments, it was shite.

Bobby and I didn't experience any of the problems that plagued the festival that first night (except for having to endure Hendrix). But apparently, there were thousands of gate-crashers who clashed with members of the Street Racers biker gang who had been hired to provide internal security. People kicked up a huge cloud of dust that hung over the venue and, unless you were up close to the stage, the sound system wasn't even close to being good enough to reach the estimated 50,000 people in attendance that night.

We went back the next day; it was an eclectic mix of acts, from Buffy Saint-Marie to Steppenwolf and Jethro Tull. Creedence Clearwater Revival closed on Saturday and they killed. But by then, there was an ugly vibe permeating the place. Too many stoners, too many drunks, too many cheap-ass gate crashers, broken glass everywhere. People actually fighting over the Port-a-Potties, of which there were not nearly enough.

I really wanted to go on Sunday. Scheduled to play were Booker T. and the MGs (Steve Cropper and Duck Dunn), Johnny Winter and Marvin Gaye (he actually missed his flight and the gig). Three Dog Night would close the show, but preceding them would be one of my favorite groups of the time, The Rascals. Being of Italian descent myself, I loved The Rascals' blue-eyed soul and the band members' names—Felix Cavalieri, Eddie Brigati, Dino Danelli...and Gene Cornish. (It must have been some early form of affirmative action.)

We decided not to go and that turned out to be wise. There were riots and vandalism, lots of damage and hundreds of arrests. L.A. bigwigs swore that they'd never allow anything else like that, EVER. Two months later, it was dwarfed by Woodstock and relegated to the historical dustbin.

A few years later, I went to a festival at the Ontario Motor Speedway outside of L.A. (This time, the buttholes stole cars and just abandoned them on I-10; dozens of them.) The headliners were Black Sabbath and Deep Purple. I went to see the three opening acts—Rare Earth ("I Just Want To Celebrate" and that 20-minute version of "Get Ready"); Earth, Wind and Fire; and The Eagles. I left around 3 and was back in L.A. before the stoners could get fully stoned. It was great.