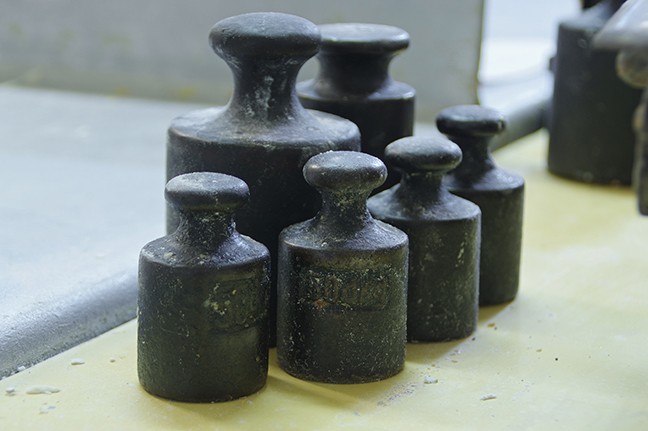 It is completely understandable if you didn't notice the monumental shift, seeing as how last Monday was the greatest May 20 in Tucson history (temperatures in the 60s, light breeze, a few sprinkles and freeze warnings in the high country). The weather was so magnificent that I wouldn't even have minded if the Dumb-Ass In Chief had tweeted something to the effect of "Hey, where's the global warming?"

Far more significant that day (for people all over the world) was that the scientific community redefined the kilogram (and other stuff). Since 1889, the kilogram has been defined as the mass of a cylinder of a platinum-iridium alloy, with its height the same as its circumference, that was vacuum-sealed and held in a vault in a suburb of Paris. Despite the painstaking efforts to protect the kilogram, the mass of metal has somehow lost about 50 micrograms (about the mass of an eyelash) in the past 130 years, meaning that what used to be a kilogram is now something less than a kilogram, but, by definition, still a kilogram.

As of May 20, however, the kilogram will now be defined by Planck's constant, which is 6.62607004 times (10 to the negative 34 power) meters-squared kilogram per second. No, really. Put as simply as possible, Planck's constant is the ratio of a photon's energy to its frequency. You can use algebra to solve for the kilogram.

However, that would require meters and seconds to be absolute constants, as well. Back when the French were trying to anoint themselves as the Keepers of All Things Science, they argued whether the meter would be defined as the length of a pendulum that had a half-period of one second or one ten-millionth of the distance from the North Pole to the equator on a line that went through Paris. Both plans had flaws, the pendulum one because gravity is not the same everywhere on Earth and the meridian one because the Earth is not a perfect sphere.

They went through several iterations until they came up with the current definitions, which is the meter is the length of the path traveled by light in a vacuum during a time interval of 1/299,792,458 of a second. Meanwhile, the second is defined as the duration of 9,192,631,770 periods (oscillations) of the radiation between two levels of the cesium atom (at absolute zero...which, of course, can't actually be reached).

If this doesn't get you at least a little bit hot and bothered about science, you're a little bit dead inside.

They're also redefining the mole (Avogadro's number), the candela (a measure of luminous intensity), kelvin (temperature) and, my personal favorite, the ampere, which used to be defined as being proportional to the mechanical force generated as a current flows through two wires. Of course, for it to be precise, the wires are supposed to go off into infinity, which, as we all know, can only be achieved by Buzz Lightyear.

I figured since these other things are going to be re-defined, I would add a few things to the list. For example:

• There's the DuceySecond, defined as the infinitesimally small amount of time for the Arizona Governor to cave in the face of public opposition. Last year, it was a whole bunch of people showing up in Phoenix. Since they were all wearing red, he naturally assumed that they were Communists. When informed that they were teachers, he asked, "What's the difference?"

He was about to go the prescribed route outlined in the Koch Brothers Playbook, but he sensed an opportunity and declared himself the Education Governor. The laughter has yet to die down, especially since the state has a billion-dollar surplus and he chose to stash it in the rainy-day fund rather than giving it to the schools that are still a decade down in funding.

And then last week, he was tossed a beachball-sized opportunity when he was informed that Arizona is a measles epidemic waiting to happen. He could have done the right thing by getting rid of the ridiculous personal exemption exercised by idiotic parents who need to stay off the internet. Or he could have told those parents that they can keep those exemptions and also keep their unvaccinated kids at home.

• There's the LazyMfExtraCouple Feet, the distance that people would have to travel to put the shopping cart away instead of leaving it in a parking space or up against somebody else's car.

As I get older, I try not to turn into Get Off My Lawn Old Guy, but I swear when I see people doing that, especially when the cart thing is a few feet away, I say something every time. "It's right freakin' there!" And I use the more Germanic pronunciation of "freakin'."

• An Anti-Candela is a wavelength of light that allows crappy drivers to avoid seeing "Yield" or "No U-Turn" signs.

• Finally, a PicoStone is defined as the amount of testicular capacity in the average male Trump supporter when attempting to form the thought, "I generally support him, but one of his decisions is just wrong." To be fair, this one is still theoretical, like the Higgs Boson was for so long. In two-and-a-half years of vulgarity, criminal conduct and rampant lying, there's no proof that a PicoStone exists anywhere in the United States.