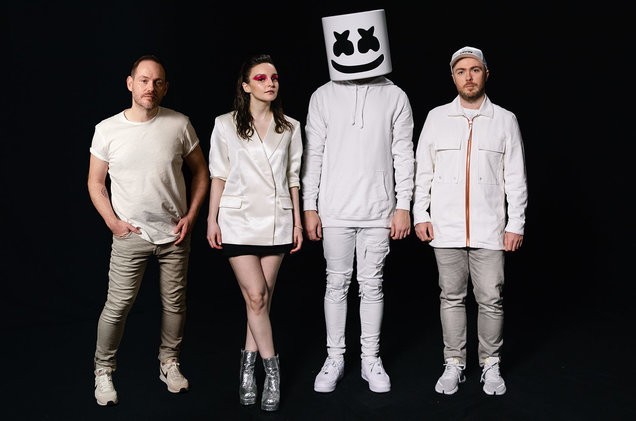 CHVRCHES released a song called "Here With Me," in collaboration with Marshmello. Sometime after that, Marshmello decided to work with Tyga, who was accused of sexual battery by a woman who appeared in one of his videos.

A couple weeks ago, the Scottish synth-pop band CHVRCHES played The Rialto here in town. A couple people I know went to the concert and they really enjoyed it. I had a chance to go, but if I'm going to see somebody from Scotland, it would be the Average White Band, which I truly believe is (was) the greatest funk/soul band of all time.

Anyway, CHVRCHES consists of musicians Iain Cook and Martin Doherty, along with vocalist Lauren Mayberry. They're young and hip and socially conscious. And now their lead singer is the target of death threats.

A while back, CHVRCHES released a song called "Here With Me," a collaboration with an EDM (Electronic Dance Music) artist named Marshmello. (He actually wears a marshmallow on his head when he's on stage. No judging on that; I remember Elton John and George Clinton.) Sometime after that, Marshmello decided to work with Tyga, who was accused of sexual battery by a woman who appeared in one of his videos. The two settled out of court, but then Tyga refused to pay the agreed-upon amount. More recently, Tyga was accused of sending inappropriate messages to a 14-year-old model.

Also on the song "Light It Up" with Marshmello and Tyga is Chris Brown, the serial abuser of women probably best known for beating the crap out of pop star Rihanna.

After learning of the "Light It Up" collaboration, Mayberry went on Instagram and, quite politely, wrote, "We are really upset, confused and disappointed by Marshmello's choice to work with Tyga and Chris Brown. We like and respect Mello as a person but working with people who are predators and abusers enables, excuses and ultimately tacitly endorses that behaviour. That is not something we can or will stand behind."

Fairly sedate, if you ask me. Gets the point across, using good grammar, syntax and punctuation. Very Great Britain.

At press time, Marshmello had yet to respond, but Tyga responded with "Where (sic) all God's children. Everyone makes mistakes no ones perfect. Let's Keep the energy positive."

Sort of a non-denial denial, but compared to everything else that was to come online, it reads like something drafted by Nelson Mandela and edited by Mother Teresa.

Chris Brown, who has never been made to pay for what he did to Rihanna (and others), came out with "BUNCH OF LOSERS. these are the type of people I wish walked in front of a speeding bus full of mental patients. Keep groveling over you (sic) own insecurities and hatred. IM BLACK AND PROUD. AND I KNOW IT HURTS THAT U GUYS ARE STRUGGLING WIT LIFE OR PEACE SO U ARE FORCED TO SEE MY SUCCESS. You aren't even #2 (REMEMBER 2nd place only means YOU LOST FIRST! TA-TA. GOODDAY PEASANTS."

And no, he never closed the parentheses.

I grew up in a violent time and place and I have always tried to adhere to the principles of non-violence, but doggone it, somebody needs to take that little punk out back and whup his whimpering ass. On a daily basis.

But first I'd like him to explain why the bus has to be full of mental patients. Why can't it be full of women you've beaten up? Or maybe full of people whom you paid to do your community service after you got convicted of assaulting Rihanna.

Also, Idiot, second place does NOT mean that you lost first. In almost all contests or tournaments, the second-place individual/team is the one that lost last.

However, even as vile and despicable as Brown showed himself to be, that's nothing compared to the poison that has spilled forth from his supporters. Hiding behind the anonymity of the Internet, they have unleashed a torrent of vulgarity aimed at Mayberry.

(Our beloved editor is going to have a good old time deciding which of this stuff will be allowed to pass.)

One "person" wrote "I hope tyga rapes you, then chris brown beats the shit out of you, then R Kelly comes and pisses on your white ass. Learn to keep Chris Browns name out out (sic) your gutter trailer trash ass mouth stupid racist white bitch"

Not really sure why R. Kelly's name gets capitalized while the other two get the e.e. cummings treatment.

Then there's "GO DIE IN A MF WHOLE. WHO TF DO YOU THINK YOU ARE STUPID WHITE TRASH. YOU AINT SHIT TO BE SPEAKING YO MIND SIT YA ASS DOWN LIL GIRL YOU AINT SHITTTTT DUMB BITCHHH.

And believe me, it goes on and on...and gets worse. The band (and especially Mayberry) have received death threats. But she's not backing down. At a show in Ft. Worth, Mayberry said, "CHVRCHES is a brand that people can buy into, and it has to be honest and it has to be authentic. And we would be really hypocritical if we worked with somebody and didn't say anything about what they did. We were like, maybe don't promote serial violence to kids and they were like, well, you know what we're going to do? We're going to rape you and shoot you."

That pretty much exposes Brown's fans for who and what they are. But maybe it's time to take down the wall of anonymity on the Internet and get some real soul-cleansing exposure going.