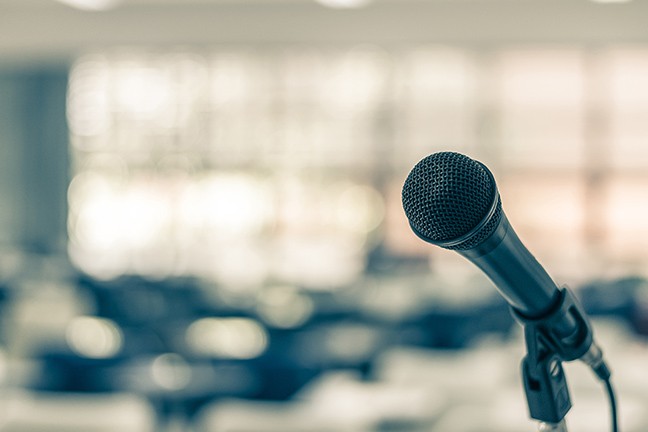 The irony hall of fame will probably soon be opening a new exhibit dedicated to the fact that the same President of the United States who wants to sic the federal government on Saturday Night Live just signed an executive order in favor of free speech on college campuses. While Mr. Trump probably has no understanding of the depth of his own hypocrisy (at least partly because that word has three-too-many syllables for his liking), these days any American coming out in favor of free speech is a good thing.

For most of my long life, attacks on free speech—along with blatant attempts at voter suppression—have been the sole province of those on the right. And while voter suppression efforts by the right have only intensified in recent years, there are now disturbing attacks on free speech coming from the left. While some of these efforts may be sincere in nature, they're still wrong-headed and not good for America. It's the easiest thing in the world to support speech with which you agree, but if you're the true American, you give your support to someone who is uttering words that will make you cringe. Labeling something as Hate Speech and trying to suppress it might make you feel good for a moment, but it's in the same way that peeing your pants might make you feel warm for a moment.

Ronald Reagan got a lot of mileage out of saying, "I didn't leave the Democratic Party; the Democratic Party left me." Yeah, that's lame. I've been a liberal Democrat my whole life and I realize that things are going to change. I've always known that there would be people out there on the edge inviting others to join them, perchance to get a different perspective on things. That's all well and good, but I draw a serious line at the person out there on the ledge who is telling me that if I don't join them out there, I have forfeited my ideological purity. My response to that is to tell somebody to perform an anatomically impossible act upon him/herself.

I've been a fan/supporter of Israel since I was a young teenager, breathlessly reading the accounts of the Six-Day War every morning in the Los Angeles Times. (For a thrilling read, pick up Six Days of War by Michael Oren.) Over the decades, I've supported Israel's badass-ery in its many forms. As an American, I really didn't mind that Israel stole the atomic bomb from us. I marveled at how, after being lulled into a false sense of security and then getting sucker punched during Yom Kippur in 1973, they put together a counterattack in about an hour-and-a-half and executed it to perfection. And I absolutely chortled at the brilliance of the Raid on the Sun that destroyed Saddam Hussein's attempt to construct a nuclear device.

But nowadays, support for Israel has turned into "You can't criticize Israel." I'm sorry, but that's crap. The once-lovable underdog has become the Bully on the Block. Netanyahu is a crook and something of a tyrant. And the ridiculously provocative policy of building settlements on the West Bank is completely counterproductive to any hope of ever finding a lasting peace.

Here's one for you: I believe that a Palestinian kid has the same right to life, liberty and happiness as does an Israeli kid. If you find that to be anti-Semitic, then you can bite me.

Then there's the case of openly gay tennis legend, Martina Navratilova, who got kicked off the board of an LGBTQ group for daring to ask questions about fairness in sports. In a headlong rush toward completely unnecessary political correctness, 17 states are now allowing high-school athletes to compete with the gender with which they identify. Last month in Connecticut, two transgender athletes (neither of whom has received any form of medical intervention) finished 1-2 in the State indoor track finals, demolishing the competition.

It's not right. The amount of testosterone in a post-pubescent boy gives him a 10-20 percent advantage over a biologically female competitor. An elite 14-year-old male athlete will post running times roughly equal to those of the top Olympic-level women in the world. Imagine what he will do when the competition is a 14-year-old girl.

For voicing similar concerns, Navratilova (a pioneer who came out when it was potentially dangerous to one's career for doing so) was excoriated by people in the LGBTQ community.

I've spent my life in sports—as an athlete, a coach and a fan—because I believe that, every now and then, the confluence of sportsmanship and fair play leads to something magical. I sincerely hope that these trans athletes get to live the lives they want as the gender with which they identify. But until that happens, they have to realize that fairness is more important than feelings—or even identity.

Navratilova has said, "All I am trying to do is make sure girls and women who were born female are competing on as level a playing field as possible within their sport."

Her support of trans rights does not preclude her from identifying what she calls "unique difficulties" in this matter. As for me, I find it puzzling that people who probably want nothing more than to be treated fairly would do something so inherently unfair.