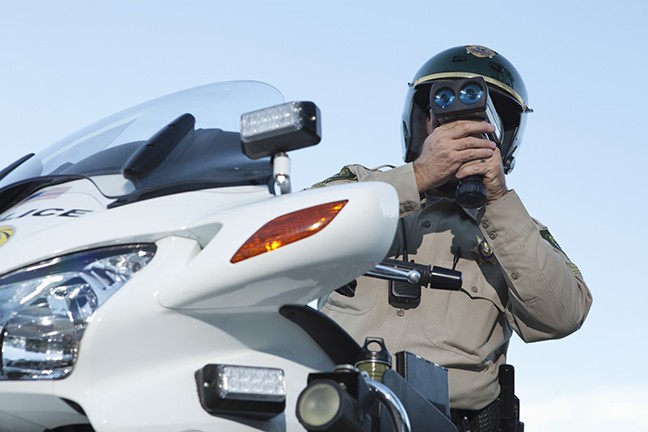 Well, tomorrow is Sept. 28. For most of us, that simply means that we’re careening toward October, which, before climate change, used to be the greatest month of the year in Tucson.

But for the fine members of the law enforcement community who bust traffic violators, it means that it's time to start fulfilling your quotas.

I know, I know, you don't have quotas. That's just a myth that has stuck around for the past century because there's no truth to it at all. We know (wink, wink) quotas don't exist because that would be bad. Traffic tickets are given out in equal numbers throughout the month. But, just for fun, let's pretend they do.

A friend told me not to write about this, as it amounts to poking the bear. And tempting fate. And pissing off police. But I'm not superstitious nor am I afraid. You see, I've been driving nearly 50 years and I have never been pulled over and given a ticket. Heck, I've never received a warning. I mentioned that once when I was on the radio and a Pima County Sheriff's deputy called in and asked to what do I attribute that incredible good luck.

I said, "Well, first of all, I'm white." He got really upset. But let's be honest. I'm driving along in my Honda Civic, at or near the speed limit, and the cop looks in my car and sees this old, fat white man who looks like every single person at a Trump rally, including the women. No way he's coming after me. Also working in my favor is that I don't drink, smoke or use drugs; I have never spoken on the phone while driving; and, as mentioned, I at least stay within the vicinity of those two-digit numbers on the roadside signs.

As we near the end of the month, I'm here to offer some easy pickins, perchance to get those numbers up and maybe cut into the growing tide of really bad (and distracted) drivers who apparently can't read and don't know/don't care about the law. Here are four places you law-enforcement types should go:

• Auto Mall Drive. Holy crap, this place is dangerous! As Eric Burdon once said, I was out strolling one very hot summer's day. I was walking from Planet Fitness after a workout (go ahead and laugh) heading to AutoNation to pick up my car. As I walked along Auto Mall Drive, I had to have seen at least 10 cars going 45 mph or faster. It's like a speedway. I know that people can sometimes be in a hurry to get to Chick-fil-A, with its tasty chicken pieces and a healthy side of Southern-fried Christianity, but this is ridiculous.

• River and La Cholla. There are very-visible signs in all four directions that say "No U-Turn." I would say at least half of the times I go through that intersection, at least one person makes a U-turn. I once parked in the Circle K lot and counted 27 U-turns in less than 15 minutes, including two who made wide U-turns and cut off Sheriff vehicles that were making green-arrow right turns from the other directions. One deputy I know told me that he and others don't believe there should be "No U-turn" signs at that intersection, so they don't enforce it. Law enforcement people who decide which laws they will enforce is probably a good topic for another time. But allowing people to break the law only emboldens them to commit other, more-serious violations.

• You're driving into the airport in the proper, second-from-the-right lane. As you near the end of Tucson Boulevard, approaching the right turn that will take you to the parking and departure areas, it's absolutely guaranteed there will be an oblivious driver in the curb lane who will ignore the sign saying his lane ends and he must turn into the hotel. When he realizes there is no lane for him, he gets all butt-hurt because he thinks you've cut him off.

I want a cop to spend a day there and give tickets to every one of the 8,000 or so morons who don't pay attention and endanger lives, THEN go find the Arizona State grad who designed that monstrosity.

• Finally, we know that excessive force is sometimes a thing, and we're all against it. However, I recommend we make an exception. I want every decent, law-abiding driver to go through the intersection of La Cañada and Moore just once, and they will agree with me that a whole lot of people who live in that area need to be pulled over and slapped.

A four-way stop is not that difficult. You wait in line, then you finally reach the stop sign, at which time you STOP, then proceed through the intersection, one car at a time. Unless you're a rich, white lady who drives a Lexus or some jerkweed in a big pick-up truck, in which case you don't need to stop and you can race through the intersection two or three cars at a time. I swear, one of these days, there's going to be gunfire at that intersection.

So, go fill those quotas! Personally, I think I'll just stay home this weekend. No reason.