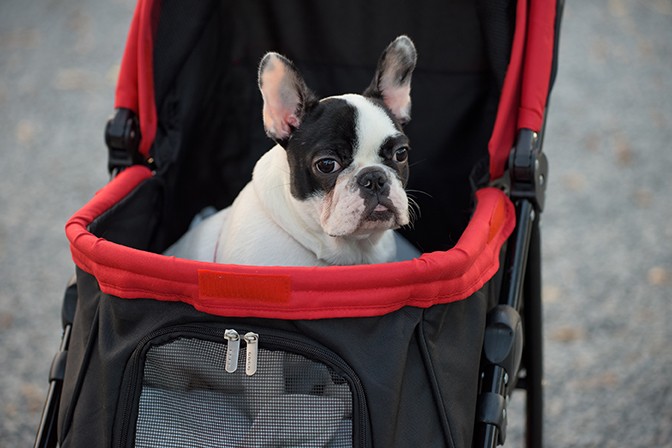 BigStock
No, your dog is not your baby.

Time to send off a bit of correspondence:

What did I ever do to you? Why are you actively chasing me away?

I'll admit that on those rare occasions when I have the remote control, I tend to channel surf the 10 p.m. news, especially when the lead story is something like a firefighter who found a three-legged turtle hanging around the station. I'm sorry; I prefer real news. But when my way-better half has the remote, she puts it on one channel and then just leaves it there.

This summer, for some unknown reason, my wife gravitated to Channel 9. Maybe it was all those precious shots of Guy Atchley's grandson. (That's sarcasm.)

Even though it was summertime (when the livin' is easy and the sports are boring as all hell), I still wanted to get some scores. After Erica Weston left for a job in St. Louis, Jason Barr had to handle the sports stuff all by himself. That couldn't have been fun, but it was still only summertime.

So, one night, the news is on. I glance over at the clock. It's 10:28 and the sports segment still hasn't come on. They come back from the commercial break and sign off. Really?! I shrugged it off. But then it happened again. And again. One night, instead of showing the sports, we were treated to weather announcer Erin Christiansen, in a dress, doing push-ups on the studio floor.

Yeah, Erin said it would...be freakin' weird! It was impressive, but all I wanted was the Diamondbacks score.

So, your Orwellian stunt of a local newscast without sports has effectively run us off. Let me know if you ever come back to being American.

Somebody sent me one of your posts the other day on which you identified yourself as a "pet parent." Stop it right now! You have a college degree, for crying out loud. It might be in psychology or something else useless, but it's from an actual university, not from a charter school or something. You cannot be an animal's parent; the Island of Dr. Moreau is a fictional place.

Plus, you're married. You know that activity in which you and your spouse sometimes engage? That's how you can become a parent. Now, if y'all don't want to have actual children, that's your choice. But you can't go to the animal shelter and then suddenly claim that you're a parent. All that does is add to the overall dumbass-ery of our country, which is currently in serious intellectual decline, starting at the top.

I understand if you don't want to say that you "own" your pet. If you want to refer to it as your animal companion, that's cool. But it ain't your damn kid.

And, unfortunately, it's not just you. I was at the store the other day, and I saw a car with a bumper sticker that read "Ask Me About My Grand-dogs." No, I should ask you about your medication.

P.S. While doing a little research for this column, I saw the bio for Lisa Villegas, the woman who does the weather for Channel 13. To her credit, she has never done push-ups on the air, although she probably could. And the other night, on a live remote, she said two complete sentences in a row without reading stuff off her phone. (That's actually relatively impressive in this day and age of local TV news.)

Alas, on her bio, it says "(Lisa) is also proud mom to Biscuit, her beloved Chihuahua..." No, she's not.

What the hell, Dude? I remember when you first started in politics. You used to be on Emil Franzi's radio show all the time. You were wrong about a lot of stuff, but I just attributed that to your having inhaled too much jet-fuel fumes. But you seemed decent and relatively open-minded. While in the military, you took some brave stances and actions that advanced the cause of women.

We all know how politics works. You're in a tough primary, and you feel the need to outflank on the right your two opponents—Kelli (Psycho) Ward and former Maricopa County Sheriff Joe Just Plain Psycho. But you could do that without cozying up to a cretin who is openly hostile to women and minorities.

I used to think it was dumb for Arizona to hold its primary elections so close to the general. This time, I'm going to enjoy watching you try to pivot back toward the center in an effort to win the independents.

You know what? You can be all in on the wall and stronger borders and more deportations, but you don't have to mimic the words and actions of an openly sexist pig. Shame on you. And if I ever have the occasion to see you again face-to-face, those will be the first three words out of my mouth.