The 10 dumbest things Tom heard after the Florida school shooting 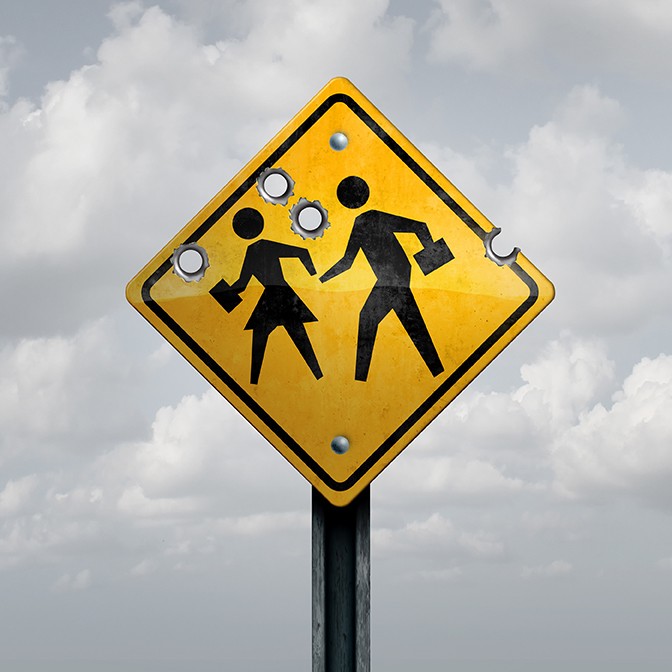 Here are the 10 stupidest things I heard in the aftermath of the Worst School Shooting of the Year…of the week. And I'm leaving out most of the generic nonsense that always pops up during times like this—people misquoting the Second Amendment, equating cars and guns (but failing to mention that drivers need to be licensed), and the outpouring of false sympathy. All you fake-ass political "leaders" can take your fake-ass thoughts and prayers and shove them up your fake-ass...you know.

As I have said before, I am basically addicted to crackpot right-wing talk radio; it's just so fascinating. And I've gotta tell you, they were on fire after the Florida massacre. Actually, not so much Sean Hannity, who has his nose so far up Donald Trump's butt—trying to provide cover on the Russia thing and the dysfunctional White House—that he probably didn't even know there had been yet another mass shooting.

Seeing as how it's Lent, and I'm all holy and stuff, I want to make a confession. As I have said in the past, I have gone my entire life without ever having struck another human being in anger (weird, but true). But I swear I want to punch Sean Hannity square in his fat, smug face. (I'll now pause to say five Hail Marys.)

10. Some woman who called into Rush Limbaugh blamed the shooting(s) on "modern feminism" (as opposed to ancient feminism?). She certainly has a point, seeing as how virtually all of the school shooters are transgender lesbians who take oral contraceptives and insist on equal pay for equal work. Dumb-Ass.

9. Also on Limbaugh, some guy peeked out from his bunker long enough to claim that bump stocks—the invention that makes slaughtering innocent people faster and more efficient—protects him from the federal government.

7. One caller wondered aloud as to why there weren't any school shootings at private and/or religious schools. For the briefest of moments, I considered that to be an interesting question. But then he kept talking and blamed the shootings on the failure of the public-school system and the fact that all public-school teachers are teaching socialism in their classrooms. (Yeah, I remember when I took socialist math. And that socialist physics class was the worst!) If only that guy could have kept his mouth shut, he wouldn't have exposed himself as an Industrial-Strength Dumb-Ass.

6. Some guy on local TV news trotted out the most-tired cliché of them all, that shootings have absolutely nothing to do with guns. That's like saying that alcoholism has nothing to do with alcohol. It's all in the chromosomes. Local Dumb-Ass.

5. Rush Limbaugh said that the kids who are speaking out (you know, the ones who, just days before, crouched in a classroom and watched their best friends bleed to death in front of them) are merely stooges of the Mainstream Media and that their words and actions "are straight out of the Liberal Playbook." Have you no decency, sir? Can you just once take your foot off the gas and look up to see exactly where it is that you're leading your mindless horde?

4. Limbaugh then went off on this weird tangent about how young people shouldn't be protesting because their brains aren't fully developed. Like his buddy, the Draft-Dodger-In-Chief, Limbaugh was able to avoid being drafted, but he has to remember that it was young people marching in the streets (along with the Mainstream Media) who helped nudge the United States away from its disastrous Vietnam policy (not to mention toward advances in civil rights and protection of the environment).

All I can say is God bless those kids. I hope they are able to maintain their fire and their focus and not get beaten down by a corrupt system populated by gutless, selfish adults. This does feel different; I hope it succeeds.

3. Donald Trump blamed the shooting on the FBI.

He was addressing a gathering of CPAC, which, I believe, stands for Crackhead People Against Civilization. At first, he echoed Trump's stupid line of thinking, then he went Full Frontal Shameless by callously stealing from the speech given by one of the survivors of the school shooting. Topping things off was NRA spokesmodel Dana Loesch, who claimed that the media love school shootings because they get to show "crying white mothers." Real classy.

1. People ranging from the local morning drive-time right-winger all the way up to his fantasy soulmate (Trump himself) called for teachers to be armed. This is the stupidest thing ever said out loud in the history of the United States. For starters, the only thing more dangerous that students being shot at in a school is students being caught in a crossfire in a school.

Secondly, what good is a pistol going to do against somebody armed with a weapon of war designed to kill lots of human beings in a very short span of time? This ain't the movies; a teacher isn't going to burst out of the classroom, slide along the hall floor and get off the perfect kill shot. That's a dumb-ass gun nut's wet dream.