Tom Remains baffled by How donald trump keeps getting away with it—and he’s not a fan of emotional-support peacocks, either 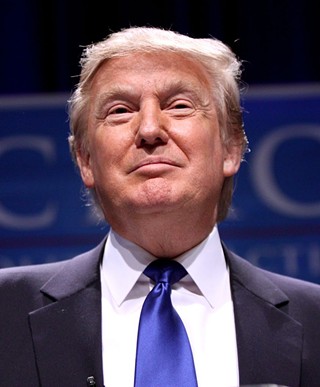 Have you ever been watching something on the news and your mind just starts spiraling? Actually, I guess the first question should be, do you ever watch the news? I'm not talking about the stilted phony crap on Fox or MSNBC's equally-stilted rebuttal of the phony crap on Fox. I mean, like, news.

Anyway, you're watching the news and something comes on, we'll say a story about some really rich guy who is accused of a horrible crime. Unfortunately, in this day and age, fatalism creeps in and you shrug and say to yourself, "He's going to get away with it. Rich people always do."

But then there's that little glimmer of hope that shows that you haven't totally given up yet.

You start thinking that maybe it'll turn out this way or, even better, maybe it should turn out THAT way.

I was watching that and I thought: "He's going to get away with this. All the hypocrites in his Evangelical base will convince themselves that a 60-something guy who was screwing around on his third wife is suddenly going to find Jesus when he turns 70. Yeah, right. And poor Melania is going to stay married to that bum." (I actually do feel sorry for her. She always looks so sad, although it might just be the Botox.)

That's almost certainly what's going to happen; part of it is already happening.

But then I thought: "Wouldn't it be great if Melania thought that enough was enough and she went out and got the greatest lawyer(s) in the world and they figured out a way to break the pre-nup and she took his entire $50 million fortune?" (You don't really believe him when he claims to be a billionaire, do you?)

All of a sudden, my mind-spiral went logarithmic.

(For your edification, the cross-section of a Nautilus shell is a logarithmic spiral.)

You know what would be really great? To get back at the Pig-In-Chief, Melania should have an affair herself—preferably with a black guy who has a Hispanic last name and who is in the country illegally.

Did you ever see the story

of the woman who tried to take a giant peacock on a passenger flight, claiming that it was a support animal? She and all the other selfish-ass people who continue to trample the boundaries of decency and decorum by taking animals where they don't belong and are, in the process, ruining it for the handful of people who are in genuine need of a service animal need to be slapped, repeatedly.

Thankfully, the airlines are finally starting to crack down on the jerks. It may be that the airlines—which are nobody's favorite enterprise—are doing so because they're losing out on revenue as pet owners try to avoid the cost of having their animals shipped in the cargo bay.

The problem is that there are conflicting federal regulations. The Americans With Disabilities Act defines a service animal as a dog or a miniature horse. (At least they had the common sense to exclude cats.)

Unfortunately, something called the Airline Carrier Access Act of 1986 doesn't specify what qualifies as an "Emotional Support Animal." Recently, a woman flew from Seattle to Salt Lake City, accompanied by her pet turkey.

When asked why she did so, she claimed that the meal-in-waiting "reminds [her] on a daily basis that there is a reason to smile and to care, no matter how bad things are."

Dude, if you've taken that many drugs, you could probably fly to Salt Lake City on your own.

I really don't care why the airlines are doing it; these people have to be stopped. (Even the New York Times editorialized against the practice last week.)

It's getting way out of hand. Not that long ago, I'd see it once or twice a year. Now I see it two or three times a month.

You people know who you are. You strut into a grocery store with your stupid-ass dog, knowing that the animal has no business being in a place where people buy food.

All the other people will stare darts at you but will be too afraid to say anything. And you'll get away with it.

However, in my scenario, some other selfish clod will bring their stupid-ass dog to the store and the two dogs will get in a stupid-ass fight, scratching and clawing and peeing all over the floor.

Then, from around the corner, comes a personal injury lawyer, who slips in the urine and wrenches his back.

He screams that he's going to take you for half of your worth.

And then your stupid-ass dog bites him.