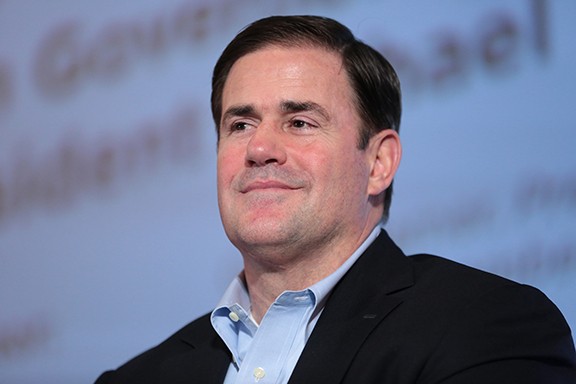 It is not fair or proper in life to stereotype people. I know that I have been guilty of it in the past, but I'm going to try to get better.

I found that out just the other day when Arizona Governor Doug Ducey declared himself "the Education Governor." I swear, were it not for the cast-iron bladder that I have built up over the decades riding on sports-team buses, I would have peed myself from laughing. As it is, I got a stitch in my side and squeaky, alien noises came out of my throat.

Y'all remember that when he first ran for Governor, Ducey campaigned on the tried-and-true promises to give rich people more money because God likes rich people and they deserve more money, and to never raise taxes because people will just want that revenue spent on stupid stuff like schools and roads and health care. Then, when he became governor, he found out that some of his Republican buddies in the Legislature had broken the law for several years by stiffing the public schools, so in order to keep them from having to wear some of Sheriff Joe's pink panties, Ducey and his friends cooked up a scheme to steal money from future generations to pay, pennies on the dollar, to try to shut up the present generation.

Then he sided with the shady characters who run the charter schools for their own profit. Then he supported the welfare-for-the-wealthy school voucher plan. Then he almost broke his damn arm patting himself on the back for giving the state's teachers (who are leaving the state and/or the profession in droves) a fraction-of-1-percent raise. And, most recently, with the Legislature still owing the schools billions of dollars, he said that he would heroically find $100 million for schools.

Doug Ducey is the Education Governor like Donald Trump is the Stable Genius President.

Could somebody please tell Mr. Trump that geniuses are extremely rare and that true geniuses almost never refer to themselves as such. Isaac Newton was a genius. Srinivasa Ramanujan was a genius. In present-day terms, Stevie Wonder is a genius. Kanye West refers to himself as a genius. That should clarify that.

Pardon me while my ADHD kicks in. When Isaac Newton was young, he would pry open his eyelid and then press against the side of his eyeball with a needle to see what it would do to his vision. After his famous feats (the invention of calculus and his laws of motion), he served for a time as the Warden of the Mint. Counterfeiting of coins had become such a problem in England that it was threatening to ruin the entire economy.

Small-timers would just take tin-snips and cut off a little bit from each coin and use the precious metal for other purposes. Big–timers, like the infamous William Chaloner, would use cheaper metals to make almost-perfect copies of the Coin of the Realm. Newton pursued Chaloner for years. Chaloner was finally convicted and hanged, the economy was saved, and Newton went back to being the head of the Royal Society. Cool story.

Oh yeah, if Doug Ducey is the Education Governor, that means that Regina Romero is the Safety Councilperson. Did you happen to hear the stupid-ass thing she said last week?

(I have to be careful here. The last time I criticized her for something she had said, her husband contacted me and was none too happy, seeing as how English is her second language. I told him that I had played baseball in Mexico for a time and the entire time I was there, all I ever learned how to say was "Please pass the salsa" and "Where's the bathroom." In that order. As it turned out, that's pretty much all I needed to know.)

I won't quote her; I'll just say that she doesn't want it to be a primary offense to text while driving in Tucson because the police might use it for racial profiling. GTFOH!

To begin with, just think how many lives would have been saved if craven politicians would have made it illegal to use a phone for any reason while driving from the very jump. This law is 20 years too late, but it's a good law.

As for racial profiling, I drive around a lot and the three most likely people I see misusing a phone while driving fall into the categories of:

• Young white woman in a big SUV or Lexus-level vehicle;

• Fortysomething white guy in a pickup truck with some kind of tools in the back and;

Y'all have my permission to profile them.