Remembering ’68: Race riots, political chaos, Vietnam and the assassinations of MLK and RFK 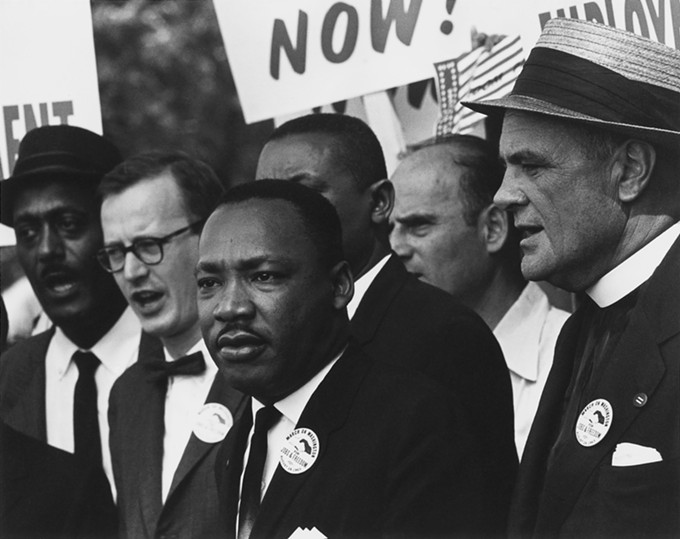 Courtesy
They took your life. They could not take your pride.

Those of us who lived through 1968 and are fortunate enough to still be around will attest to the fact that it was the most horrible of years.

It was a year filled with death and destruction, dominated by a faraway war that hit home on our TV screens on a daily basis. There were political assassinations and there were riots based on race and riots fueled by rage. And then came some really bad election results. A lot has happened in the 50 years since 1968, but when you get down to it, not nearly enough has happened.

People today will say that 2017 was a tumultuous year, but it really wasn't. It was the old sound and fury thing, signifying nothing. Seriously, 50 years from now, what will historians say about 2017? The worst president in the history of the country appointed a liberty-hating cracker to the Supreme Court and then Republicans passed a tax cut for rich people. Not exactly earth-shaking news.

Think about this: The first big news story of 1968 involved North Korea. The U.S.S. Pueblo was a spy ship off the coast of North Korea. It was doing what spy ships had done since the cessation of open warfare on the Korean Peninsula 15 years earlier—it was spying. However, the United States has always contended that the ship was in international waters. The North Koreans disagreed and opened fire on the ship, killing an American seaman. They boarded the ship and took it and its crew to North Korea.

For a brief time, it looked like the shooting was going to start back up in those parts, but then it settled into an ugly diplomatic standoff. There's a famous photograph taken of the crew by their captors. One of the crewmen down front is giving the finger with both hands. He later got beaten for it, but it damn sure made young me proud to be an American. The crew was released later that year, but the North Koreans kept the ship. They were probably trying to figure out how the Americans had managed to get electricity to work out in the open sea.

Right after that came the Tet Offensive, which shocked Americans and pretty much ended the presidency of Lyndon Johnson. LBJ's presidency, which began not long after the assassination of John F. Kennedy with the somber words before Congress, "All I have I would have given gladly not to be standing here today..." He used all of his political skills to push through the Civil Rights Bill and then the Voting Rights Act, the two most important pieces of legislation of the 20th century. He then embarked on his sweeping (if, in retrospect, misguided) War on Poverty.

He was rolling and then he bet wrong on Vietnam. The images coming through on the nightly news of fighting the streets of Saigon were shocking. The average American thought that the fighting was all up north and that it would be over soon. What we then saw was the equivalent of Nazis running through the streets of London, heading toward No. 10 Downing Street. As a military action, the Tet Offensive was actually a failure, but it flipped a switch on in America and history turned.

There aren't enough words in this computer to describe the impact of the assassinations of Martin Luther King and then, just two months later, Bobby Kennedy. Their deaths were painful and personal and they forever made America an uglier and less-hopeful place.

There were riots all over America after King was killed. Two notable exceptions were Indianapolis, which saw Presidential candidate Bobby Kennedy walk through the streets of the black area of that city, speaking from the heart to huge throngs of African-Americans who had spilled into the streets. The other was Boston, which benefited from the presence of the Godfather of Soul. I've mentioned it in this publication before, but do yourself a favor and Google "The Night James Brown Saved Boston."

Riots of various types (race, anti-war, political) continued on through the summer and culminated with the "Whole World Is Watching" riots outside the Democratic National Convention in Chicago. With front-runner Bobby Kennedy dead, the Dems had to choose between Vice-President Hubert Humphrey, an eminently decent man who was saddled with the failed Vietnam policy of his boss, and Eugene McCarthy, another decent man who had the political charisma of dry toast.

Richard Nixon was elected President and we all know how well that turned out. He benefited from the fact that openly racist George Wallace won the electoral votes from five Southern states in a third-party bid. When Lyndon Johnson signed the Civil Rights Act, he told people that civil rights legislation would turn the South Republican. He got that one right.

The year ended on an oddly hopeful note as Apollo 8, with Commander (and Tucson High grad) Frank Borman reading from the Bible on Christmas Eve as the capsule orbited the Moon.

We survived 1968, but it still ripples through our lives. Let's try not to merely survive 2018. Let's grab hold of it and bend it to our collective America will. Let's move past the nonsense of "Make America Great Again." America, even at its most imperfect, has always been great.