In today's society, the Word Police may do more harm than good

It's only words, and words are all I have...

To those of us who earn a living (and/or write a column) using words, it is amazing how maddeningly inconsistent people are in their use of words and the shifting meanings thereof. People are like galvanometers, their needles flipping wildly between extreme positions on the dial and never pausing in the middle. Even that once-significant blowhard Rush Limbaugh will say, "Words mean things," and then turn around and call some public figure a word that is not only false, but obviously and intentionally false.

As America was taking a nice, big step forward last week, there were a few stories that popped up that show we've got miles to go before we sleep. And if our collective head ever does hit the pillow, it may even then be a troubled and conflicted sleep.

In today's society, potentially hurtful words are often bandied about, either spoken by insensitive people, heard by overly sensitive people, or both. Or maybe neither. It often boils down to who is speaking; when Richard Pryor said "nigger," it was always funny. When Carlos Mencia says it, it's wince-inducing. And when Michael Richards blurts it out, it's ass-whuppin' time.

The UA student newspaper, the Arizona Daily Wildcat, found itself in a mess last week when it ran a syndicated cartoon in which a person responded to a question about his voting preference with, "I'm voting for the nigger." It was especially unfortunate because the cartoon ran after Barack Obama had been elected. Wildcat editor Lauren LePage explained that it was an editorial mix-up, took the blame for it and apologized.

That wasn't enough, as meetings were held; resignations were demanded; and advertiser boycotts were discussed. The reaction fell just short of honkies being hanged in effigy. What made it even more interesting is that the comic strip is done by a black cartoonist, and it recounted an event that actually happened to a pre-election pollster.

To be sure, it's an ugly, ugly word, but I'll bet that just about every American--except Mark Fuhrman--has said it at least once. I know that over the years, I've probably told 100 people about that scene involving the sheriff and the little old lady in Blazing Saddles.

The line, according to head writer Mel Brooks, was written by Richard Pryor, who is my favorite entertainer of all-time. Pryor used that word all the time in his act. It was only after he almost burned himself to death in a cocaine freebasing mishap that he vowed never to use it again. I took him at his word that he had an epiphany, but then again, it wasn't strong enough for him to ask that his old albums (including his best-seller That Nigger's Crazy) be taken off the shelves.

Later in the week, a genius on the University of Texas football team posted this on his Facebook page: "all the hunters gather up, we have a nigger in the whitehouse (sic)." You have to just love the Darwinian nature of Facebook and how it helps weed out the incredibly stupid from the just merely stupid.

Also last week, the Internet was abuzz because the phrase, "That's so gay," was used on The Simpsons, a show that pretty much skewers all societal conventions, but is generally left-leaning.

While "nigger" is negative 99.9999 percent of the time (don't ask me for the exception, but I'll bet Charles Barkley could think of one), "gay" is different. From the time the word was appropriated and given a new meaning, that meaning has been positive or, at the very least, neutral. At the same time, it can be used in a derogatory sense, meaning everything from lame to less than manly (whatever the hell that is).

The use of "gay" is widespread and has all different sentiments. The music magazine Blender (which casts itself as a younger, hipper Rolling Stone) has a regular feature called "The CD We're Totally Gay For." I've often said that I'm gay for Hugh Grant. (Seriously, what real man isn't?) And who among us has heard a Coldplay song and not thought of the phrase, "Do you know how I know you're gay?"

All I can hope for here is that we, as a society, keep progressing and evolving, and that those who get all butt-hurt over words that were innocently uttered disappear in equal numbers to those who intentionally misuse words in lieu of any cogent thought or arguments, just to inflict pain.

In the essay "Politics and the English Language," George Orwell wrote: "One ought to recognize that the present political chaos is connected with the decay of language. ... The word 'fascism' has now no meaning except insofar as it signifies 'something not desirable.'"

I thought of that over the past few weeks whenever the talk-radio knuckleheads dishonestly tried to cram the word "socialism" into every sentence in which Barack Obama's name was mentioned.

I agree that the use of precise language is vital to the advancement of political discourse. But when it comes to social interactions, I'm not so sure that the Word Police don't do more harm than good. Whining and complaining every time somebody says something that might possibly hurt somebody's feelings, well, that's just so ... oh, I don't know, fascist, I guess. 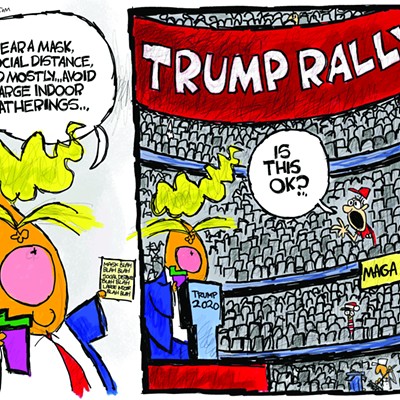