Tom gets hot and heavy with local firefighters

A couple weeks back, I visited the firefighters on B Shift, Station 1. That's the firehouse that's downtown, flanked on the north by St. Augustine Church and on the west by some giant, empty building that's rumored to have been a community center at one time.

I was invited by my next-door neighbor, who is a member of B Shift. He says his name is Jason West, but it sounds made up to me. I'm thinking Witness Protection Program. He moved in a couple years ago and, when he's home, he's always making improvements to his house--tile floors, new kitchen ... if he wasn't dragging my property value up along with his, I'd probably be really annoyed at his initiative in the face of my studied slackerosity.

Anyway, last year, I told him that my daughter, Darlene, was heading off to Cornell. He got this funny look on his face. When I asked him what it was about, he said that he had grown up in a small town about a half-hour's drive from Ithaca, New York.

Personally, I think the look was one of shock that someone who looks like me can have a kid in the Ivy League.

Station 1 is one of the old-style, two-story firehouses. They have the poles, the upstairs sleeping quarters, and the fire truck with the ax on the door. It's all very testosterone.

I was there at dinner time and the food looked quite edible. They had made chicken enchiladas and beans. I didn't eat because I was going to go work out after I left, but it smelled really good. (Tucson City Manager Mike Hein told me that he was at a fire station one day and they not only insisted that he eat, he HAD to have seconds. "I don't usually eat lunch," Hein said, "but they had this look on their faces ... I didn't want to insult them. Seconds was a bit much, though.")

One thing I was amazed to learn is that they have to buy their own food. It's probably for the best for a couple reasons. If the City was providing the food, the taxpayers would probably have to hire a $70,000-a-year busybody nutritionist to make sure the firefighters were eating balanced meals. Plus, it would be hard to explain why one-third of the budget goes for ice cream.

Another potential problem is the "steak factor." One of the guys told me that they went shopping for food one day and the crew had decided to have steak for a special occasion. They all threw in extra money for it, but when they guys got to the grocery store, other shoppers looked at them sideways. One woman actually said, "So that's where my tax money goes? To buy you steaks."

They have two TVs and apparently the viewing often splits along generational lines. The night I was there, they were all watching Fear Factor, which I found weird. Actually, I find it weird that anybody watches Fear Factor.

One of the stars of B Shift is Andy Gerrish, son of local TV legend and long-time owner of Szechuan Omei restaurant Magdeline Gerrish. The Salpointe grad is gregarious and has an encyclopedic knowledge of firehouse tales, some hilarious and some harrowing. He tells stories of fires and rescues, pranks and danger. They're stories that the others have all probably heard before, but they don't lose any impact by being retold.

Others join in with anecdotal additions and the shared laughter washes over the place. A couple nights earlier, my neighborhood had been hammered by a storm, so I asked about rescuing knuckleheads in flood waters. One guy tells a story of how he was on a ladder truck and was forced to lean out over the rushing water to pluck the car's occupants to safety.

"I pulled one person and then another. I was exhausted because I had to lean out and all my muscles were aching. There was this old lady still in the car. I reached out and tried to grab her, but she was just sitting there. I finally got a hold of her and she just sat there. I said, 'Can you help me a little bit here?'

"She said, 'I'm paralyzed, you (jackass)!' So I (readjusted) and yanked her out of the car. Only thing was, her pants stayed behind. She was pretty cool about it. She looked down and said, 'Just throw me in the damn water.'"

In the time I was there, Jason and a couple others went out on a call. Some woman had tripped on the sidewalk and split her head open. That's got to be hard to do; you'd have to tuck and everything. They took her to the hospital and came back.

Before I left, I asked, "So, do any women work here, like on Rescue Me?"

I'll have to tell you that story some other time. 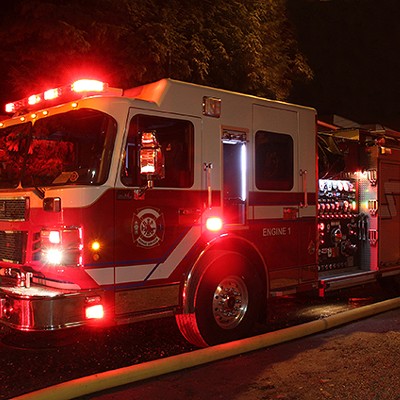