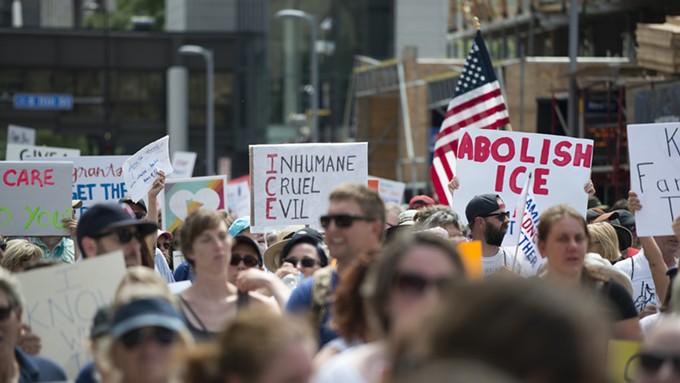 It might make you feel good in the short run (although I'm not really sure why), but know this: It is dumber than the dumbest thing that the dumbest dumbass on the other side could ever thinking of saying. You go out in the middle of the desert and whisper "Abolish ICE" and 50 million white voters in the middle of the country hear "Open borders"...with a background chorus of "Amnesty, amnesty, oooh."

After the Republicans lost the election of 2012, there were some serious discussions of reaching some kind of consensus with the Dems on immigration and putting that particular issue to bed for a while. A significant number of Republicans thought that the issue of immigration was a loser for their party, especially in the long run, what with the inexorable march of shifting demographics.

But somewhere in the deep, dark recesses of the right, somebody realized that the topic of illegal immigration was still a winner for Republicans, especially if you could strip away any pretense of it being a political issue and turn it into a warning cry of "The Brown People are coming. They're coming by the thousands in the middle of the night. They want free stuff from the government...and they talk funny." That strategy worked, and it continues to work. And it works so well that cries of "Abolish ICE" play right into its sweaty little hands.

I'd be willing to bet that the vast majority of Americans—Republicans, Democrats and independents—support what ICE's mission is supposed to be. Obviously, they're not doing what they're supposed to, and certainly, the current administration has weaponized the agency. But calling for its abolishment without anything to take its place is political suicide.

We realize that the Republicans somehow managed to elect a Giant Illiterate Turd to be President. His lowbrow gravitational pull has yanked the middle of the country far to the right. But we can't react to his vulgar rhetoric by going all the way over to the left and then try to start tugging. That's not going to work.

We need to go to what used to be the middle and try to find a message that will resonate. These people are already terrified of the aforementioned brown wave. Telling them that we want to get rid of the line that stands between them and "Despacito" becoming the new national anthem is not smart.

ICE doesn't need to be abolished, but it could certainly use a course adjustment. That job should fall to Congress, but the nearly 300 Republicans in the House and Senate don't have 33 vertebrae between them. It's up to us.

Instead of shouting about getting rid of ICE, why not use the Giant Illiterate Turd's words against him? His favorite boogieman is MS-13, the violent gang, many members of which are in this country illegally. Why not use ICE to go after them full force and after you've rid the country of that menace, then you can go after the guys working in the meat-packing plants and the women picking produce in the fields?

We're letting the Giant Illiterate Turd have it both ways. He wants to scare the average American with the gangs, but then he uses what should be his elite gang-fighting force to go after 5-year-olds so that the gang menace can always be there to scare people over to his side.

I'd be willing to bet that a huge majority of Democrats (myself included) believe that our country needs to be in control of our borders. We need to know who is entering and under what circumstances. That's not a Republican standard; it's an American ideal. Unfortunately, the G.I.T.'s words are so vile, some people feel they must flee all the way to the other side to maintain some kind of ideological purity.

There's an old joke about a guy who goes up to a woman at a party and asks her if she will go to bed with him for a million dollars. She says, "Yes, I suppose I would."

He then asks if she would go to bed with him for $50. She gets very upset and asks, "What do you think I am?" He responds, "We've already established that. Now, we're just haggling over the price."

The fringe is not where the battle will be won and it is not where we should establish our beachhead. I'd guess that maybe 10 to 15 percent of Americans don't want any immigrants, legal or otherwise. And maybe .01 percent (if that) want to let everybody in. The rest of us are in the middle, so it just becomes a matter of numbers and nuanced philosophy.

Almost all Americans want secure borders. It can be argued that ICE isn't fulfilling its stated mission, but in order to get it to do so, we're going to need a Congress willing to nudge ICE back on track. Calling for the abolition of a law-enforcement agency is doing Trump's work for him and is not going to win us any elections.

And if you still have the urge to shout "Abolish ICE," just think how stupid Trump-ers sound when they say they want to get rid of the FBI.