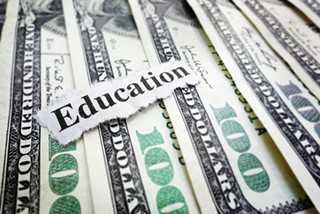 Not long ago, there was a headline in the op-ed section of a nationally known newspaper that read, "Can We Stop Fighting About Charter Schools?"

My initial response to that question was an emphatic "Oh, hell no!"

The piece's author, Eve L. Ewing, tries to walk a tightrope pointing out the gaping flaws in the charter system while expressing hope that, with everybody on board, the problems will just magically disappear. Basically, her muffled cry of "Why can't we all get along?" didn't work when Rodney King tried it and it's not going to work now.

Her argument is that charter schools are basically entrenched in the educational system, so why not just shrug and go along. Charters are here to stay, so stop pointing out the hypocrisy behind their creation and the incredibly uneven quality of the education provided by charters. Some people might think that charters are here to stay, but I used to think that there was no way that Shakey's Pizza and Chicken would ever go out of business and there you go.

Most people who hold education dear know about the sordid political machinations, the vulgar hatred of public-school teachers by Arizona's elected officials, and the outright criminality that ran unchecked during the first decade of charters in our state. Arizona probably lost hundreds of millions of dollars to outright fraud because the legislators who were in such a rush to get the charter sham going that they forgot (or did they?) to provide any oversight for where the taxpayers' money was going.

(For those of you who weren't in Arizona in the 1990s, crooks would rent an abandoned convenience store building, send in a phony list of students who were "attending" their "excellence academy," cash the check, then skip town. It happened a lot, but nobody knows how many times and with how much loot.)

Nowadays, some of Arizona's charter schools claim to have a patina of respectability. There is the much-despised BASIS, the high-pressure academic factory that churns out test-taking burnouts. The latest thing is the chain of charter schools owned by hedge funds. At last count, Arizona has at least THREE high schools named American Leadership Academy. Yeah, OK.

I have no doubt that the teachers and parents of charter-school students want those kids to succeed. But if the entire system is built on a false premise and, to this day, is wide open to fraud and mismanagement, it's ridiculous to suggest that we should just embrace it and move forward.

There was a reader's comment recently in this publication claiming that "That the Black Lives Matter people would form an alliance against school choice is an abomination." It's such a lazy argument to claim that being against charter schools is the same as being against "school choice."

In fact, Arizona parents have had a choice as to where to send their kids for decades now. And they have always had a choice of sending their kids to private school; they just had to pay for it. Now, "school choice" means using taxpayer money to defray the cost of sending kids from wealthy families to a private school that they were going to attend anyway.

It's like the anti-vaxxers whose empty arguments revolve around "protecting one's medical history." Ain't nobody cares about your medical history, whether you've had gallstones or hammertoes. We just want to know if you did your part to help us get our country back on track. If so, you can go to the movies with us.

One of the numbers that jumped out in the article is that only 19% of all charter schools outperform their (closest in geography) non-charter peers in reading and math. I don't know, I only got my math education in public schools, but it seems to me that 19% is a pretty crappy number.

Again, to be fair, 19% is better than less than 1%, which is where charter schools stacked up against real public schools for the longest time. So, in the past quarter-century, we're up to 19%. If (and that's a big IF) that trend continues, charter schools will be all the way up to mediocre by the year 2061 (which is also the year that Halley's Comet is coming back).

How many kids will fall through the unmonitored charter-school cracks (as untold thousands have done in the past 25 years) in the Republican legislators' never-ending quest to give public-school teachers the middle finger? For that matter, how many unscrupulous Republican legislators will bend the law in their favor so that they can enrich themselves at the public trough? And finally, how many years will pass before those of us who truly care about education just give up and accept the charter-school myth?