Danehy: The prophets of Hollywood sure knew what was on the horizon 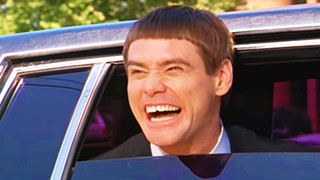 When did the writers of great movie lines get to be so prescient?

—Lloyd Christmas in Dumb and Dumber

Arizona Senate President Karen Fann, who has authorized the spending of hundreds of thousands of your tax dollars in search of anything that might keep her hysterical cries of election fraud alive, is facing the endgame of her expensive and dangerous assault on democracy. Her minions, simply by handling them, have permanently tainted the Maricopa County voting machines, which will now have to be replaced. And the ballot count, which never should have happened in the first place and was supposed to be done in March, crawls onward into August and will now be followed by yet another count.

But earlier this month, Fann, all full of herself (and crap, as well) stepped to the microphone and, with a bravado that is sure to play well with her inbred Caucasian constituents up in Prescott, announced that there is "a discrepancy" between the number of ballots that have been counted by the conspiracy theorists in the colorful vests and the number of ballots cast that was reported by the Maricopa County Board of Supervisors.

But, what is the discrepancy here? A difference of one ballot out of 2,089, 563 cast? Or 10? Or even 100? All would be perfectly reasonable. Just ask anyone who has had to count a stack of currency. The bills are all of the same denomination, so you just have to count the number of bills in the stack. Do it three times and the odds are that you're going to get three different answers. And, in this case, you've got dozens of knuckleheads—all with an insidious agenda—counting millions of ballots.

The really weird thing would be if the numbers matched exactly.

We know that the tRump-lickers want to find something (anything!) to back up their increasingly wacko claims (bamboo ballots?), but wouldn't it be a hoot if they actually counted fewer ballots than the number cast? Mathematically speaking, that's just as likely as finding a surplus of ballots in the count. If they told Fann that there were too-few ballots in the count, she could still save face by using the big word she just learned.

In the movie set during the

time of the Negro baseball leagues and the segregated major leagues, Richard Pryor's character Snow keeps trying to sneak into the Majors, masquerading as a Native American (Chief Takahoma) or a Cuban (Carlos Nevada, which means Charlie Snow). When people would tell him that he couldn't play for the Yankees because of his race, he would say, "Oh, I'm not a Negro. I'm a Cuban."

As it turns out, that's the new get out of jail card in Florida. After vile Florida Governor Ron DeSantis used a pliant legislature to push through racist voter restrictions and give Donald Trump a sweetheart casino deal (like Trump could actually make a casino work!), he then crowed on national TV how he didn't give a damn about COVID. (In the past couple weeks, Florida, which has 6% of the nation's people, had 20% of the latest COVID cases.)

One of DeSantis's favorite vulgar actions was the passing of a law that made many forms of political protesting a crime, with many protesters facing felony charges. But last week, when Cubans (who tend to vote Republican) living in America shut down one of the main highways in the Miami area as a protest against the government in Havana...not one arrest. When asked about it, DeSantis's reply amounted to "It's okay; they're Cubans."

were tough (except for Ted Cruz, who skips to Cancun). But when three guys wrote a book poking holes in some of the myths surrounding the Alamo, some Texans in power went nuts. Instead of fixing the power grid that caused some Texans to DIE during last winter's storm, the Governor and Lieutenant Governor got a museum to cancel an appearance by the authors because (gasp!) somebody was actually telling the truth about the Alamo. For example, Mexico, which controlled the land on which the Alamo sits, did not allow slavery and Davy Crockett and others not only owned slaves, but they also wanted Texas to be a slave nation or state.

The Texas Legislature took time away from trying to see to it that Black people in Houston don't vote next time to enshrine the false narrative about the Alamo in school curriculums across the state. So now, Texas school kids—the majority of whom are Hispanic—are going to be subjected to the Heroic Anglo Legend of Texas "history" and not both sides.

When will then be now? Soon!

Remember when Democratic and Republican leaders alike used to ridicule the likes of Joe Sweeney and his fellow crackpots? Now the Republican leaders are writing checks to the crackpots. If we don't all stand up for free, fair and inclusive elections in America, when will democracy end?