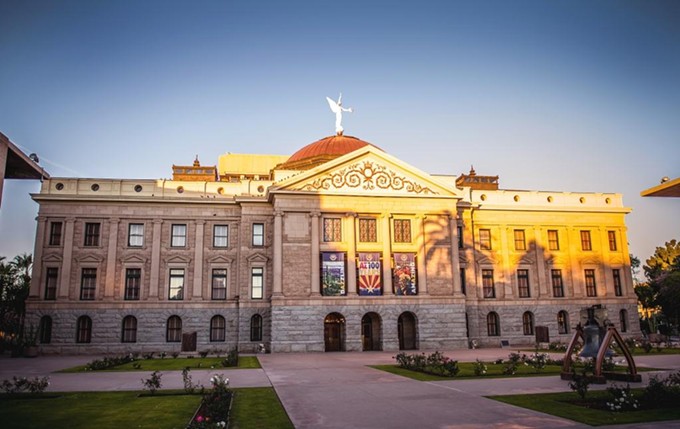 At one time or another in his life, dumbass Kyrie Irving of the Brooklyn Nets has stated that he believed that the Earth is flat, that Man never landed on the Moon, and that the COVID vaccine would make him sterile and/or Bill Gates’ B-word. But, in Kyrie Irving’s defense, not even he is stupid enough to believe that even one Republican in the Arizona State Legislature gives even the slightest crap about education.

Over the past 15 years, the record of Arizona Republicans when it comes to education has been boneheaded, shameful, and (I contend), for an extended time, criminal. Would-be lawmakers were willing lawbreakers.

When the Great Recession hit in 2008, Republicans in the Legislature went to school leaders, hat in hand, begging for a one-year pass from having to live up to constitutionally mandated funding for schools. “Oh please,” they pleaded, “just this one time! The national economy is in the polluted aquifer that’s under the foaming septic tank that’s under the overflowing toilet. We simply don’t have enough money to keep all the rich white people happy AND pay for the schools. So, please, just this once, okay?”

The educators, foolishly believing in crazy ideas like shared sacrifice and the integrity of one’s word, said OK to the one-year deal. Then, one year turned into five and then 10 and then…we’re still counting. The legislators, having duped the teachers, used the severely slashed (“one-time only”) education budget as the new benchmark. They shirked their responsibility, flipped off Arizona’s school kids, and dared anybody to try to do something about it.

Finally, a huge majority of Arizonans from across the political spectrum said, “Enough!” They told the Legislature, in no uncertain terms, that our schools are more important than tax cuts for the country clubbers. This, of course, did not go over well with those who believe that they know so much more than the people whom they are supposed to be representing. (The dead giveaway for these toads is when they chant the brain-dead mantra of “this isn’t a democracy; it’s a representative republic.”)

Well, it is that until the People get tired enough of the jackasses in the State Capitol and start bringing forth petitions and propositions and referendums and changes to the State Constitution, effectively going over the heads of the “lawmakers.” That, of course, really makes the elected members of the Goldwater Institute Claque angry. They don’t like being told what the People want. They already know what the People NEED!

And so they have now come again with the Vouchers For Everybody routine, which got slapped down by the People by a 2-1 margin in a direct democracy vote. Vouchers are stupid, they’re selfish, and (I hate to tell them this) they go against everything that the Republican Party used to stand for. Some of us remember when the Republican Party was the party of self-reliance. Now it stands for (or perhaps kneels before) the concept of welfare for the rich. Someone once said that NFL team owners (who share almost all revenue) are “32 Republicans who vote Socialist.”

The Republicans in the Arizona State Legislature talk Republican, but vote Socialist when it suits their narrow purposes of putting money in certain people’s pockets.

The whole idea that vouchers can help low-income people send their kids to private schools is preposterous. Tuition at a decent private school is probably in the $20,000 a year range. What good is a $7,000 voucher going to do? There are only two types of people who will benefit from the universal vouchers—those who can already afford private school tuition and private school operators.

Here’s how it works: The private school has the tuition set at $20,000 a year. Jonathan Smythe can afford that amount and happily sends his kid to the school. Then, the Republicans in the Legislature tell everybody that there’s an extra seven grand to be had for nothing. The school raises its price by $5,000 to help keep the riffraff out (and to substantially increase its bottom line). Mr. Smythe passes the voucher money along to the school and ends up making money on the deal as he now only has to pay $18,000 in tuition.

Arizona’s voters saw through this scam when the Legislature passed similar legislation in 2017. A ballot measure was drawn up, petitions were circulated, and in 2018, voters killed the voucher expansion by a two-to-one margin. Now, it looks like we have to do it all over again as the Arizona Legislature last week passed an even larger expansion of vouchers than it did in 2017.

Pastor (and voucher advocate) Drew Anderson of the Legacy Christian Center is quoted as saying that what voters did just four years ago doesn’t matter. He points out that Donald Trump won Arizona in 2016, but lost the state four years later. With Arizona’s leftward shift, the voucher giveaway will probably go down by a 3-1 margin next time.

There is a slang move in Spanish that involves the right index finger being slammed down into a cradle in the left hand, accompanied by the shouting of the word “toma!” It basically means “f—- you.”

By odd coincidence, the push for universal vouchers is being led by House Majority Leader Ben Toma.