Charles F. Price
One of the few remaining pictures of the first Best of Tucson editorial meeting.
click to enlarge 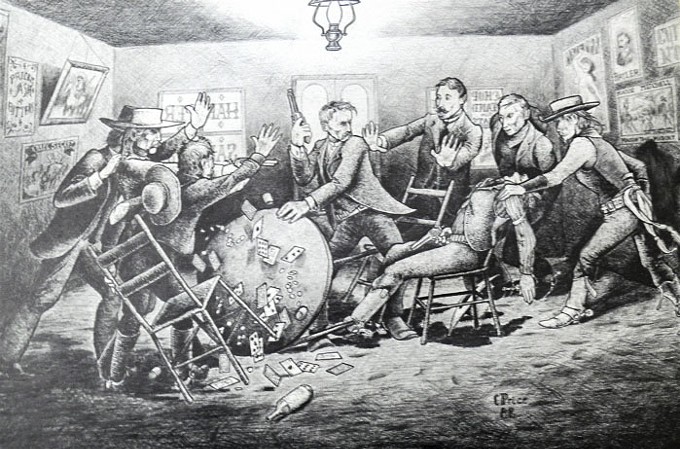 Charles F. Price
One of the few remaining pictures of the first Best of Tucson editorial meeting.

I really can’t believe that I’m still doing this. It’s been years since we did the first Best of Tucson issue and now we’re doing it by electric light. What’s next? Moving pictures?

It was supposed to be a one-time deal, a way to settle a few arguments that had been bubbling up among the newspaper staff. Instead, it started more arguments than it settled and it was funner’n chasin’ a jackrabbit through a corn maze. (That was actually the first winner of the Best Fun Thing To Do On a Sunday Afternoon category.)

Josephus T. Biggers, the first publisher of this fine publication, thought that we should celebrate all the good things about Tucson, other than the delightful year-round temperate weather. He wanted to point out the many great things that have helped Tucson’s population explode past the 2,000 mark. At this rate, we could hit 10,000 by the middle of the 20th Century.

But that’s a long way off. We’ve still got almost a full decade left in this century.

I remember the first Best of Tucson meeting. We actually held it in a barn because The Grange meeting house was being used by the Ladies’ Auxiliary. It was me, Howard Allen (who quit the newspaper business to go join up with a traveling minstrel show), Josephus, Sharpshooter Jeff Smith, and, just to add a lady’s touch, we invited Barbara Kingsolver, the schoolmarm who fancied herself a bookwriter.

Man, how she would go on and on about that Antigone book store! And now look, she’s got a book in the window of that place. (I ain’t read it yet. I think it’s a nature book about Trees or Beans or something. I told her I’d get to it after I finish with Twenty Thousand Leagues Under The Sea by Jules Verne.) I’ll tell ya, that book makes you glad you’re sittin’ in the middle of the desert when you’re reading it. The scene with the giant octopus ’bout gave me the vapors. It reminded me of the time I found a few gold nuggets out by Benson and I made the mistake of telling the dance hall girls about my good fortune.

That became my short-lived fortune. I’m pretty sure I had a good time that night, though.

Anyway, we met to talk about what we would call the Best of Tucson. There were some spirited discussions about who was the best blacksmith and who was the second-best blacksmith. Then there was the battle between the two ice cream shoppes. One served delicious vanilla ice cream, but the other one had two flavors: vanilla and not-vanilla. The not-vanilla was probably just vanilla with something dark thrown in to make it, you know, dark.

By far the closest vote by the staff that night concerned the question as to where one might trade in his livestock. By one vote, Buffalo Exchange edged out Bison Switches.

When the edition came out, there was an uproar. Folks got downright contentious about some of our choices, which was exactly what wise old Josephus wanted and expected. Heated talkin’ leads to fervent readin’. (Our circulation almost doubled overnight, from 75 to 143.) I still have that first issue and I treasure it.

We, of course, covered the news that week, as well.

There was this item: The new Pima County Sheriff, Clarence Dupnik, is thinking about posting young boys at the corner of Stone and Congress to report on which riders and buckboard drivers are ignoring the standard right-of-way protocols. There have been several incidents involving people trying to cross that intersection on foot and there was the big shoot-out last month between the stagecoach and a big wagon from Mr. Diamond’s ranch.

The Sheriff thinks that if he fines enough people for failing to yield the right-of-way, it will bring some law and order to that intersection. But some people think that he’ll just be trying to line his pockets with the money collected.

The head of the Cattleman’s Association calls the idea “downright stupid.” He adds, “Whoever has the biggest wagon gets to go first. We shouldn’t have to slow down or stop. That’s always been the law of the West. I suppose we could do our civic duty and give out a shotgun blast to let people know we’re comin’ through.”

Then he added, “Knowing the Sheriff, he’ll probably hire foreign boys to be the lookouts.”

We all know how that turned out. Them power-grabbin’ varmints at the Territorial Capital up in Prescott made it illegal for towns to pass any laws involving traffics on city streets. So watch your step, and not just to avoid steppin’ in the horse hockey.

Some of the other headlines from that issue included:

The first Best of Tucson thing I wrote was about Wee Anthony’s Eatery that had just opened out east of town. I wrote:

Big Daddy said that things are “getting’ too modern” so he wanted his eatery to remind folks of the good ol’ days of the 1850s.

People are able to carve their own steak off the carcass of a cow. “The only rule we have is don’t cut off more’n you’ll be able to chew,” Big Daddy warns. “We also cook up their taters the way they want.”

On Saturdays, they line up all the buckboards and decide which one is the best looking. And, as a special treat, they have people dressed up as Queen Victoria and Millard Fillmore so folks can stand next to them and have an artist draw a picture of ’em with the famous person.

The Best of Tucson has become a local institution. I’m honored to have been a part of it over the years. Right around the time when it gets too cold at night to bed down on the sleeping porches, we get the Harvest Moon, the Best of Tucson, and that day when our Mexican neighbors paint their faces and try to scare their dead kin.  (We’re not sure what that is about. We get different explanations from different people.)

Over the years, we’ve gotten rid of some categories (Best Lookin’ Dance Hall Gal, Best Spitoon, and Best Barber/Dentist), but we’ve also added some new categories, like Best Quick Draw Artist (Still Alive) and Best Town Marshal (Also Still Alive). As we close out the 19th century, we will continue to celebrate the great things that help make Tucson so wonderful. And for our readers (and those who went to charter little red schoolhouses and thus have to have it read to them), the Best of Tucson® will endeavor to always remain the Best…of…Tucson®.