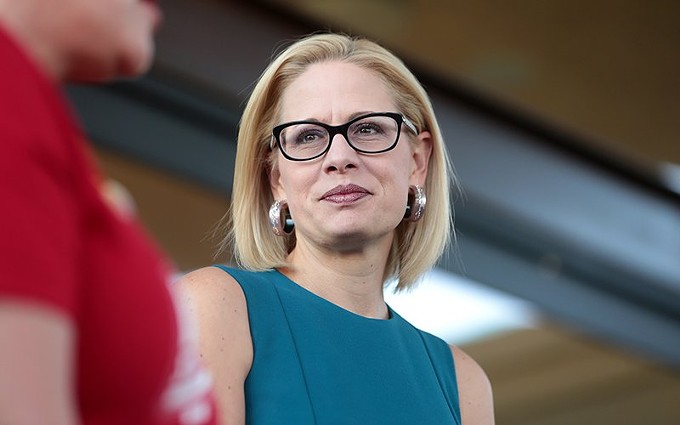 We can’t recall her. The Republicans in the Senate certainly won’t do anything to her. She’s their staunchest (and strangest) ally. We’re going to have to trick her. We should get President Biden to appoint her as Ambassador to Cotton Candy Land, where everything is pink and sweet and there are no mean people trying to figure out what is bouncing around in that hollow head of hers.

1. She’s freakin’ nuts! Now, I know that it’s crazy for a layperson such as myself to try to psychoanalyze somebody, but this one’s easy. Maybe she’s one of those high-functioning sociopaths that we see in the movies. Those things never end well.

2. Her absurd fascination with the filibuster is allowing Senate Republicans to run out the clock on this vital legislative session (nothing will get done next year because it’s a midterm election year) while their counterparts in various state governments do all they can to make future elections for whites only, thus ensuring that America’s clear majority will be disenfranchised, ignored, and maybe even subjugated by tyrants who will do anything to cling to minority power for the next few years.

She’s like the basketball player standing in the lane on defense who watches somebody drive straight to the basket for a layup. When asked later why she didn’t help, she will say, “I had my man; she didn’t score.” When America turns into something that’s not America, how hollow will her words sound when she says, “I stood up for the filibuster, an outdated and horribly misused anachronism.”

3. She and her partner in gross incompetence, West Virgina Democratic Sen. Joe Manchin, are content to fiddle while democracy burns. And it’s burning.

4. She’s the most embarrassing member of Congress from Arizona and that’s really saying something. You might figure that it’s Andy Biggs, who got up in front of God and everybody and put in the official Congressional record that he doesn’t know who won the presidential vote in Arizona in 2020. He does. They all do. It’s just that, between them, they don’t have the combined capacity of one testicle and therefore can’t bring themselves to utter the truth. Biggs’ justification for repeating the Big Lie: He claims that someone who worked at a polling station “had some concerns.”

Sinema pretends to be serious, but she’s a buffoon.

7. She’s like the idiot who has a bumper sticker that reads “I’m a maverick.” True mavericks would never feel the need to publicly self-identify. And neither do they ostentatiously attempt to prove it on a daily basis.

8. I know that it’s a matter of personal style (or complete lack thereof) and Lord knows no one will ever accuse me of being a slave to fashion, but I’m not a United States Senator, for goodness sake! How does she expect anybody to take her seriously when she shows up to work dressed like she spent the night on a park bench after being thrown out of the monster truck rally for being too obnoxious?

I completely understand that no man should EVER tell a woman how to dress, but she is in Washington doing a job for her constituents. She’s got to know that many of the knuckleheads with whom she must deal (at least partially) judge her by her appearance. If she wants to be taken seriously, maybe she can start by taking herself seriously.

10. She was elected under false pretenses. She caught the luckiest of breaks, running in a midterm year against a horribly flawed Republican candidate (Martha McSally) who had doomed her chances by tying herself to the worst president in United States history. (McSally would stupidly repeat that mistake in 2020, all the while being humiliated by Trump.)

She should leave now before she can do any more harm.