Dancing to a New Tune 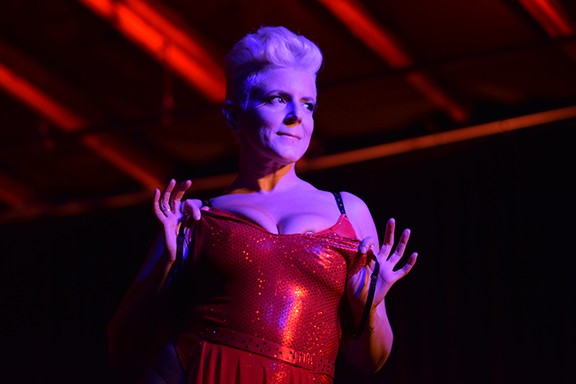 Clara Migoya
Lola Torch performs for the audience of 191 Toole, in the REVEAL show, October 18.
Emilie Marchand came to Tucson in 1999 with no idea she would become one of the biggest figures in the town's burlesque movement.

She still holds mixed thoughts on what led her to perform and produce shows under the pseudonym of Lola Torch. Maybe she got it from her father's side, descendants of French vaudeville musicians.

"I'm curious whether or not those things travel in our genes," she said.

From a young age, Torch, 43, has had a taste for applause and theatrical musicals, but the transition toward cabaret was not obvious from the start, she said.

"(Burlesque) didn't exist in my mind or any place back then," she says.

Torch has almost 15 years of experience in the cabaret, owns a burlesque fitness workshop downtown, trains a growing number of newcomers at her own burlesque production, the Tucson Libertine League (TLL), and recently launched a lingerie brand named "Hi Tiger!"

She runs the REVEAL workshops, where she introduces newcomers into burlesque as they develop a character, mentors them in the creation process, and hosts shows for their debut.

Alex Mazur, a.k.a. Misstress Ceratops, joined REVEAL three years ago. She was looking for a liberating and risqué feeling, and she found it.

"Being a performer with Lola is something I like to brag about, and I don't brag often," said Mazur. "Once seeing her on stage, you won't forget her."

Torch arrived in Tucson in the late '90s at age 23. She had visited the city as a teenager and the desert never left her mind. Lured by memories, she returned shortly after she finished her studies in upstate New York. She was only "backpacking through," she says, but never left.

At the time, the town was smaller, but there was a lot of art and music, Torch said. "It just seemed very funky and cool," she said.

Within a week of her arrival, she found Flam Chen, a company of artists specializing in fire and circus performance. "They caught wind with the fact that I sing," she said.

She would be suspended in a large birdcage and a fire performer danced at her feet. She sported black hair, a feather boa and a friend playing the cello under her. She sang cabaret.

"This is it," she remembers herself thinking at the time. It was that "underground vibe" she was looking for.

She chose her name, Lola Torch, out of her taste for Marlene Dietrich's character in The Blue Angel movie and a love for sentimental songs. There was a darker, serious side in performing that spoke to her—something her mother associates with an "Irish melancholy," she says. Although burlesque is not serious by definition, Torch said its role was to entertain in the face of crisis or disaster. Hopelessness was confronted with cleavage, comedy, music and extravaganza. Born in the Victorian era, it was a theatrical mockery to entertain the lower and middle classes, using sexuality as a luring element, she said.

Up through the 1940s, burlesque assumed a variety of forms in the United States, much of it derived into modern striptease and men's clubs. As men became prominent in the show production, female participation was restrained to a sexualized role, without the richness of comedy, politics or absurdity that burlesque was born with.

Burlesque is still a form of entertainment that is risqué and light of clothing, but its resurgence in the 1990s speaks to a different audience. The neo-burlesque scene is increasingly a self-asserting act of sexuality represented by a myriad of marginalized bodies and identities.

"We are not doing this for the male gaze," Torch says.

After her debut with flam Chen, Torch started performing and producing burlesque shows with the Black Cherry Burlesque at the Surly Wench Pub on Fourth Avenue. Then, in 2017, she started the Tucson Libertine League, an alternative show production company that honors "burlesque's history of innovation and boundary bending."

"What we have created is a safe space for burlesque artists," she said. "It is my role and responsibility to make sure that it maintains those ideals."

The Tucson Libertine League is now a continuously growing community that welcomes a myriad of bodies and stories that usually don't find their way onto stage, she said—open to all races, gender identites and sexual orientations.

She is passionate about what burlesque can bring into people's lives.

"Any time you step in the burlesque stage as a performer, you are telling whatever story you want to tell," she says. "Having that element of sexuality brings people in, in this nice inviting way, and what we do then is totally up to us."

For Torch, burlesque is a political statement. "For some people that's just showing up in stage with their body," she said. "No matter what size, shape, color or ability." She said she believes this is the foremost contribution of their art.

"It gives an underlying story," she said. "We are not seeing one cookie-cutter type of human. That's what is so appealing to the audience."

it's friday night and a dozen

Tucson Libertine League performers prepare to go on stage at 191 Toole. As Torch presents the third performer, the lights go out.

In a full-body motorcycle outfit, at 5'10" feet tall, Tender Furiosa stares into the audience behind a sturdy helmet. The rock music on the background goes louder, she throws the helmet away. We see her eyes roll back as she twitches with a pleasuring smile.

Furiosa has been on stage before, since 2013, in the Manly Manlesque Show at the Surly Wench. Looking back at the acts she did then, she realized that every time she performed it was kind of a joke. It was not who she was, she said.

It is Furiosa's third year in the league and the fifth as a transgender woman. What she does now, she labels as transmasculine drag burlesque.

"I haven't had many opportunities in the Tucson burlesque to show what I can really offer," said Furiosa.

The Tucson Libertine League offered her a space to "perform masculinity and have fun with it," she said. It became a supportive environment where anything could happen. "It gave me the space and trust to breathe and grow. A sense of safety," she said.

Furiosa knew Torch back in 2013, when she was in the Black Cherry Burlesque show. She says that when Torch invited her to perform in the TLL, it gave her the chance to transform at her own pace and explore.

"I owe burlesque, as an art to find myself," she said.

Torch also sees the Tucson Libertine League as a community.

Setting rules into place and leading by example is a big part her role, she says, but there is a particular softness that attracts people alike. She paces and moves her hands in circles; "It's not something that I can get a hold on, but it's magic."

Although Torch has faced confrontation from women who claim she is objectifying herself, she says that modern burlesque is a great platform for feminism.

"I'm in control here," she says, "I'm the one telling the story. And I'm going to take my clothes off, not because I want you to like my body, but because I like my body."

Clara Migoya is a bilingual reporter, and a master student in Journalism and Latin American studies at The University of Arizona. Twitter: @ClaraMigoya