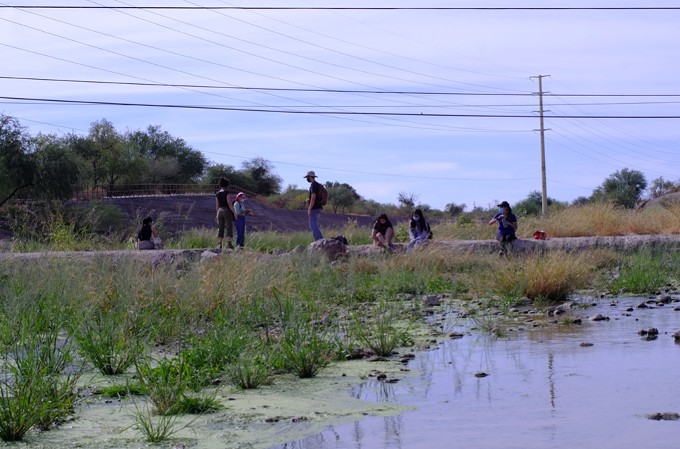 A group of local stewards sits along the downtown reach of the Santa Cruz River. Every Sunday, they pick up trash and remove invasive species as a part of a grassroots reconciliation project. (Photographs by Angel Breault)

Since November 2020, a group of local volunteers has worked to remove the garbage and invasive species surrounding the downtown reach of the Santa Cruz River in Tucson. Through their efforts, the group hopes to encourage the return of more native species to the urban ecosystem and foster stronger community connections to the river.

The group meets every Sunday morning under the Cushing Street Bridge. They are primarily focused on cleaning up the stretch of the river between Mission Wash and Congress Street, but they plan to work on some of the surrounding tributaries soon.

The project was initiated by Angel Breault, a local naturalist, educator, and documentarian who has lived in Armory Park neighborhood in downtown Tucson for most of his life. Growing up, he spent a lot of time in and around the dry riverbed of the Santa Cruz, which was about half a mile away from his childhood home.

Breault is calling the project "Reconciliation on the River" or "Reconciliación al Río." The project has three objectives: reconciliation, learning and, most importantly, justice. He hopes to actively foster a sense of indigeneity along the river by not only reseeding native plants in the area, but by also teaching people about the diversity of connections to the river.

"When I talk about justice and re-centering the idea of what it means to be from here, it means looking at each of our individual connections to this place to gain a more collective understanding," Breault said. 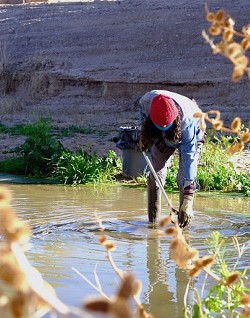 Isaiah Kortright pulls trash out of the Santa Cruz River in Tucson, Ariz. on Jan. 24, 2021. While the area is much cleaner due to the efforts of local stewards, garbage continues to appear along the river due to the urban nature of the environment.

At a young age, Breault became involved in the environmental education department at the Arizona-Sonora Desert Museum. His experiences at the museum fueled his passion for the cultures and biodiversity of the Sonoran Desert. Breault now serves as the program manager at educational nonprofit the Ironwood Tree Experience, where he develops intersectional environmental curricula relevant to the cultural and ecological systems of the southern Arizona borderlands.

"The Santa Cruz is integral to the biodiversity that has historically been supported here and to the cultural legacy of this place," Breault said. "For millennia, ideas and goods and people have moved up and down this area just like biota."

The land along the river at the base of Chuk-son — the Tohono O'odham name for "A" Mountain and the namesake of Tucson — has been cultivated by different peoples for at least 4,000 years. In fact, it is recognized as the longest continuously cultivated piece of land in all of North America. From the Hohokam to Spanish missionaries to Mexican rancheros, communities have relied the Santa Cruz to sustain them.

Up until about 70 years ago, the downtown reach of the river flowed year-round. "There are still people alive today who have seen the Santa Cruz with water and swam in the river underneath cottonwood trees in downtown Tucson," Breault said.

As more and more people started to move into the area during the late 19th and early 20th centuries, the river slowly began to dry out. Between 1860 and 1960 alone, the population of Tucson grew from just 915 people to about 212,892 people, according to a report from the city of Tucson. During this time, ground water was pumped unsustainably to support the growing population and the economic development that soon followed. By the 1940s, the natural perennial reaches of the Santa Cruz in Tucson ran dry.

After decades of limited flow along the river, Tucson Water implemented the Santa Cruz River Heritage Project in collaboration with other state and local agencies to recharge the aquifer, restore flow to the downtown reach and revitalize the riparian habitat. On June 24, 2019, they started releasing treated wastewater into the riverbed right near the heart of downtown Tucson.

When the water was initially released, it flowed from a discharge pipe near West Silverlake Road all the way to Speedway. Since then, the flow distance has fluctuated depending on how much water was released and how quickly the water sank into the ground.

Michael Bogan, a University of Arizona aquatic biologist, has studied the Santa Cruz River ecosystem for the past five years. During that time, he has seen the water flow as far as Grant Road and as short a distance as Cushing Street—roughly a mile and a half to three miles from the discharge pipe.

Maya Teyechea, a hydrologist at Tucson Water and project manager for the Heritage Project, referred to the project as a "complete success" because bringing water back to the river has led to a greater abundance of native species and increased public enjoyment in the area.

Cyclists, hikers and city dwellers alike now marvel at the blue and green ribbon that lines the formerly dry riverbed. Kate Hiller, a project volunteer who has lived in the Santa Rosa Barrio for 35 years, said she's even seen families picnicking along river since the flow was restored.

"The river had been written off as a ditch for so long," Breault said. "To see vibrance and movement and diversity just appear out of nowhere, I feel like I watched a miracle happen."

After watching the water and life return to the downtown reach of the Santa Cruz, Breault started to notice a large amount of garbage and the invasive species encroaching upon the river. He decided something needed to be done to address these threats in order to protect it. 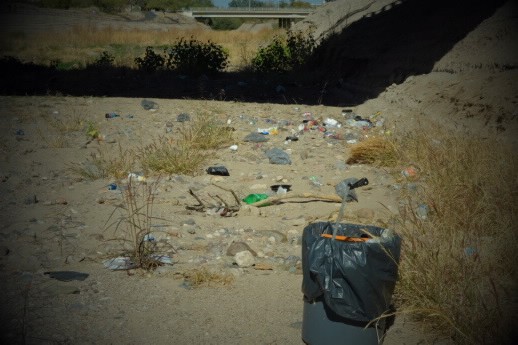 Trash and invasive species continue to threaten the newly flowing Santa Cruz River near downtown Tucson. Every week, a group of volunteers works to remove these threats to protect the urban ecosystem.

With binoculars in hand, he started going down to the river to remove trash, buffelgrass and tamarisk. Initially, he worked alone and took the time to identify birds and native plant species along the way. But after a while, nearby residents started to notice his work and asked if they could participate.

He now has a rotating crew of about 10 to 15 people who help out every Sunday. The stewards come from a diverse range of ages and backgrounds, but they all have the same goals in mind: protecting the river and bettering their community.

"I think right now, especially with so much being shut down, this is a really good way to connect with friends and family and do something that's good for the community," Hiller said. 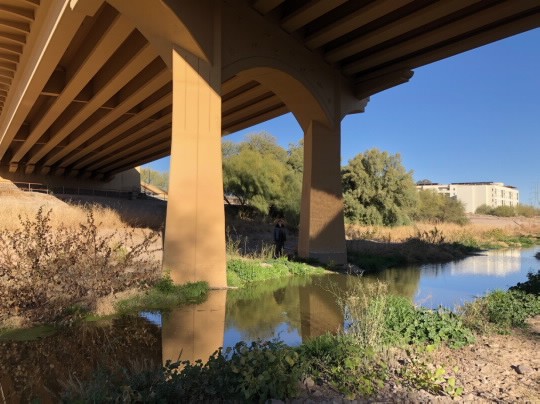 The Santa Cruz River flows underneath the Cushing Street Bridge in Tucson, Ariz. The restored flow is a result of Tucson Water’s Santa Cruz River Heritage Project. Since June 24, 2019, Tucson Water has released reclaimed water into the riverbed from a discharge pipe near West Silverlake Road.

"Restoration is a fallacy"

Breault has intentionally labeled this work as a "reconciliation project" rather than a restoration project because the Santa Cruz River can never be fully restored to its original condition.

"Restoration is a fallacy," Breault said. "It's not really an accurate term for the work that we do to rehabilitate environments after we have caused immense destruction and devastation within them."

Historically, the Santa Cruz was almost a mile wide. It flowed and flooded and spilled and dried across a floodplain that spanned from "A" Mountain all the way to what is now Granada Street in downtown Tucson.

The river's flow is now restricted to a channel lined with soil cement that was installed by Pima County starting in the late 1970s. But the lined channel is not the only factor limiting the restoration of the desert river.

When the Santa Cruz originally dried up due to groundwater pumping in the 1940s, people began to mine the floodplain of the river for sand and gravel. After the mining was complete, there were several pits left open alongside the river. These pits were eventually filled with garbage.

This all occurred prior to the environmental movement of the 1970s, so it's possible that hazardous materials were dumped into the pits. If the water table rises high enough to a point where it actually starts to submerge the bottom of the contamination areas, there is concern that pollutants could leak out of the pits and into the aquifer.

Several contamination sites still exist anywhere from 25 to 45 feet below the ground along the Santa Cruz. The most concerning of these sites, according to Teyechea, lies just west of the river at the "A" Mountain Landfill, which was operated by the city from 1953 to 1962.

Tucson Water closely monitors the ground water level to ensure that it stays at least 10 feet below the contamination areas. Since they started the Heritage Project, they've had to adjust how much effluent they release into the riverbed to keep the water table below that limit. They've found that consistently releasing about 800 gallons per minute supports the riparian habitat while also keeping the water table at a safe level.

The Santa Cruz can never flow like it did historically under these constraints. For that reason, many advocates of the river want to move away from the term restoration.

Bogan explained that true restoration of the ecosystem would involve removing the landfills and all of the development that lies in the historic floodplain of the river and bringing up the water table, which would displace thousands of people from their homes.

"The only thing I use the term restoration for is restoring flow to the river," Bogan said. "We have done that, but we need to think a bit more creatively about what's possible for the ecosystem given the constraints downtown."

Breault says the term reconciliation more accurately describes the work his group does because it recognizes the constraints of the modified system and highlights the goal of restoring community relationships to the environment. Through the project, the team hopes to make amends for the actions that altered the system so dramatically while allowing space for people to connect to what the river is now.

Breault recently started collaborating with local stakeholders, like Tucson Clean and Beautiful and the Sonoran Institute, that will aid the project by supplying equipment, helping with waste removal and engaging in citizen science related to waterway pollution. He plans to continue the project indefinitely and hopes to inspire more people to invest in the river along the way.

"The history of our people — regardless of your race, creed or culture — is in this landscape and is captured in this river," Breault said. "If we hope to continue to sustain life and connection along our river, we must reimagine how we engage with one another and the land that holds us."

If you'd like to participate in the reconciliation project, you can meet Breault and the volunteers underneath the Cushing Street Bridge along the Santa Cruz every Sunday from 9 a.m. to noon. Breault supplies volunteers with personal protective equipment and restoration tools.