In an enclave of artisan shops and galleries, The Monterey Court Cafe serves delightful food and a good stiff drink 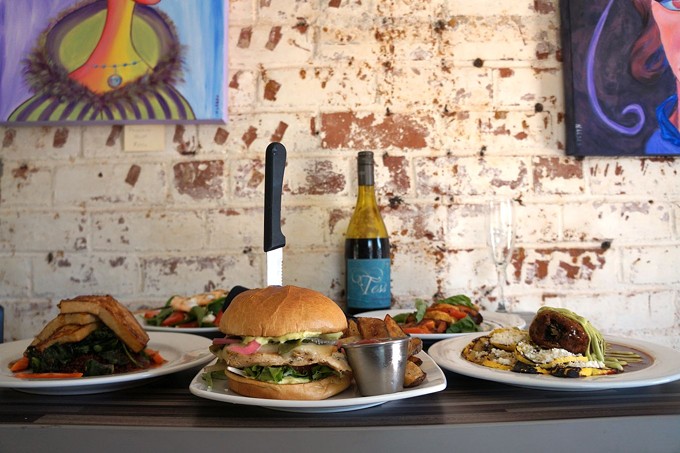 Mark Whittaker
From chicken and brie to vegan tofu, Monterey Court has something for everyone.

For decades Miracle Mile was the place to be and be seen here in Tucson. It had lively clubs, upscale restaurants, social arenas and motor lodges for those visiting our quaint desert township; the main drag, if you will, of entertainment and nightlife vivacity.

But then, the freeway came about in the 1960s and things began to change. Roadside motor lodges became cheap motels, nightclubs turned into stripper halls and by the 1980s Miracle Mile was now the few blocks of Tucson to avoid. But in the early 2000s the new police station opened up on the stretch and certain "elements" began to scatter. Later, thanks to the good people that want to reclaim Miracle Mile as a neon destination of food and frolic, it is slowly becoming the joyful expanse that it once was years ago.

The Monterey Court was built in 1938 and when Greg Haver bought it in 2011, it was a boarded up wreck.

"Luckily I am a builder so I took this project as a challenge," Haver said. "It was a really distressed property at the time, chain-link fences, boarded up windows, the whole deal. I thought giving the Monterey Court new life would be fun and to do something totally for myself."

With the Miracle Mile renaissance in its gradual state, Greg decided to revamp the court and turn it into a fresh and creative go-to location. Right now, there are several art galleries, a salon, retail spaces, a massage studio and even a tattoo parlor. Most importantly, at the center of it all, is the recent addition of a café and bar equipped with a large patio that features some local and traveling musical acts. Most people come for the culture, but what brings them back is the quality of food and drink.

"I tell you, it was a real struggle getting the Court back up and looking sharp," muses Haver, "but we love being a part of the Miracle Mile rejuvenation. This is definitely not your father's Miracle Mile and folks feel safe now coming here, which was the whole idea in the first place."

One would think that with all of the art and music happening on a regular basis, the food would be an afterthought. Oh no. Hence the article here. For those that have yet to dine at the café, you are in for a fortuitous treat. Haver and his kitchen staff are all big fans of comfort food and they run with that notion, then make their own twists on some tasty traditional fare. Having sampled a good amount of food from the café, I can honestly attest to its purpose and conviction they serve on a plate.

A favorite brunch item so far has to be the Chicken and Brie ($10). It's a lot to take in on an early Sunday, but if you were up all night dancing and boozing then this is the fuel to stoke you back to life. It is a seasoned grilled chicken breast sitting on a toasted bit of sourdough, met with some red onion and this delightful sun-dried tomato vinaigrette before getting tempered with a good amount of melted brie. Throw in the Montegria Sangria ($7), packed with fresh seasonal fruit, red wine and peach brandy, or a Jalapeno Cucumber Margarita ($7), and you can keep the party going.

Later, as the band is setting up, veggie lovers will embrace the Vegan Tofu dish ($13) that employs a combo of wilted spinach and kale atop a bed of toothsome quinoa and a very flavorful apricot ginger remoulade. Plus, the tofu is really firm and affectionately seared so meat addicts won't miss a thing.

The café also has a charge of delightful burgers, deli sandwiches, salads and appetizers, such as their Mussels ($15) that are overnighted from New Zealand and cooked in white wine, lots of butter, seasonal tomatoes, tons of garlic and finished with bright basil and a crostini. But so far the standout star on the menu has to be the Stuffed Poblano Pepper ($14). It is a huge Pasilla bristling with shredded chicken, rice, Jack cheese, then fried and served with a red chili sauce, grilled squash and finished with a splay of cotija. I'll put this dish up with any likeminded across this southwest culinary city of ours.

"Right now we are doing 25 percent off lunch items all summer long and the menu will evolve with the fall," Haver says. "We want the Monterey Court to be known for its quality entertainment as well as the quality food."

I'm not much of a dancer, but the food at the Monterey Court always have me do a happy jig and the cocktails keep my toes tapping.