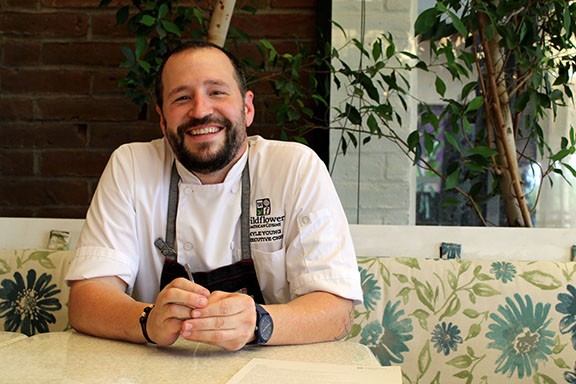 Meredith O'Neil
Kyle Young: “The concept of what Wildflower is helped mold me into the chef that I have become.”
In a high school cooking class, Kyle Young said belligerently to his teacher: "Why do we need to know this? I will never be a chef."

That didn't work out for him.

After eight years building his culinary skills working as chef in Napa Valley, Young has returned to Tucson as the new executive chef at Wildflower.

"It's time for me to mentor the next generation of young cooks and see where we can take it," Young said.

In high school, Young planned on being in the Marine Corps, but when he got his first job as a dishwasher at the local Casa Sanchez-Mom's restaurant, it set him on a different track. He quickly began his climb up the culinary ladder. Within three weeks, he told his parents he wanted to be a chef. It wasn't until working at Bistro Zin, a Fox Concepts restaurant, that he felt like he really started to cook.

After a few years working in the Tucson food scene, Young was feeling like he'd reached a stalemate. In 2011, he was cooking at The Westin La Paloma Resort & Spa, and all it took was watching an episode of "Top Chef" to make up his mind to leave town. In the episode, he heard about a restaurant called Brix in Napa Valley, and that was it, he put in his two-week notice, moved to Napa Valley and became Chef de Partie at Brix Restaurant and Gardens.

"Chris Jones at Brix Restaurant was the most intense person I've ever worked for," Young said. "He was a screamer. He was a yeller, old brigade style. I owed most of my cooking techniques to him. He showed me finesse and taught me to really dedicate myself to everything I cooked."

Young put in the work. Having never attended culinary school, he learned by cooking in kitchens and working his way into higher positions. He began working at Michelin star restaurants in San Francisco, eventually managing the certified organic garden at Bardessono Hotel & Spa.

Young kept pushing his limit, working harder and spending longer days at work. But by the time he was working as chef at Bardessono, he was married, had a daughter, and was spending little time at home with his family. His daughter, Harper, had to come to work with him in the mornings.

Harper learned to walk in the kitchen gardens. He would walk with her, picking carrots—Harper's favorite. Young would pull a carrot, wipe the dirt on his pants, bite off the long root tip, and hand it to Harper for her to eat. He decided to make carrots the amuse-bouche at the restaurant one day: wood-fired carrots with a chimichurri sauce made from the chopped leafy carrot tops. The dish was a way to tell the story of spending days in the garden with his daughter.

"When it comes down to who I am as a chef, this is me telling you through food," Young said. "I do it through tastes and memories and experiences, and I do it through the dish."

But after eight years in California working long hours, he and his wife decided to separate.

"I wasn't getting excited about it anymore," Young said.

He decided to take six months away from the culinary scene, during which he reconnected with his roots at Fox restaurants and found out Wildflower was looking for an executive chef.

"Wildflower was the first Fox restaurant, Bistro Zin was the second," Young said. "The concept of what Wildflower is helped mold me into the chef that I have become. It naturally felt right."

Young has been with Wildflower since May and says that it felt like the right time to come back to Tucson. He gushes about his team: his cooks, sous chefs and management.

Wildflower, an original Fox concept, opened 21 years ago, and was sold, along with Fox's other properties, to the Cheesecake Factory last month. Young isn't looking to make any big changes to the menu or service. The menus will continue to change seasonally, and staples of the company will still be available.

This season features dishes like their avocado toast: citrusy jumbo lump crab toppling over thick-sliced toast, a little crackly on the outside, a little chewy on the inside, and peppered with jalapeno, corn and tajin.

The chefs at Wildflower make their pasta fresh each day, and this menu offers short rib ravioli. Each tender pocket is folded with shredded short rib and fragrant with truffle cream, topped with swiss chard, roasted mushrooms and breadcrumbs.

And finally, there is a special dessert that changes daily. One day, it was vanilla panna cotta. This silky, creamy panna cotta arrived in a ramekin, layered with tart blood orange compote, buttery-salty crumble, and a perfectly round scoop of strawberry ice cream. One spoonful with a bit of every layer was an ambrosial melding of textures and flavors.

This menu, at least, needs no changes. And the food is responsibly sourced with sustainability in mind. They prefer organic ingredients and heirloom produce whenever possible.

Besides his culinary values aligning with those at Wildflower, Young also felt drawn to Fox because of the way they treat people.

"Hospitality is a lost art," Young said. Whether it's holding the door for a guest, special ordering a cut of meat on request, or giving a glass of wine to a guest who has had a prolonged wait, Wildflower has created a culture of treating people well.

Young said when people have a birthday dinner and they choose Wildflower, he understands that it's a special occasion and that choosing Wildflower was a big deal. He wants customers to remember that the tiny details were attended to, that there is passion behind the plate.