A visit from the King and Queen is great for Downton Abbey fans, but it’s just royal mess for the rest of us 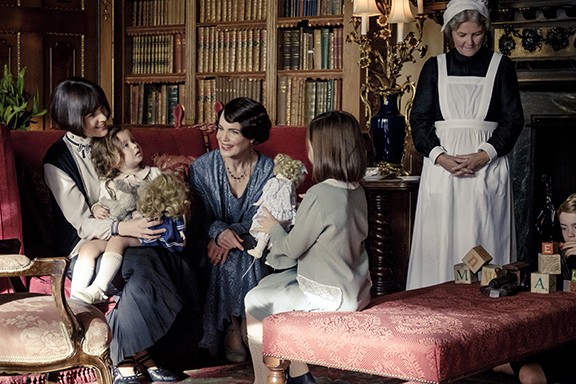 Jaap Buitendijk / Focus Features
I have never seen a single episode of Downton Abbey, the Emmy-winning British TV series that aired its last show three years ago. It's not that I have intentionally avoided it; there are just some TV shows I never get around to watching. I haven't seen Good Omens, either.

So, walking into Downton Abbey the movie, I knew next to nothing. I knew it was set in the early 20th century, I knew it was British, and I knew the awesome Maggie Smith was in it. I also knew Dan Stevens was probably not in it due to situations his character encountered during the run of the show, TV events that made the news.

This movie is a mess, although it's the sort of mess a true fan might be willing to tolerate. Director Michael Engler seems to be working with enough subplots in this movie to fuel an entire season of the former TV show, and it's painfully apparent by the pacing (especially in its first half) that the big screen is not serving the cast well.

The big plot twist here is that King George V (Simon Jones) and Queen Mary (Geraldine James) are coming to Downton Abbey, a big estate with a reasonably sized staff, for a quick visit during one of their tours. So the staff, taken a bit by surprise, must prepare for a visit from the royal family.

Much of this movie is staff running around trying to prepare for this visit. In fact, the first half of this movie is almost entirely about preparing for the visit. They go to the store for eggs, they try to fix the boiler so the Queen will have hot water, and they endure some minor staff shakeups in anticipation of the big visit. Then the visit happens, then the visit ends. That's the main thrust of the movie.

In the background, there are all sorts of little affairs and plot threads that even the most hardcore fans might have a hard time keeping track of. There's even a blink-and-you-will-miss-it assassination plot involving King George that just sort of happens, without any attention to anything resembling details. Hey, a movie where King George V almost gets assassinated should be at least slightly exciting, right? Nope, it's just something that happens in this movie, as inconsequential as one of its characters taking a bath.

The presentation of the film's first half is rushed, as if Engler is worried someone will accuse his film of being bloated and dragging. Quick little scenes happen, and then they are connected by a plucky string orchestral soundtrack that does more to annoy than enhance. Honestly, the kinetic pace of the first half of this movie reminded me of Michael Bay's scattershot Transformers movies.

I wanted this movie to slow down, and allow some of its sumptuous set designs and obviously decent cast to get a chance to be seen and breathe. The Downton staff winds up preparing a meal for the King and Queen, and not a single detail about what they prepare is shared. I'd like to know what the maid prepared for Queen Mary. Was it duck? What did they have for dessert? Clearly, the makers of this movie never saw Babette's Feast.

The last act of the film is the its best. A showdown between Violet Crawley (Smith) and Maud Bagshaw (Imelda Staunton) comes to a satisfying conclusion, proving that their part of the story probably deserved its own movie. There's no question in my mind why Smith won some Emmys for her portrayal of Crawley on the show. She's not in the movie a lot, but when she occupies the screen, the movie takes on life.

So, if I can say anything good about Downton Abbey the movie, it's that I'm at least slightly curious to watch some of the TV show (I probably won't), and see a little more background on some of its characters. I can see why the enterprise has gathered a huge throng of fans, but I can't come even close to recommending the movie they've made.