The 'Lord of the Rings' trilogy concludes with a stunningly wonderful film.

While that series won't conclude until 2005, The Lord of the Rings trilogy comes to a more than satisfying conclusion with The Return of the King. The series is officially one of the greatest film achievements of all time, and certainly tops in the fantasy genre. It kicks Star Wars to the curb.

Beginning with a fascinating look at the origins of Gollum (Andy Serkis) and ending with a sweet coda that stands as a heartwarming goodbye to a group of beloved characters, the film scores on every level. Those impressed with the nighttime Battle of Helm's Deep in Two Towers will be busy sticking their eyes back in their heads and rehydrating with gallons of water after gawking at and drooling over the daytime Battle of the Pelennor Fields. There has never been an action scene as thrilling and technologically fascinating as this one.

Featuring the famed, fire-breathing battering ram and the elephantine Mumakil creatures sweeping armies aside with their trunks, Pelennor Fields is fuel for a heart episode. When elf warrior Legolas (Orlando Bloom) takes down a Mumakil in much the same way Luke Skywalker disabled an Imperial Walker in The Empire Strikes Back, it's overwhelming movie goodness.

As for Frodo's (Elijah Wood) journey, he and Hobbit Sam (Sean Astin) provide compelling drama and action of their own as they finish the final leg of their treacherous journey. As they approach Mount Doom, psychologically troubled guide Gollum leads them astray, into the lair of a disgusting giant spider capable of very bad things. The much anticipated spider sequence, which actually appeared in the Two Towers novel, is frightening stuff, perfectly realized.

While Viggo Mortensen as the man-who-would-be-king Aragon, Ian McKellen as Gandalf and Wood all distinguish themselves magnificently, perhaps the film's greatest acting achievement goes to Astin as the heroic Samwise Gamgee. Astin has shown chops in the past (loved him in Rudy), but nothing he has done compares to his acting triumphs when character Sam is given fierce tests challenging his loyalty to Frodo.

Oscars are deserved all around for what has been accomplished with The Return of the King. Peter Jackson should be a lock, a goddamn lock, for best director. With this series, he has accomplished the finest fantasy film directing of our time, better than Spielberg and Lucas, and it should be duly noted. While nobody has taken an acting Oscar for this series as of yet, Astin should be in the running, along with Mortensen, McKellen and Wood. Throw in Serkis' crafty work as the CGI Gollum, and it would be an all LOTR Supporting Actor category.

I read the trilogy a long, long time ago. Going into the film series, I knew I loved the books, but I remembered few names, locations, events and specific plot points. Director Peter Jackson helped me to recall why I eschewed Pac-Man and Van Halen records on rainy Sunday afternoons to read the series from beginning to end. His films are as engaging as the novels themselves, and as a Tolkien fan, I'm grateful that the series wasn't approached as a live-action cinematic event until technology allowed for it to happen on such a tremendous scale.

So thanks to Peter Jackson and everybody involved with putting these films together. They are so good and so masterful, I feel privileged to have lived in a time when I could view them. If I write reviews until I'm 90, it is doubtful that I could give higher praise.

The Lord of the Rings: The Return of the King is not showing in any theaters in the area. 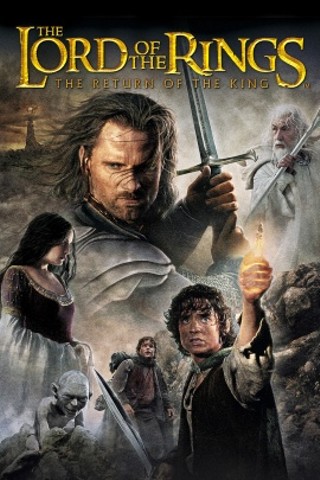