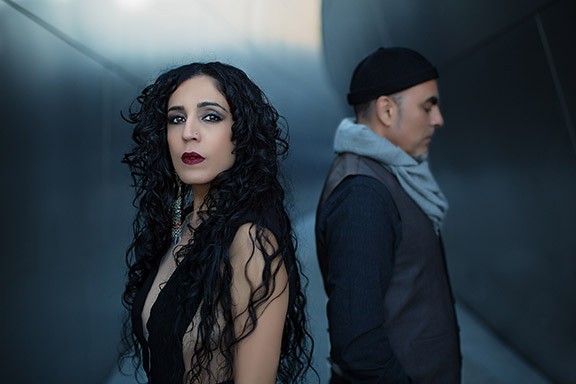 In this universe we have Niyaz (meaning "yearning" in old Persian), an ethno-electronic Iranian-American husband and wife duo blending traditional Middle Eastern acoustic instruments, medieval Sufi poetry and the ancient folk songs of Iran with the sounds of electronic music. The duo consists of Azam Ali, vocalist, composer and two-time Juno Award nominee with her husband, multi-instrumentalist and producer, Loga Torkian.

Torkian describes Niyaz's live shows, which feature a female whirling dervish and are backed by three world-class Middle Eastern musicians, as "absolutely influenced by Pink Floyd" because "(Pink Floyd's) concerts were more than a concert...they had something you could walk away with."

"There was a message to it," Torkian said. "It was more than just here comes a song, the next song and here is this song. That arch was something that made me want to listen to them from top to bottom, non-stop."

Niyaz will be performing their latest album, The Fourth Light, at the University of Arizona's Centennial Hall on Thursday, March 5 at 7:30 p.m. The album and show are a tribute to the first female Sufi mystic and poet, Rabia Al-Basri, who lived around 718-801 AD in Basra, Iraq.

"(The Fourth Light) is a concert, but at the end of the day it's a thematic concert about the first feminist of our region," Torkian said. "A lot of people believe feminism just belonged to the west. It's not true. There were women who led feminism into the East, and one of the first was Rabia."

Ali, vocalist and composer for the group and two-time JUNO music award nominee, said she and her husband wanted to make "a platform to mix the ancient with the modern, the past with the present." They started Niyaz in 2005.

"Being able to create something that we have not heard before ourselves was very artistically rewarding," Ali said. "But the really great joy was seeing how much the music was resonating with audiences."

Ali said she always "loved electronic music" and "singers who come from folk traditions, especially Turkish folk singers." But she felt the vocals and melody in 1990s and early 2000s electronic music sounded like they were "slapped on at the end." So the duo started composing their songs by recording Torkian playing the acoustic instruments, and then building the songs with electronic elements, according to Ali.

"It got to a point where we felt like 'OK, this is now a true hybrid electronic and acoustic,'" Ali said.

Torkain confesses he didn't set out to be a "multi instrumentalist by choice, but by demand" because the duo's budget was so tight during their beginning years. On top of that, Niyaz had such an unusual sound for the early aughts, it was difficult getting the public interested.

"In 2005, we launched a project that literally nobody believed in," Torkian said. "Your resources are limited. Then you finish your album, shop it around and pray that somebody at some label is going to take some interest in what you've done."

Torkian did say that he felt it necessary to "feel those spectrums" for Niyaz to grow and flourish into what they have become today—a successful electronic group that travels the world and pushes the bounds of what Middle Eastern contemporary music can be.

Ali describes Niyaz as a postmodern decolonial band that celebrates the ethnicities and religions of various Middle Eastern cultures, back when those cultures belonged to empires, not the nations of today.

The singer said being born in Iran and growing up in India before moving to North America influenced her perspective and approach to Niyaz and she hopes audiences walk away with that same multicultural perspective.

"A big part for us is celebrating the religious and ethnic minorities in Middle Eastern culture that we felt have been oppressed and still are in many parts of the region," Ali said. "So that's why we started performing."