Hemp stands ready to be the next big thing 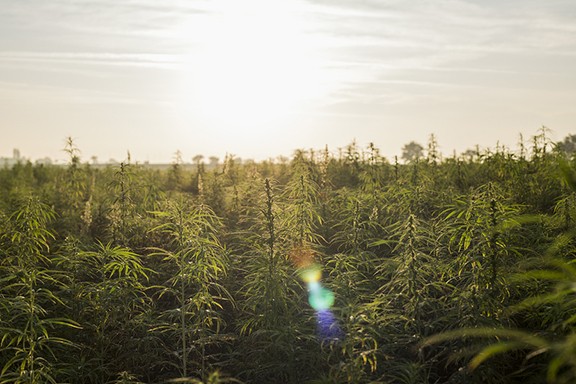 Bigstock
marijuana field
Under the cannabis sativa umbrella comes both the drug derivative and its twin, industrial hemp, one of the first plants to be spun into fiber some 10,000 years ago and now seemingly an ingredient in a gazillion products.

Former Associated Press reporter Kristen Nichols has chronicled both sides of the sister plant's story for Marijuana Business Daily and Hemp Industry Daily and calls hemp the "most exciting new opportunity to hit agriculture in a generation."

"After this crop was made legal with passage of the Farm Bill in December 2018, we've seen an absolute explosion of interest in all sectors of the hemp supply chain from seed to sale," she continued. "More farmers are putting seeds in the ground. More processors and retailers are climbing on board, companies that would not have been interested in this crop while legal status was uncertain. Once growers learned they wouldn't be headed to jail for participating in this industry, their numbers have absolutely skyrocketed."

Once referred to as "the Devil's lettuce," farmers are lining up to grow hemp in eye-popping numbers, with a 550 percent leap in growing acreage in 2019 as 34 states have already licensed cultivation of a cannabis byproduct industry that is still in its infancy.

Projections are that the U.S. market for hemp-derived CBD product applications will hit $1.65 billion by 2021 with longer-term predictions of a possible $13 billion market by 2024.

"And probably all those projections will prove incorrect because it's such a difficult industry to project just how large it will ultimately get," says Nichols.

Citing Nichol's Hemp Industry Report of the Top 10 States, Arizona's regional neighbors like Oregon, Nevada, and Colorado made that elite group while California—despite being the undisputed champion of the marijuana industry with more than 68,000 registered weed farmers—was listed as a 'New and Emerging Market' for hemp.

Gov. Doug Ducey authorized Arizona's Department of Agriculture to license qualified applicants to grow and process industrial hemp beginning in May 2019, so we're still at the crawl-before-walk-before-run stage as growers, harvesters, processors, and transporters are being licensed to commercialize the product.

But there's a future to be found here across a lot of empty desert acreage. "Arizona has good potential because land is less expensive, but the key to hemp and all agriculture in the West is access to water," Nichols said. "If you're interested in growing hemp in the desert Southwest, there's enormous opportunity although it will take a couple of seasons or more to hit on the kinds of hemp varieties that will grow best and thrive in desert soils."

Elsewhere, Oregon hemp products are positioned for national dominance thanks to an early 2009 authorization to cultivate product. That extra time has allowed establishment of a network of more than 500 hemp growers, processors, and seed producers currently cultivating 3,500 outdoor acres.

No hemp discussion goes very far without mention of Colorado, where about half the nation's hemp is produced despite a climate far from ideal for outdoor growing (12,000 outdoor acres; 2.3 million square feet indoors). Long before Congress revived the industry, Colorado farmers were putting seeds in the ground after voters legalized recreational marijuana in 2012, well in advance of written industry rules, and it's been a steady upward trajectory ever since.

Interestingly enough, in California, hemp is being considered as a crop alternative for declining wine industry vineyards, primarily as a hedge against forces driving down prices and per-acre profitability.

There's pushback from established marijuana growers there however. "Growing hemp can reduce the THC content of outdoor grown marijuana as far as 10 or more miles away, even as high as 70 miles depending on wind patterns," says Nichols.

"Californians are super-sophisticated people, comfortable with cannabis, who don't want to bother with hemp they consider a crappier version of what they already grow," Nichols says. "California's mature cannabis market players are reluctant to have hemp producers set up acreage next door although the state has the potential to become one of the nation's largest hemp producers."