Under the Trump administration, humanitarian aid is a crime 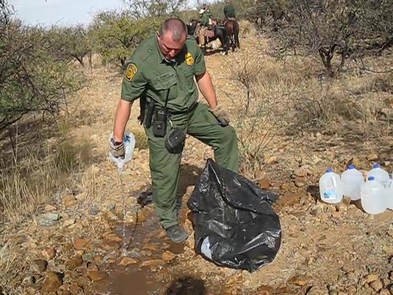 A humanitarian aid worker is being charged with a felony after giving blankets, clothes, food and water to migrants crossing the desert.

The group he volunteers with, No More Deaths, say the arrest was retaliation for a recent report on Border Patrol agents destroying life-saving supplies in the desert.

Scott Warren, an Arizona State University professor, was arrested on Jan. 17, in Ajo, at a humanitarian aid outpost called the Barn. The Barn is shared by a number of aid groups who work to help migrants in need. Border Patrol was surveilling the Barn when they saw Warren pull up in his vehicle and enter, according to court documents.

Along with Pima County Sheriff's deputies, Border Patrol later knocked on the door and found two undocumented migrants inside, who said they found the location listed online as a place of refuge. The migrants said that Warren had given them supplies to survive for three days.

Warren was charged with "transportation of illegal aliens for profit" eight hours after No More Deaths, or NMD, released the report detailing Border Patrol's destruction of water, food and blankets left out for border crossers.

Before the Trump administration, felony charges related to humanitarian aid were almost unheard of. But since Trump's election, the prosecution of humanitarian aid workers has ramped up. Warren's attorney, Bill Walker, says the charges are "clearly retaliation by the government."

"This is nothing more than the politics of this new administration," Walker says. "They prefer migrants die in the desert than get aid."

In 2005, two humanitarian aid workers were charged with felonies after transporting migrants they found in the desert who were in dire need of medical care. The judge threw out the case, and since then, there have been no similar charges—until now.

Warren also received misdemeanor charges, in December, related to humanitarian aid. He and eight other volunteer were charged after leaving water jugs, canned food and toiletry items in the Cabeza Prieta National Wildlife Refuge, an isolated and rugged part of the Southern Arizona desert where migrants cross.

In the past, volunteers may have been ticketed by Wilderness Fish and Wildlife, but humanitarian groups had an understanding with U.S. attorneys that they wouldn't prosecute, Walker said.

The Arizona U.S. attorney's office said they could not comment on these cases.

Walker said it makes no sense that Warren received these charges, adding the Barn is owned by a local doctor and was frequented by many humanitarian aid volunteers during the time the migrants Warren helped were there. Walker even said a school had a field trip to visit the Barn with close to 40 children and their teacher.

"Scott Warren didn't have the right to tell migrants whether they could come there or not," Walker says. "There's not a bit of evidence that he told those people to hide from Border Patrol."

The Barn is close to a deadly stretch of desert where, in 2017, 45 percent of human remains from migrants who died trying to cross the U.S.-Mexico border were found, according to NMD.

Before the year 2000, human remains were found in the desert, on average, about once a month. But after 2000, human remains were found, on average, every three days. Advocates and local officials have long blamed the increase in deaths to a ramping up of the Border Patrol policy Prevention Through Deterrence, which pushes migrants into more remote areas.

He says this policy was implemented six years ago, which is when some of the videos in the NMD report surfaced, adding that the Tucson Sector Border Patrol has never received a formal complaint, but if they did, an agent breaking the rules would be held accountable.

It's true some of the video clips in the NMD report are years old, but two are from the beginning of 2017.

Rules around how Border Patrol interacts with humanitarian aid workers are a bit murkier. Hernandez first said they "completely leave them alone," but added agents can approach aid workers if following undocumented migrants. He said what constitutes an arrestable offense is "hard to tell."

"Humanitarian aid is not prohibited as long as they don't take the law into their hands," he said. "I'll arrest anybody in this country who's breaking the law."

Hernandez said humanitarian aid workers without the proper licensure and training should not be offering medical assistance. NMD offers medical aid by trained professionals to migrants in need. When pressed by the Tucson Weekly on what type of licensure would be appropriate, Hernandez said it's best if anyone needing medical attention is turned over to Border Patrol.

"We are the best and most well-equipped to provide medical care," he said. "We prefer that every person call the United States Border Patrol when they see someone in distress."

He added that water left out in 100-plus-degree weather does not taste very good and pondered whether it should even be considered humanitarian aid.

No More Deaths volunteer Alicia Dinsmore says the idea that Border Patrol takes good care of those in their custody is ridiculous.