Clemency is a sobering look at the death penalty 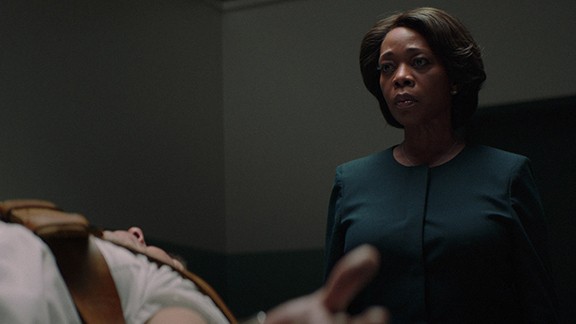 NEON
Alfre Woodard, Aldis Hodge, Richard Schiff and the rest of a very strong cast put on an acting workshop that is both impressive and important in Clemency, an unrelentingly brutal look at the death penalty. Director Chinonye Chukwu's film takes equally powerful looks at the people being put to death, and those employed to administer the tools of execution.

It's a tough one to watch, but one that you should watch.

Prison Warden Bernadine Williams is a professional, performing the duties of her job with precision and efficiency. One of those duties is to preside over executions, one of which plays out before the title credits hit the screen. It's only a few minutes into the movie that Chukwu hits you right in the solar plexus, and things don't let up from there.

Bernadine has been on the job for years, and it's taking a toll on her and her marriage to Jonathan (Wendell Pierce). Woodard shows that hardship in the type of restrained, quiet performance that takes real guts and a true mastery of one's craft. There isn't a second Woodard spends on screen where you don't buy the very real misery and sense of building guilt behind Bernadine's weary eyes.

Anthony Woods (Aldis Hodge) is on death row for being a cop killer. He maintains his innocence, having been involved in a holdup that resulted in a policeman's death, but not responsible for the shooting. Because an officer died in the line of duty, and because Woods was nearby when it happened, chances are really good he's going to pay for that policeman's life with his, no matter who did the shooting. Hodge has some moments in this film that are so heart wrenching and visceral, you fear for his well-being on this particular acting gig.

As a crusading lawyer who has fought too many battles trying to save clients from the death penalty, Schiff is a revelation as Marty Lumetta. Schiff has just a few scenes, but he makes his mark in his very first one, and carries that strength through the entirety of his moments. Dennis Haskins (Belding from Saved By the Bell!) and Vernee Watson (from Welcome Back, Kotter!) deliver convincing somber notes—far from the jovial vibes on their former TV gigs—as a victim's parents dealing with the extended torment of a prolonged death penalty procedure.

As Bernadine's slightly self-pitying husband, Jonathan, Wendell Pierce takes some risks, making his character a little on the unlikeable side while keeping him somewhat sympathetic. It's a tough balancing act, but Pierce pulls it off.

Chukwu, who also wrote the powerful screenplay, isn't interested in letting the view come up for many breaths. The message here is clear; the death penalty is beyond problematic, and it takes its toll on more than just the alleged or definite criminal. As the film plays out, any life and light within Bernadine slowly drains out. Again, major kudos to Woodard, who adds yet another remarkable performance to an impressive resume.

Watching Clemency, I was reminded of another death penalty movie, the incredible Dead Man Walking, as well as 2019's other well done but not nearly as effective death row drama, Just Mercy. The tone of Clemency is painfully dark, so prepare yourself before viewing. This is not a movie that will provide a happy time out on the town.

Not surprisingly, Woodard didn't see a lot of action this awards season, although Woodard did receive a Satellite Award, while Chukwu took the Grand Jury Prize at Sundance. Nope, Clemency is too much of a bummer for the Oscar party, and being that it isn't helmed by a big name, it's not going to get the big notices. Still, if you appreciate challenging, honest cinema that will rip your heart out, Clemency fits the bill.