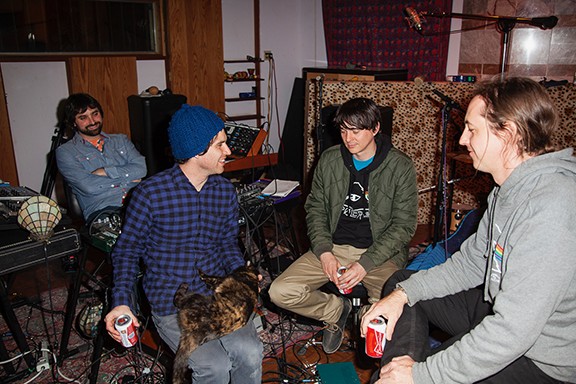 Brian Ross Weitz spent more than a year in Tucson, working as a Columbia University graduate student inside Biosphere 2 in the early 2000s.

Weitz, know known by his stage name "Geologist," will return to Tucson with pop-electronic stalwarts, Animal Collective, on Wednesday, Oct. 9.

Weitz, who plays everything from piano, percussion and synthesizers, while also mixing in samples and vocals for the band, said he's thrilled to return to his old stomping grounds.

"I'm super-excited because I used to live there. I always like coming back to Tucson when I can," Weitz said. "Tucson always took a while to sell tickets. And we recorded a record there too. I always wanted Tucson to feel like a second home to Animal Collective, but it's never really happened. Even though it feels like a second home to me. So I'm always excited to come back and hope this time we'll be allowed to feel like we're connecting with the people of Tucson in the way that I always wanted to."

Weitz and his bandmates sprung to popularity a decade ago, when they released their eighth studio album, Merriweather Post Pavilion.

That album included the band's first radio hits, including "My Girls," which helped the LP reach the No. 2 spot on the U.S. Top Independent albums chart (and No. 13 on the U.S. Billboard 200), while also reaching the Top 100 on charts in the U.K., Spain and Australia.

Weitz said the band, which is touring as a whole for the first time in six years, has a fine appreciation for the Old Pueblo, having cut albums at WaveLab Studios in the past.

The Baltimore native pointed out that he and his Animal Collective brethren have known each other since their grade-school days, with Weitz along with David Portner, Noah Lennox and Josh Dibb all attending the Park School in Baltimore County.

Weitz said he's thrilled to tour the country with his lifelong friends once again, bringing their eclectic mix of songs to the people of Tucson in early October.

"I think one thing is that, since we've been playing together so long, it's kind of second nature almost, playing with each other," Weitz said. "I mean, not that it's not hard work to put into it. But we have pretty good chemistry. We all live in separate cities, which I think helps the band in terms of staying fresh and being excited when we do see each other. It never feels like a chore, like, 'Oh, we've got to go back to work now.'"

Weitz hopes the band will draw a raucous and passionate crowd to the venerable downtown venue come Oct. 9.

Weitz hinted at the band's setlist, saying the act will mix old favorites with some new cuts that those in attendance will enjoy.

"We're going to play some old stuff, but we have a lot of new songs that we've never played live on stage before," Weitz said. "We've never improvised our way in and out of them. So, there's a lot of uncertainty and a lot of nerves. And a lot of times, those moments can fall flat on their faces. But the moments when they do work, when you finally find a way out of a song that never existed before or find your way into a song that never existed before on stage, those are the most satisfying moments."

Weitz is hopeful that a huge crowd will turn out to give the band some old-fashioned Tucson love.

"I want to go, and I want to have a great show, and show all my friends why I think this is a special city," Weitz said. "And I don't have to worry with Animal Collective, because we recorded a record in Tucson, so they like it there. And they love the desert around it. They used to come and visit me when I was at Biosphere. So I don't have to sell them on it."