The Shape of Water is wet and wild 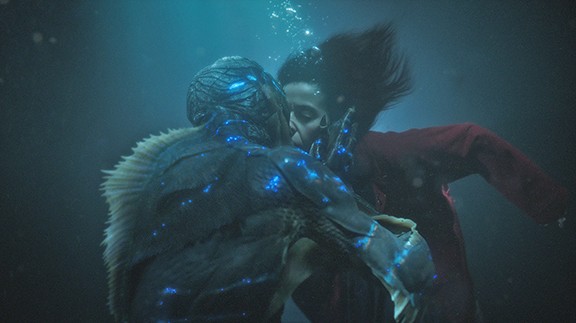 The maverick director has been merely getting by with his last couple of big screen offerings, the gorgeous but shallow Crimson Peak and the goofy but good-looking Pacific Rim. The all-encompassing magic of Hellboy and Pan's Labyrinth seemed to be eluding him. He wasn't stinking up the place, but things were looking like he may've peaked a few films ago.

The Shape of Water, for which he also co-wrote the screenplay, reminds us that this guy is a genius. He's a sick and twisted genius but a genius nonetheless.

The story set in the 1960s is—in some strange backwards way—as close to a Disney movie as del Toro has gotten. It has a lot of violence, interspecies sex, nudity and cuss words in it and, yet, it has a Disney kind of vibe to it. That del Toro; he's a nut.

Sally Hawkins, in an awesome performance that ranks as her second best of 2017 (I still say she was far more powerful in the grossly overlooked Maudie), plays Elisa Esposito. Elisa is a cleaning woman alongside Zelda Fuller (Octavia Spencer, reminding us how she's simply one of the best), and she's mute. She lives in an old movie theater next to eccentric artist, Giles (Richard Jenkins), and mostly keeps to herself.

Elisa and Zelda clean for a freaky research facility that gets a new arrival: an Amphibian Man (Doug Jones, wonderfully obscured in practical and CGI makeup) to be housed in a water tank. The Amphibian Man, who looks an awfully lot like the Creature from the Black Lagoon, is accompanied by its keeper Richard Strickland (Michael Shannon), a menacing man brandishing a cattle prod. Not soon after their arrival, Elisa hears the creature's tortured screams from the lab it's imprisoned within.

A mishap leads to Richard losing a couple of fingers, and Elisa gets some alone time with the Amphibian Man. She gives him some hard-boiled eggs and plays some music for him in what eventually become lunch dates. The two gradually fall in love (Yep!), and when word comes down the creature is to be destroyed and dissected for military purposes, an escape is in order.

The escape leads to the Amphibian Man being housed in Elisa's apartment where the interspecies love blossoms in the bathtub. Okay, I know there's a good faction of you readers who draw the line at human characters getting down with alien/godlike/Creature from the Black Lagoon characters, so this is your warning. It all happens off screen but, still, this goes against the grain for more than a few religions, so there you go.

The Amphibian Man itself is a wonder of filmmaking, perhaps del Toro's greatest visual accomplishment. Equally beautiful and fierce, not a second goes by when it isn't one of the best things put on a screen in 2017.

The Disney fairytale quality of the film is further fueled by an authentic '60s look to the movie, with much of it looking like something you would see on a dark Disneyland ride. Giles' art has a Norman Rockwell quality, and his obsession with old-timey movies completes the movie's period spell.

Shannon, representing all that was evil in man in the '60s, lets it all hang out for a bravura performance, but it's Jenkins' with his soft and funny Giles performance that has garnered award considerations. He, along with Hawkins and Spencer, received a Golden Globe nod to go along with he and Hawkins' SAG awards nominations.

It all amounts to a return-to-form triumph for del Toro, who allows his dark side to really come out and hold hands with the beautiful things. The Shape of Water is unlike anything that has come before it (well, there are hints of Starman and Splash, but neither of those offer the visual splendor of Shape). Its success will probably garner del Toro enough juice to get even weirder in the future. That's something to be excited about.