Art blossoms at the East Hive 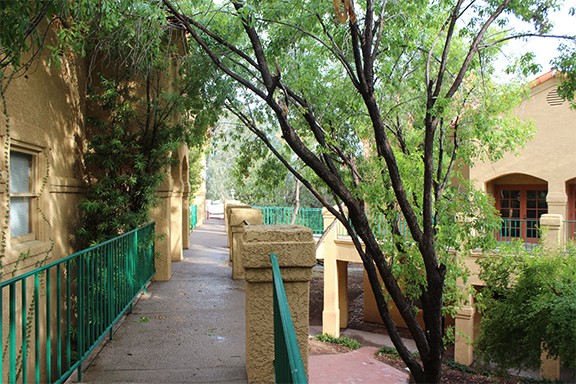 Jeff Gardner
Hive of activity: A former office complex is now a budding arts complex
A formerly empty office complex on the east side is gaining a new life as it is filled room by room, artist by artist. The East Hive is a studio complex where local artists can rent rooms and become part of a community of creators. While there is room for plenty more tenants, the East Hive already provides workspace for painters, photographers, writers, tattoo artists, aromatherapy practitioners, musicians, massage therapists and more.

"We're creating the artists' community we need here in Tucson," said Steven Eye, director of the East Hive, as well as downtown warehouse district mainstay Solar Culture Gallery. "It gives people the opportunity to have affordable space to develop what they do and expand their business, which is a hard thing for many artists."

The East Hive complex, located at 326 S. Wilmot Road, comprises three two-story office buildings, adding up to roughly 25,000 square feet and 100 studio spaces. More than 50 tenants currently work in the buildings, and each has left their mark. The once-sterile office hallways are now adorned with tapestries, original paintings, photo prints, costumes and quotes.

While the East Hive has operated out of one of the buildings for the past four years, as of June 1, all three of the complex's buildings are part of the arts community. This, combined with a celebratory open house event, has the East Hive busier than ever before.

"It's amazing where we are right now, versus where we were a year ago," said the East Hive manager Patrick Michael Orcutt, who wears multiple hats around the community. "When we started, we only had eight residents."

Aside from managing tenants, Orcutt creates art himself and maintains the buildings. He has also fostered a thriving courtyard for the East Hive that includes pomegranate trees, ash trees and wall-clinging vines.

According to Eye, the East Hive also works as a kind of refuge for artists displaced due to increasing property values and redevelopment in the downtown area that's leading to gentrification.

"They call it the Arts District downtown, but we're losing a lot of that," Eye said. "But at least they can move to places like this. We want to focus on the positive here."

Eye has worked for decades creating artists' communities, both in and out of Tucson. He's worked on Solar Culture Gallery, Galactic Center and the former Downtown Performance Center. Before moving to Arizona, he created a similar artists' space in Philadelphia.

Unlike the East Hive, Solar Culture serves more as a venue and gallery. Its location influences its mission: to bring art and music to downtown Tucson. With the East Hive in a more secluded eastside spot, it works more as a private artists' workplace. However, the years Eye has spent directing Solar Culture taught him many lessons able to be transferred into the East Hive.

"What I learned at Solar Culture is that people blossom and grow when you give them a space to activate," Eye said. "Whatever you can think of, people are making it here. It's a full spectrum of humanity and anything humans want to do that is productive and inspiring."

Not only does the complex provide private workspace for local artists, but according to Orcutt, grouping so many like-minded people together creates a nurturing and inspiring environment. Some of the residents are collaborating on new projects.

"It's breathtaking how talented some of the people are here," Orcutt said. "The people here are a collective of artists, but they're all so unique, it's like they're a collection of art themselves."

Branded as Tucson's largest arts and crafts studio complex, the buildings for the East Hive were originally built in 1984. Studio spaces at the East Hive range from $150 to $300, and can include balconies, shared kitchens and group gallery spaces.

Since the hosting their open house on June 22, the East Hive team is planning on hosting more community events, such as gallery showings.

"The real hope I have for East Hive, is, without judgment, to balance out destructive energy with beauty and culture," Eye said. "It might sound hippy-dippy or far-fetched for a lot of people, but I am hopeful." ■