10 a.m. to 6 p.m., Mondays-Fridays; through April 12; also open before ATC shows and during intermissions
Temple Gallery
330 S. Sixth Ave.
624-7370; weekend 622-2823; www.ethertongallery.com
Rand Carlson
Rand Carlson is a fine painter who can lay buttery oils onto the canvas with the best of them. But lately, he's been painting with tin.

In his entertaining one-person show at the Temple Gallery, it's nothing but tin as far as the eye can see: tin landscapes, tin still lifes, tin geometric abstractions. All of the 36 works are collages meticulously constructed out of scores of chopped-up pieces of colored tin, and thumbtacked together to create a new image.

At first glance, you hardly notice the medium. "Finger Rock Snackscape," for instance, is a lively take on one of Tucson's most familiar mountain landmarks. Ochre peaks spire prettily upward into a pale-blue cloudy sky. It's a classic Western landscape; only when you get up close do you see that the yellowy mountains and cliffs are entirely made up of pieces of printed tin crackers--from square Saltines to round Ritzes--and printed tin cookies, especially those tasty round cookies with sugar on top and a hole in the middle. But cut up and re-assembled, they "read" as mountains.

"What I love about this is that the mind, at a distance, makes it what it wants it to be," says Carlson, who also pens the "Random Shots" cartoon and The Range art for the Tucson Weekly. "The key is to take it out of context and re-assign it. The mind will say, 'That's a mountain. That's trees.'"

Carlson discovered his new medium three years ago, and he now routinely scours swap meets, thrift shops and auto yards for all manner of printed tin. He delights in the manufactured tin boxes that people buy to put their Christmas cookies in, and has learned to take in stride the frequent comment from salespeople, "You must be doing a lot of baking."

Manufacturers lithograph all kinds of images onto their tin packages. If you peer carefully at the Carlson collages, you can find fragments of tin kitty cats (their blonde fur is part of the mountains in the tiny landscape "Touchstone"), tin palm trees turned sideways and re-deployed as the craggy lines of a peak in another "Touchstone," and even a picture of olden-days ladies and gentlemen in gowns and top hats in "Tucson," an appealing retro piece with the look of a '50s postcard. A life-sized tin red rose floats at the center of "By Any Other Name."

Only rarely do the lithographed images make it intact into Carlson's artworks. He treats his raw material as a painter would his pigments. But instead of a palette with oil paints squirted into little mounds of color, he's got stacks of tin. He cuts the tin up and then separates the pieces into pile by color: mountain blue for skies in one pile, deep maroon for shadows in another, speckled yellow for desert in still another.

He's a fine colorist, and despite their hard metallic surfaces, his collages are actually quite painterly, with lovely transitions from, say, sage to earth to lime green. The wonderful "Sabino Canyon" is a delicious cascade of boulder shapes in greens, blues, silvers and grays. It reminds me of the landscapes of the late, great Bruce McGrew.

As a cartoonist, Carlson weds words with pictures, and he's also carried that aesthetic into the collages. Many of them are emblazoned with 3-D letters, gleaned from abandoned car parts. The title of "Sabino Canyon" is written across the top and bottom of the picture in mismatched letters, some script, some block, in different sizes, giving it the look of folk art. For "Catalina Mountains," a breezy long view of the range in maroon and brown, Carlson has managed to find the word "Catalina" intact, written in a saucy script, and placed it across the sky. It's a giant, 3-D, cut-tin postcard from the desert.

"Literally busting the letters apart and recombining them with their unlike cousins" gives the text works the allure of a "cut-up, ransom note," as Carlson writes in his artist statement.

There's plenty of the cartoonist's skill with word play on display, too. "By Any Other Name"--the title refers to a line from Shakespeare's Romeo and Juliet--frames the rose of Juliet's musing with dozens of other names, all in tin. Gleaned from liquor bottles, banners and boxes, they swirl around the central rose in concentric circles. Jack, Daniel, Walker, Patrick, Jim: Would any of them smell as sweet as Romeo?

Carlson's also tried his hand at abstraction. The intricate "Stripe Tease" is crafted entirely of striped tin; blue and white stripes frame the edges; pink, red and yellow bands are next, and the center is a series of tiny striped squares.

I miss Carlson's real paintings, his honest-to-goodness paints on canvas, but I would never suggest he go and tin no more. Besides being charming and original, these works are intellectually engaging, grappling as they do with the need for recycling in a crazy consumerist world. 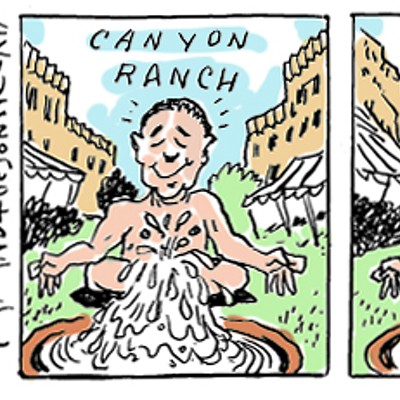