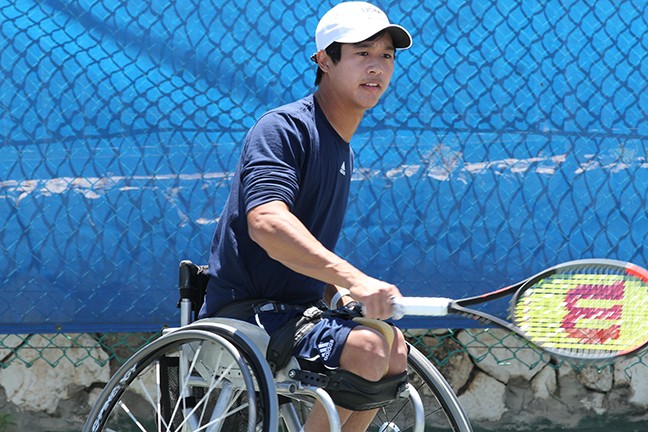 Courtesy photo
Jason Keatseangslip: “It’s fun for sure, but there’s a lot on the line when we’re playing.”
Jason Keatseangsilp’s life changed forever during his senior year of high school in a freak rappelling accident in 2011.

The accident, which occurred as the now-24-year-old was repelling down a rockface, left Keatseangsilp paralyzed from the waist down. The spinal cord injury limited him from doing many of his lifetime hobbies, including his love for tennis.

The one-time Catalina Foothill standout had to relearn everything in a flash, putting his favorite pastime on the backburner as he earned a Bachelor’s Degree in Biomedical Engineering from the University of Arizona.

The young man was a fast learner, skyrocketing up the USTA’s rankings in just over a year. Keatseangsilp is currently ranked 130th in the world in singles play and 58th in doubles competition. His rapid ascent led to a spot on the USA wheelchair tennis team, competing with four others from across the country.

The five-man American unit recently returned from its trip to Israel, where they competed in the 44-team, 16-country BNP Paribas World Team Cup, finishing 8th out of 16 squads.

The event, held in Ramat Hasharon, Israel, was an eye-opening experience for Keatseangsilp and his teammates, as they played against the best wheelchair competitors in the world.

Keatseangsilp said competing with the U.S. team contributed to the unique feeling, as he was the elder statesman of the group.

Harnett believes the United States can catch up with longtime wheelchair powers, like Great Britain and Japan, thanks to the growing impetus on developing talent across age groups. The longtime USTA coach believes that younger players like Keatseangsilp can help the national program keep up with its peers.


“Jason’s a wonderful kid,” Harnett said. “He’s new, and that’s what we like to see. We like hungry, new players. He brings a pretty high level of gratitude and talent to the court.”

The sport of wheelchair tennis shares almost all of the same rules as a regulation game, with the lone difference being that players can play the ball off two bounces, as opposed to one.

Barten, who competed alongside Keatseangsilp at the BNP Paribas Cup, said wheelchair tennis is a special sport that challenges players in new ways.

The key, according to Barten, is that players like Keatseangsilp can compete alongside anybody else, given the lack of specialized rules for wheelchair players.

Both men know wheelchair tennis in America is a step behind its global competition, but added that the U.S. collective is catching up quick.

“With new leadership and initiatives from the USTA at the national level, we are hoping to see a resurgence in the sport,” Barten said, in an email. “Support from universities like the Adaptive Athletics Program at the University of Arizona is also advancing opportunities for athletes.”

A big reason for the lag between America and its neighbors, according to Keatseangsilp, is the vast distances between competitors. The 2019 BNP Paribas Cup team, for example, included Keatseangsilp and Barten of Tucson, as well as players from California, Kansas, Washington, Oregon, Minnesota, Florida and North Carolina. Such divergent locations prohibit the squad from meeting frequently, which hampers the team’s ability to stay in-touch with each other, which further hampers their ability to work well together in events.

Keatseangsilp is hopeful that the USTA’s greater impetus on the wheelchair game will allow them to continue their worldwide ascent. The Tucson native cited the association’s recent addition of wheelchair players to its long-standing program as an example of the importance placed on the sport domestically.

Keatseangsilp’s fascination with the wheelchair game began in 2012, when he first saw a tournament in person. He was captivated by the grace and speed at which the players attacked each volley, inspiring him to pick up his racquet and restart his career.

“They were moving their chair and they were hitting the ball perfectly,” Keatseangsilp said. “The wheelchair aspect is something you don’t even consider or see as much at that level, because these guys are just moving perfectly to each ball.”

The freedom to return to the sport was a great source of relief for the young man, who shirked tennis throughout his time at Arizona.

Keatseangsilp is thrilled to have the opportunity to throw himself into the sport once again, taking motivation from each tournament he competes in.

“I still watched tennis all the time on TV, even during classes, I live-streamed matches,” he said. “I went to the U.S. Open during undergrad just to watch the sport, and I just knew after I was injured, that I would have to get back into tennis at some point.”

Keatseangsilp’s vision seven years ago is now reality thanks to a never-ended drive to succeed that has impressed coaches and colleagues alike.

Barten believes Keatseangsilp, and the other members of the U.S. men’s and women’s wheelchair teams, can serve as exemplars for future generations.

He’s confident that Keatseangsilp’s effort will lead him to future success on the courts of the world, ascending to the sport’s upper echelon in due time.

“Jason is a dedicated athlete and a great person,” Barten said. “He works hard to improve his game. The most impressive thing about Jason is his willingness to give back and support other athletes. He is always available to help beginners with their game. He attends fundraisers and is constantly advancing opportunities for other athletes.”

The sport of wheelchair tennis, while ebbing in popularity, still has a ways to go to reach the mainstream in terms of attendance and awareness, according to Keatseangsilp.

Keatseangsilp believes the USTA’s efforts over the past few years, while promising, are merely the first step in promoting the wheelchair game.

“When you’re watching the best wheelchair players, it’s pretty entertaining to watch,” he said. “One of my friends came to watch me play, and she said, ‘Wow, you’d kick my butt if we played.’ And, I think any extra exposure would help the sport so much.”

For now, Keatseangsilp is focused on improving his game so he can continue to contend as the wheelchair tennis season continues, though he sees a day when American wheelchair players can compete full-time on the international circuit without having to work full-time jobs to support themselves. Such a trend is common in Europe, Asia and Australia, but increasingly uncommon in the United States.

Having the chance to focus solely on tennis would allow Keatseangsilp and his teammates to contend with other nations at international events, like the BNP Paribas Team Cup.

“It’s just funny calling myself a full-time player in wheelchair tennis, whereas there are guys in Japan that do this for a living, basically,” Keatseangsilp said. “We don’t do this recreationally; it’s not just for fun. It’s fun for sure, but there’s a lot on the line when we’re playing.”