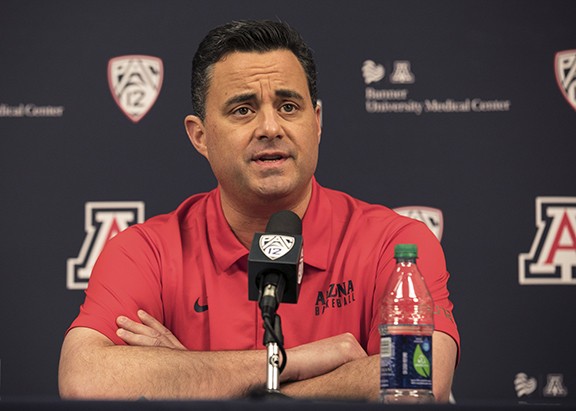 After six days of silence, University of Arizona basketball coach Sean Miller addressed allegations of impropriety from deep inside the confines of McKale Center.

Miller, who was accused of discussing a $100,000 payment to now-freshman center Deandre Ayton, flatly denied all of the allegations, which were originally reported by ESPN.

In a prepared statement, the ninth-year coach forcefully denied committing any illegal or improper actions during his time in Tucson.

Miller, whose team captured its fourth Pac-12 regular season conference title in five years on Saturday, refuted the claims made by ESPN that he had discussed a payment with disgraced agent Christian Dawkins.

"Let me be very, very clear," Miller said. "I have never discussed with Christian Dawkins paying Deandre Ayton to attend the University of Arizona. In fact, I never even met or spoke to Christian Dawkins until after Deandre publicly announced that he was coming to our school. Any reporting to the contrary is inaccurate, false and defamatory."

Miller received the full support of first-year President Robert C. Robbins and the Arizona Board of Regents later on Thursday.

Robbins squelched any rumors of a coaching change, saying the University stands firmly behind Miller and his staff. Robbins also confirmed that the University investigated the claims made against Miller, interviewing Miller during the week. Robbins and Director of Athletics Dave Heeke vouched for the coach in a released statement, saying Miller answered all questions asked and that they do not believe he committed any NCAA or federal laws.

"While some might be tempted to rush to judgment when there is intense public pressure, due process is the bedrock of fair treatment and acting with integrity," Robbins said. "With that in mind, we will continue to pursue every avenue of inquiry available to us during an active federal investigation to fully understand the facts. We recognize that investigation is ongoing, and we will continue to be respectful and cooperative through its conclusion." ■