On Tuesday and Friday, local couples celebrate their big day—with help from justices of the peace

Cherry Carter held a small bouquet of white, yellow and dark-red flowers while standing beneath a cloudless blue sky.

Wearing a fashionable black dress, shiny crimson heels and a wide, blazing-red hat, she had come to Pima County's old courthouse to marry Javier Guzman, 49, who looked cool and comfortable in a sport coat.

"I am so nervous," the 46-year old Carter said to no one in particular.

Around her, several couples—some appearing anxious, others apparently calm—were also waiting to be married by a Pima County justice of the peace.

Standing in the cool shadows of the courthouse atrium, many of the soon-to-be-newlyweds had arranged themselves in small circles with family and friends, as they awaited the fateful hour.

At precisely 5 p.m., a guard who had previously distributed numbers to the couples loudly bellowed down from the second floor: "When you hear your number, come on up."

He then yelled out a number. One couple, with their small entourage, ascended the courthouse stairway and went through a security checkpoint.

As that couple disappeared up the stairs, Heather Taylor and her fiancé, Christopher Jordan, stood in the shade just outside of the courthouse.

They met in September 2008. Why were they getting married? "Because we love each other," they both acknowledged quickly. They were only spending a minimal amount on the event, but anticipated a bigger ceremony next year.

A musician, Jordan, 33, said he wants to take Tucson to a new level and put the town on the map through music. Taylor, 27, said that she can help him accomplish that, "because I'm good with paperwork."

The Skinny: Why is Ducey acting so dumb about masks?
Top Stories

The couple's number was soon called. Making their way under the landmark tiled dome which rises above the courthouse that opened in 1928, they went up the stairs to the second floor.

In addition to acquiring the required marriage license—which costs $72 from the county—couples can arrange a Justice Court wedding on Tuesday or Friday, by calling 740-3505 between 2 and 3 p.m., weekdays. The price of the service is $60 cash, and couples need to bring two witnesses who are at least 18 years old.

On a typical Tuesday, 10 to 15 couples go to the Justice Court to get married, while on Friday, the numbers increase to between 25 and 40. On Valentine's Day, the court will do up to 60 weddings.

On this pleasant afternoon, about one dozen couples were getting married. A few minutes after 5 p.m., all of them were standing in the second-floor hallway of the court building—some pacing nervously, others chatting with friends.

Clothes worn by the participants and their witnesses were as diverse as the ages and ethnicities. The fashion ranged from a black leather dress and high heels to formal white attire, from business suits to long-sleeve casual shirts and jeans.

While all of the people waited to be called into one of the two courtrooms where the marriage ceremonies would be performed, they continued to talk or move around anxiously. As they did, 2-year old Liliana Clevenger was tap-dancing on the tile floor and playing with her father.

A cook, Dustin Clevenger, 29, met Tonia Pierce, 32, six years ago, and they've lived together since 2006. They said they weren't "into the mushy stuff" of weddings and were uncomfortable being at the courthouse. However, they said they were marrying "to solidify our family."

Pierce, a waitress and student, said she wants to be a teacher. She added that the couple is planning on eventually leaving Arizona, perhaps to move to Pennsylvania, where she is from.

Clevenger said he knew about the county marriage process because a justice of the peace performed a marriage ceremony for his mother. The couple is planning a more elaborate reception in a few months at a downtown location.

Time seemed to pass by slowly. By 5:30, newly married couples were emerging from the courtroom doors after their short ceremonies; most were laughing, smiling broadly and holding each other arm-in-arm.

Conversation had waned among those remaining in the hallway, as they clustered tightly around the two courtrooms. While the order of admittance was supposed to be alphabetical, it quickly turned into a somewhat chaotic process in which those standing closest to the door went first.

Carter, a locksmith, and Guzman, an auto-body man, patiently waited until the end. "This is an assembly line," Carter nervously chuckled. They were marrying, both said while smiling, because they loved each other.

They met in 2005, and the couple had talked of marriage for some time. Last year, they were planning on going to Las Vegas to wed, but those plans fell through.

On this night, though, a wedding would occur, to be followed by a small reception a few nights later.

At 5:50, the hallway was empty, and Judge Carmen Dolny expertly escorted Carter and Guzman into her courtroom. On the walls were four Ansel Adams black-and-white prints, while a display of a traffic intersection rested on a stand at the front of the room.

"This is one of life's most important and joyous occasions," Dolny told the couple as a friend of theirs snapped numerous photos. The judge told the friend to take as many as he wanted.

"You'll share joys and sorrows, Sherry and Javier," Dolny continued, before complimenting the bride on her ring.

Dolny then recited the official marriage vows in both Spanish and English. She ended the short but sweet ceremony by telling the newlyweds: "Keep your promises on commitment."

Carter and Guzman gently kissed and hugged as one of their witnesses vainly tried to hum the "Wedding March." The newlyweds signed papers—she used the name Sherry Guzman for the first time—and Dolny embraced them both.

The ceremony had taken only a few minutes to complete, and the just-wed couple laughed their way out of the courthouse. An almost-full moon illuminating a glorious Tucson evening was in their immediate future.

Speaking of Justice Of The Peace , Weddings 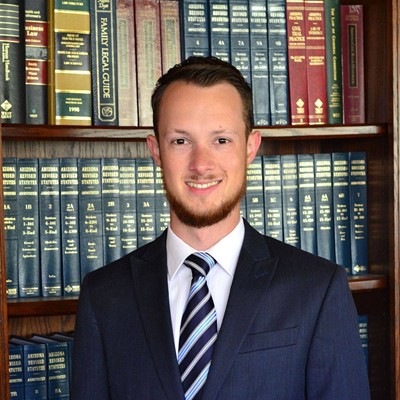