A new coalition hopes to bring power back to the neighborhoods

Natasha Winnik knows precisely when she first heard that her beloved old building would eventually come down, making way for a new road.

"Jan. 10, 2008," says the gregarious downtown business owner, standing in her sunlit shop amid eco-friendly building supplies, from nontoxic paints to reclaimed wood. "Yes, I know the exact day, because everything changes on the day you know your life will be switching phases."

The next phase will include earthmovers and concrete. Within a couple of years, or maybe three, a road project called Downtown Links will rumble through the spot now occupied by Winnik's business, Originate Natural Building Materials Showroom, which fills a 1950s, triple-brick warehouse she bought nine years ago in the Dunbar/Spring Neighborhood north of downtown.

When she moved in, Downtown Links was slated to run farther south. But a change in those plans, supported by her city councilwoman, Regina Romero of Ward 1, thrust Winnik's building into the crosshairs.

The hard feelings linger. "Regina doesn't really care about her ward," Winnik says. "Even though we went in there to meet with her the day before the vote and laid everything out, she still voted for it. She could have voted against it and stuck with her ward."

But Romero says most issues coming before the council, such as the final route of Downtown Links, demand that she weigh the needs of her ward against those of the whole city. "When I came into office, Downtown Links already had a 30-year history. ... After hundreds of meetings, a citizens' advisory committee suggested the alignment, and I voted for it. That's why Dunbar/Spring is so upset about it. But I had to make sure I balanced the needs of the community.

"In Ward 1, I've tried to sit down and have conversations and explain, 'Hey, look, this is what I think,'" Romero says. "To tell you the truth, we're not going to agree 100 percent."

Indeed, such agreement has never seemed more elusive between city leaders and the downtown neighborhoods they serve. A recent example can be found in the West University Neighborhood, where residents failed to block the approval of a 14-story student-apartment building to their east, and another gargantuan student housing project called The District on their southern flank.

Those ugly fights have not gone unnoticed by residents of other downtown neighborhoods, who recently joined West University to form what they're calling the Core Barrios and Neighborhoods Coalition, or CoreBANC. So far, the coalition includes 22 neighborhoods, ranging from Menlo Park on the west and Santa Rita Park on the south, to Dunbar/Spring, Barrio Viejo and Feldman's in the middle.

It marks the latest effort by these communities to resurrect the scrappy clout they held in the 1970s and 1980s, when neighborhoods blocked a planned expressway that would have bulldozed 45 historic homes, and helped stop an earlier student high-rise near the UA.

Their watershed moment occurred in 1985, when voters approved the Neighborhood Protection Amendment, mandating approval at the ballot box for major new roadways.

In years following, however, without big battles to rally around, neighborhood activism began to ebb. Now that may be about to change.

In the aftermath of massive, serial zoning overlays by the City Council, there's a strong sense among neighborhoods that developers are again running City Hall.

That perception only hardened when it was revealed that the student-housing builder, Chicago-based Campus Acquisitions, was intimately involved in helping city planners create an overlay zone in the West University Neighborhood.

Now the neighborhoods want to take some of that power back. The first step was creating an organization that existed at arm's length from the city and its various organs, including the Downtown Tucson Partnership, and a group called the Downtown Neighborhoods and Residents Council, or DNARC.

Richard Mayers is vice president of the West University Neighborhood Association. If he already had doubts about participation in DNARC, watching construction of the 756-bedroom District apartment complex near Sixth Street and Fourth Avenue sealed the deal.

West University had fiercely opposed the project, a stance that neighborhood reps like Mayers parlayed when they rubbed shoulders with developers and city officials at DNARC. "But at the end of the day, it didn't get you anywhere," he says. "By the time it gets to mayor and council, we get The District in our neighborhood. I don't think they were aware of us at all."

Others defend DNARC, and its mission of reaching across boundaries. Among them is Michael Keith, CEO of the Downtown Tucson Partnership, and a leading partner in the group. "I think the effectiveness of organizations is always based on the strength and passion of their members," he says, "and we're proud of the group at DNARC. We talk about neighborhood issues and how that might interface with downtown-development efforts. We try to provide a forum—like we do for all the groups at the partnership—to express their views."

Still, it sometimes appears that certain views are expressed more equally than others. At least that's one conviction behind the formation of CoreBANC. Another is that neighborhoods must offer mutual support when facing off against powerful, moneyed interests or overly ambitious bureaucrats.

Not coincidentally, nearly all of the issues bringing them together involve transportation. The issues, of course, include the modern streetcar, which will run from the university area across Interstate 10, connecting with the Menlo Park Neighborhood. While Menlo Park supports that project, "there are concerns related to the development that will result as the streetcar goes in," says neighborhood association president Gene Einfrank.

Another member of the fledgling CoreBANC is the Santa Rita Park Neighborhood, which has tussled with the city and the Regional Transportation Authority over a voter-approved widening of 22nd Street between Interstate 10 and Park Avenue—a project that threatens several homes and businesses. That construction is currently on hold, after a citizens' advisory group raised environmental concerns and other worries. When reached by phone, association president Angie Quiroz declined to comment on her neighborhood's involvement in CoreBANC.

Over in the Dunbar/Spring Neighborhood, meanwhile, Natasha Winnik contemplates shutting down her business sooner rather than later, as buildings are demolished all around. To her, each swing of the wrecking ball is an indictment of Tucson's leaders.

"They just don't seem to appreciate the fabric of their city," she says, wiping light dust from a rich brown tile, before turning to walk away. 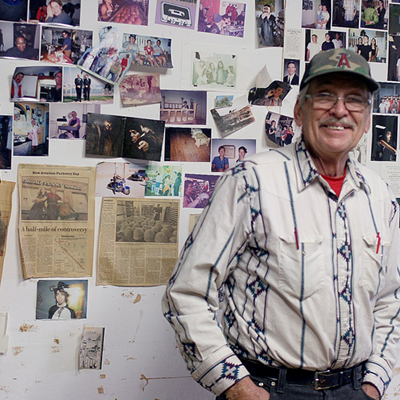